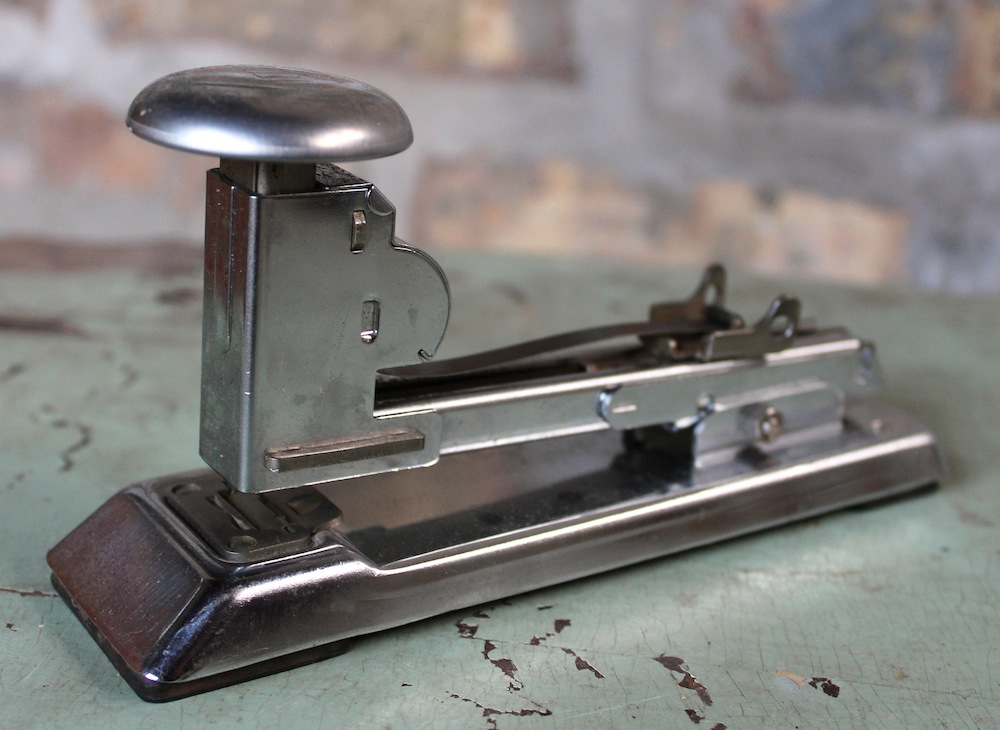 Adapted from a patent application first filed back in 1930, the Ace Pilot stapler is a fine example of a simple, utilitarian design that’s gradually earned itself more of a retro, decorative appeal. 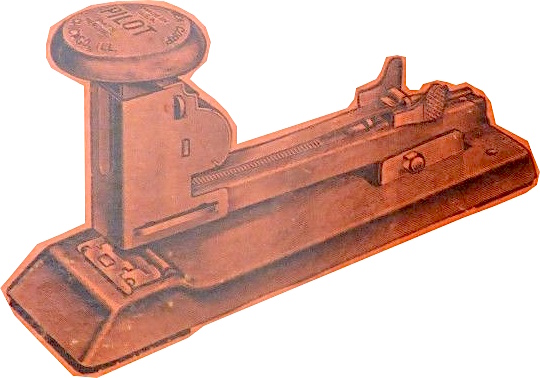 The early models were so pitch perfect in function, in fact, that subtle changes over the ensuing decades are barely detectable, making it mighty challenging to try and pinpoint the age of one Ace Pilot vs. another. The artifact in our museum collection, a Pilot 404, features the same steel construction, triple-plate finish, and big distinctive plunger handle as the older 402 model, but with an extra feature that allowed the user to detach the top section for use as a tacker. We can estimate its manufacturing date to the early 1960s for a few reasons, as brought to our attention by collector Frank Parsons over at the American Stationer blog:

As late as the 1980s, the Ace Fastener Company (by then owned by the New York banking firm Dominick and Dominick) was still based in Chicago and still producing many of its famous brands—including the Pilot, Clipper, Aceliner, and Concorde—the same way it had for half a century.

“The Ace Pilot is the stapler that established Ace Fastener Company’s reputation for High Quality Office Products,” read a 1984 advertisement. “Pilots put on the job over 50 years ago are still performing flawlessly. This timeless design features heavy gauge all steel construction for the maximum service life in a desk top stapler. Clean functional lines are accentuated with durable chrome plating and non-skid rubber pads protect your work surfaces. The Ace Pilot has a stapling reach of 3-3/8″ and a magazine load of 210 Pilot Standard Staples. For lasting beauty and time proven performance, choose a classic—THE ACE PILOT STAPLER.”

Based on comments from visitors to the museum, many of those old vintage Pilots are STILL getting the job done even 30+ years after that advertisement ran. It’s a rare circumstance in the ever-changing world of office supplies for a single product to remain relevant for this long, particularly with no major mechanical or technological upgrades along the way. But by some magical confluence of genius and restraint, William Frederick Weber—inventor of the first Ace staplers—basically got it right the first time.

History of the Ace Fastener Corp., Part I: Webs and Triangles

Sadly, there’s not a great deal of surviving info out there about William Weber’s road to glory. Despite his major contributions to the world of office supplies, his own origins and those of the company he helped organize are shrouded in some mystery (the same goes for the current incarnation of the Ace brand, as you will soon find out). We do know that William was born in Indiana in 1882, and that he came to Chicago for manufacturing work as a youngster. In 1910, he and his wife Angie were living in an apartment in Lake View; she was a seamstress and he was an assembler for an adding machine company. By 1918, being a tad too old for military conscription, Weber helped the war effort by building aircraft parts in the tool factory of the Duro Metal Products Company. Presumably, by the 1920s, he’d begun experimenting with his own mechanical designs, but it’s not until 1930—perhaps forced by economic necessity—that William finally applied for his first patent on a “stapling machine.”

“The object of the invention,” he wrote at the time, “is to provide a novel stapling machine of the small hand-operated desk type, which is inexpensive to manufacture, is light and easy to handle, and will not jam, even when roughly or improperly used.”

As best we can tell, the actual business of making this novel stapler came about through an evolving partnership between Weber and an established Chicago firm known as the Triangle Tool & Manufacturing Co., which already ran a factory at 3415 North Ashland Ave. Triangle’s president, Emil H. Bolz (b. 1884), was a master mechanic himself, and likely agreed to invest in Weber’s inventions at the outset of the Depression, including a commitment to produce them inside his Ashland plant. Together with treasurer and fellow inventor William G. Pankonin, Bolz and Weber formed a new, separate corporation called the Ace Fastener Corp., which continued to operate under the same roof as the Triangle Tool & MFG Co. well into the 1950s.

In 1938, when the Pilot stapler model was patented, William Weber was already 56 years old and serving as vice president and sales manager of the Ace Fastener Corp.; his salary, in the middle of the Depression, was a healthy $30K . . .  about $550,000 after inflation. He had a handful of other stapler patents to his credit by this point, and was now seemingly focused on refining his original vision and ramping up national distribution. Business was good, simply put, because the stapling was better.

“An indispensable accessory to every modern business office,” exclaimed an ad for a regional office supply dealer in Chattanooga, Tennessee. “The Ace paper fastener operates in the twinkling of an eye, automatically clinching together sheets of paper with a secure, neat metal clasp. The machine is small and compact, with few parts, and the expense of operation is negligible. An Ace fastener will more than pay for itself in the insurance against the loss of important papers.”

The lasting appeal of the Ace Pilot, specifically, comes down to a couple key breakthroughs and benefits. For one thing, it marked a considerable upgrade in functionality. It rarely jammed, and it included an innovative two-position anvil—meaning you could put it one position to staple something together, or shift to the other position to create a temporary hold, pin-style, that could be removed. Beyond that, there was that big shiny knob on top, just asking to be pressed. Generations of office workers took pleasure aggressively connecting stacks of paper with a gavel like slam of the palm. The side effect for the overly enthusiastic bookkeeper, unfortunately, was a bruised paw, which in turn led to the development (and eventual proliferation) of stapler designs with levers instead of knobs.

The typical looking Pilot stapler in our collection was probably manufactured at 3415 N. Ashland Avenue, which was Ace’s main plant from about 1930 to 1960. This factory not only rolled out the full line of commercial Ace staplers, but also became a top supplier of staplers and other goods to the government during World War II (due to metal rationing, “Victory” staplers from this period had distinctive wood bases). That old Ashland building is seen below, in its more recent role as the home of the Marvel Electric Co. It’s still standing, but at last check, was up for potential demolition and re-zoning as of 2020. II. Ace In the Hole

Sadly, William F. Weber didn’t make it through the war himself. He died of a heart attack in his Evanston home at the age of 60 in 1942, leaving an aging E. H. Bolz in charge of the business going forward.

In 1953, Ace Fastener employed 250 people at the Ashland plant, and business was steady. Just four years later, though, the decision was made to sell controlling interest in the company to another well-known heavyweight of the paper fastening biz, Swingline (of New York). The deal turned Ace Fastener into a diminished Swingline subsidiary, but it did at least keep the Chicago offices open a while longer. The Ashland Avenue plant was abandoned in 1960 and swapped for a new building at 4100 W. Victoria St. in North Park (which is also still in use today by a food services business), but stability in the 1960s was far from assured.

In 1966, Swingline purchased another staple of the stapling industry—Spotnails, Inc. of Rolling Meadows, Illinois—and essentially combined its business with Ace Fastener, installing Ace’s V.P. and general manager Walter M. Fisher in the same role with both firms. Just a few years later, Swingline itself was acquired by the mega-conglomerate American Brands, which eventually sold off both Ace Fastener and Spotnails company to the aforementioned banking firm of Dominick and Dominick in 1983.

Ace continued to make staplers into the 1990s, moving its home base into the Spotnails facility in Rolling Meadows. Tracking things from that point forward, however, leads us into some murky waters.

For one thing, if you google “ace fastener” these days, you’ll likely come to the corporate site of “Ace Fastener & MFG, Inc.,” a similar but mostly unrelated business based out of Camden, New Jersey. As a representative from the company recently informed us, “We are not affiliated with Ace Staplers, although we have sold them over the years. . . . I believe Spotnails bought out that Ace stapler line from the original manufacturer. As far as we know, the only stapler that is still being manufactured is the 702, and the only staples that are available are the 70001 and the 74001.”

A visitor to the Made In Chicago Museum, by the name of Jeff, offered us a few additional corroborating details:

“I was talking to the company Spotnails in Chicago the other week about getting some staples manufactured for my company, and I found out some interesting information about the 1950s Pilot stapler in your write-up as well as who owns Ace Fasteners,” Jeff explained. “Spotnails (1100 Hicks Rd., Rolling Meadows, IL) apparently bought out Ace Fastener and the rights to its designs. A manufacturer named Peace Industries from Korea owns Spotnails and Ace as subsidiaries, I think. After the guy at Spotnails told me that information, I went to USPTO.gov and checked the trademark registration (for the Pilot brand) just to be sure. Sure enough, the guy was telling the truth about acquiring Ace Fasteners.”

Yes, indeed, if you follow the long paper trail of 15 owners of the “Pilot” patent since its initial registration in 1934, Peace Industries is the current holder, with the last renewal in 2007. There was also a litigation suit over some related patents that Peace settled for just $7,500 in 2014.

Our insider Jeff adds: “It seems as if the Pilot staplers and other Pilot branded products are manufactured and sold in Mexico on a pretty large scale. I don’t think they are exporting too much of it into the U.S. Not real sure.”

Peace Industries does own locations in Mexico, too, which might explain this Spanish language AceGrapasFifa website, featuring various old Ace products.

My what a long strange road it’s been since those simpler days of the 1930s, when the world was a John Steinbeck novel and the stapler you bought just might be the last you’d ever need. 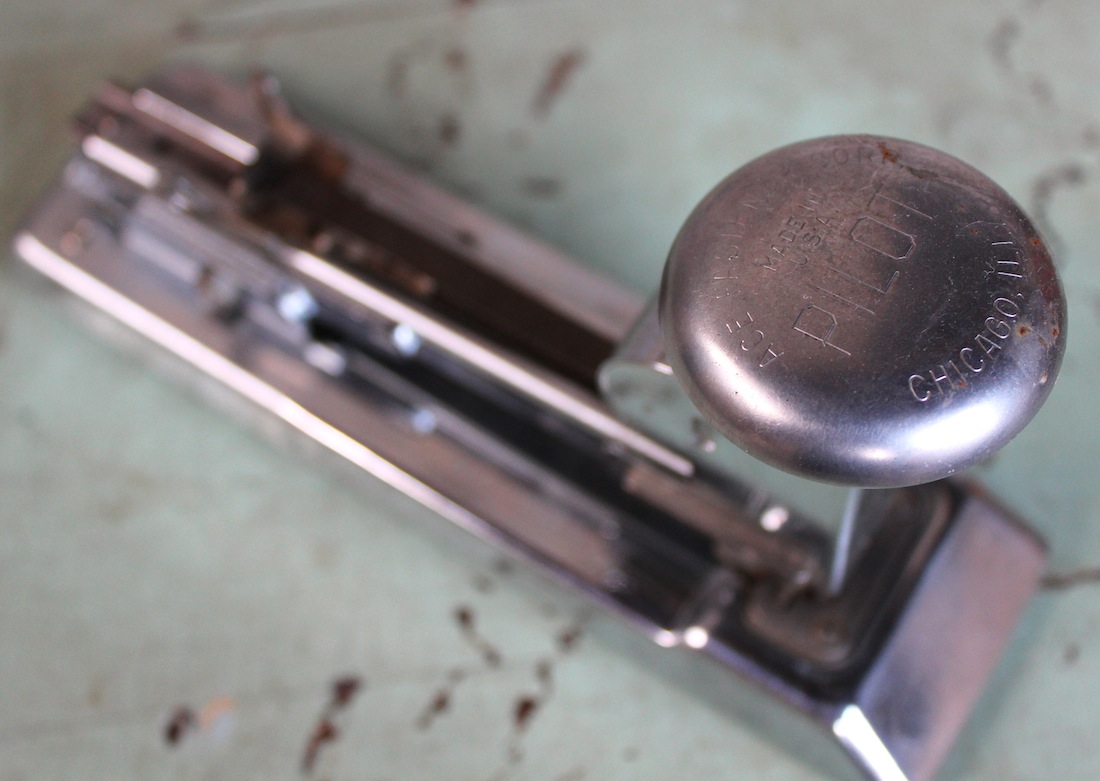 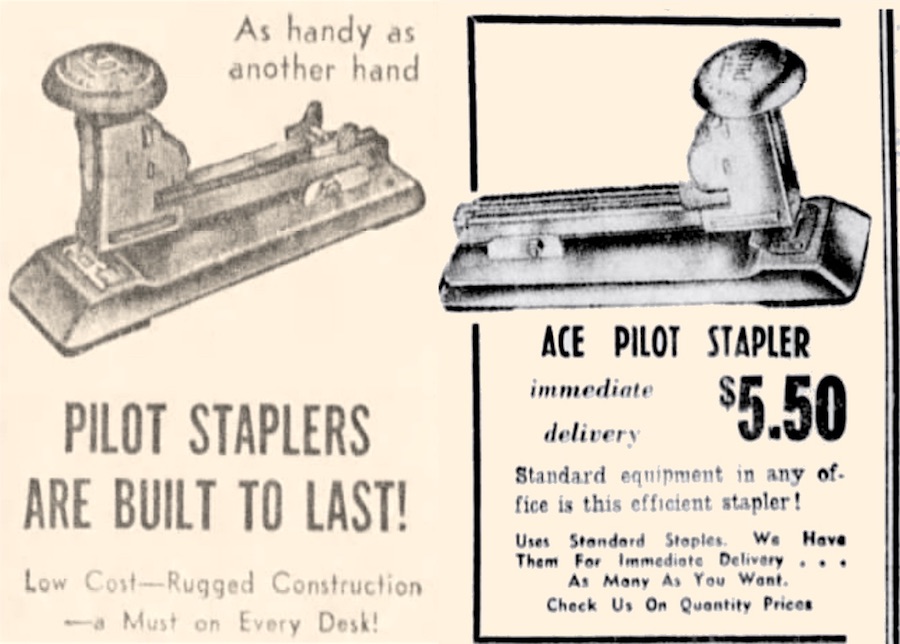 “Love the article on Ace Fastener Corp. I happened upon it while checking out if my still working Ace Liner Model 502 was in any way the oldest of that model still in use. I have it since 12th Sept 1977 the day I started work with a large construction company in Dublin (no, not Ohio) Ireland. Both myself and the Ace Liner are still working for that same construction company 41 and a bit years later. We’re still faithful to each other after all these years.