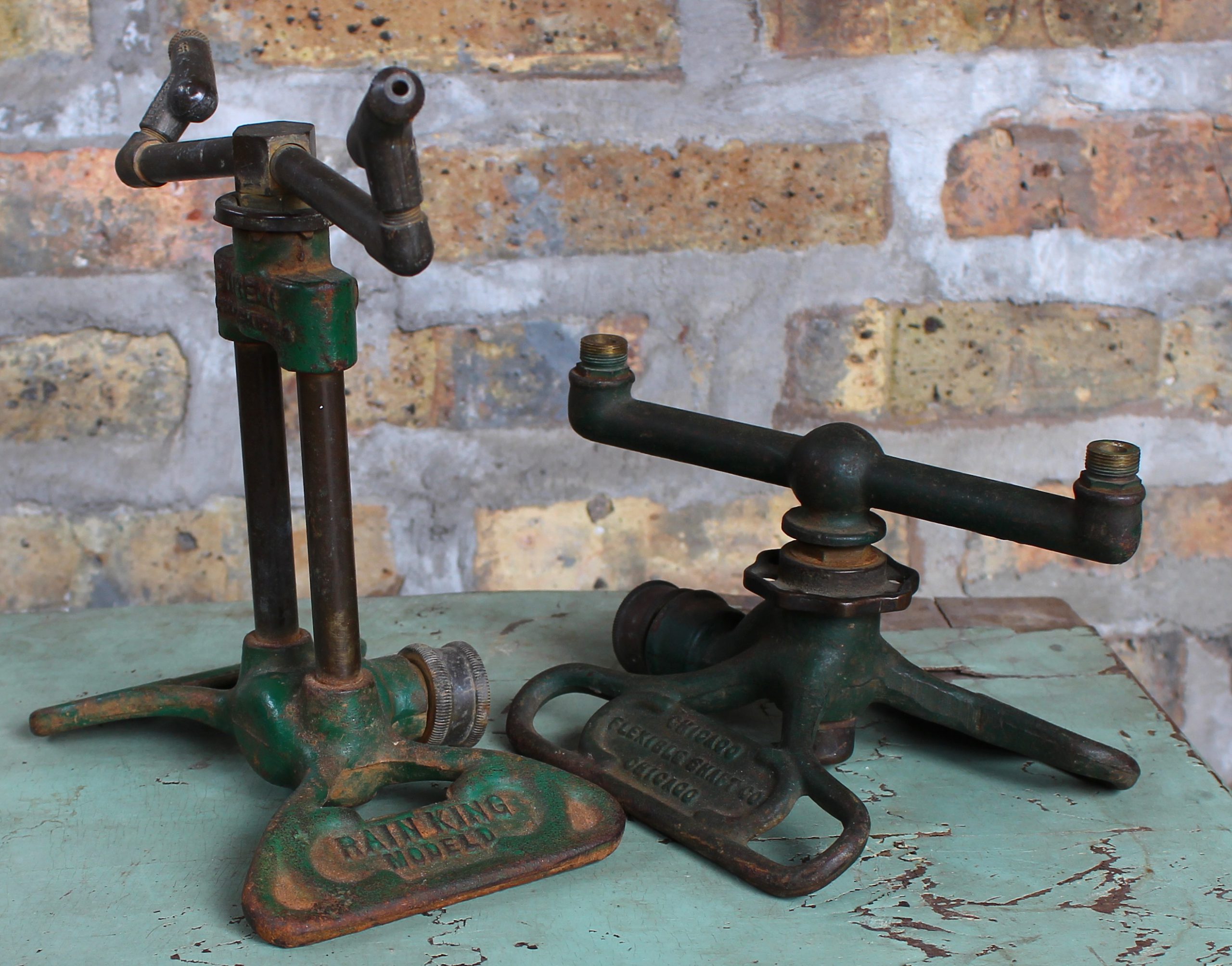 Here we have a pair of “Rain King” lawn sprinklers that help represent the transition of the Chicago Flexible Shaft Company from a noted manufacturer of farm equipment into one of the leading home appliance powerhouses in the world, the Sunbeam Corporation. 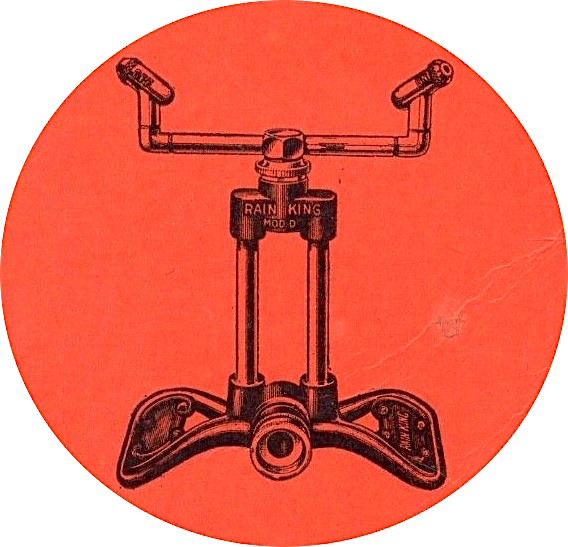 To get the full background on the company’s early days as the worldwide leader in horse clippers and sheep shearers, you can check out our main Chicago Flexible Shaft Co. page. Or, if you’re just here for the sprinkler lowdown, I will try to cover the basics below

The shorter of the two sprinklers in our collection has a 1925 patent date and includes only the “Chicago Flexible Shaft Co.” manufacturer name. Its taller cousin, the Rain King Model D, is a later model, and displays “Sunbeam” as the official manufacturer.

For over 30 years, Sunbeam had merely been one of the product lines of the Chicago Flexible Shaft Co., specifically covering its growing line of electrical appliances. Powered by the inventive spirit of chief engineer Ivar Jepson, however, the Sunbeam brand soon eclipsed the fame of its parent company, as Americans scooped up Jepson’s electric “Mixmaster” food processor and other affordable but quality-made products: electric razors, waffle irons, and backyard sprinklers among them.

Technically, the “Rain King” line had been established shortly before Jepson’s 1925 arrival at the Chicago Flexible Shaft Co., with the earliest incarnation going into production in 1922. The original patent belonged to a Chicago inventor named Mr. Finis E. Roach, whose previous work mostly involved designs for dental appliances. Roach’s breakthrough was essentially the introduction of greater customization element to the lawn sprinkler, creating a device he described as “so constructed that it may be readily adjusted to meet the peculiar watering requirements of any portion of a lawn, parkway, flower bed, or the like.”

Taking over the project, Ivar Jepson gradually added his own innovative tweaks, rolling out the first “Model D” Rain King design in the early 1930s. It included patented brass nozzles that could “throw more water than other sprinklers on same pressure and spread it more evenly,” according to promotional materials. It was the “simplest of all sprinkler nozzles to set,” and could “regulate the fineness of the spray, direction of discharge, and turning speed and size of area watered.”

An instructional guide provided with the Model D laid out a user’s options, which you can utilize below if you (a) want to use a Depression-era sprinkler for some reason, and (b) can understand these directions:

High Speed, Small Circle
With the nozzles set at right angles to the revolving arms, as in the picture, the sprinkler will revolve at high speed and distribute water over a small circle.

Low Speed, Large Circle
This picture shows the proper setting of the nozzles for turning at slow speed. After setting the nozzles as shown, if arms to do not revolve, turn nozzles back until arms revolve.

The Model D Rain King sold for around $1.50 in the early 1930s, and upwards of $7 in the years after World War II, when the Chicago Flexible Shaft Co. officially became the Sunbeam Corp. The handy little device was marketed not only to everyday citizens for their back gardens, but to owners of larger estates and golf courses, who were encouraged to line up a cavalry of these weather-proof metal sprinklers in the days before more advanced, coordinated systems were widely available. 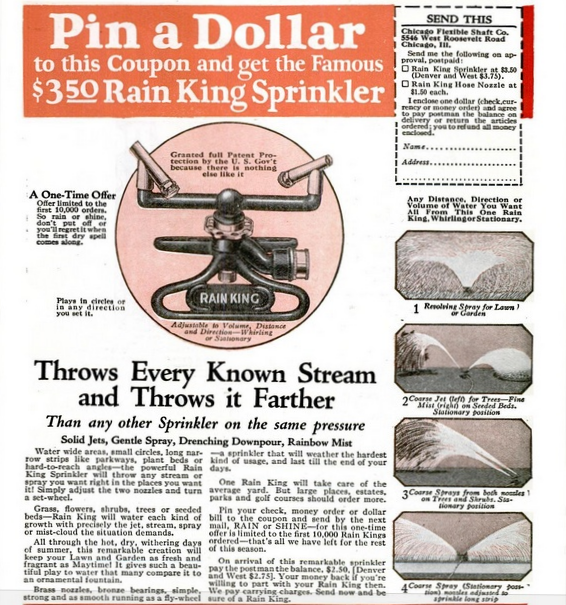 [1927 advertisement for an early version of the Rain King]

Functionality aside, the Rain Kings were also widely touted for the aesthetic appeal of the water sprays they produced, as noted in the ad for Finis Roach’s original design above.

“All through the hot, dry, withering days of summer, this remarkable creation will keep your Lawn and Garden as fresh and fragrant as Maytime! It gives such a beautiful play to water that many compare it to an ornamental fountain.”

That 1927 advertisement lists the original, pre-Depression Rain King at a $3.50 price tag, which is equivalent to about $50 after inflation. Sounds fairly reasonable, but it was still four times the cost of most traditional sprinklers on the market at the time. Rather than just shipping the product off to hardware stores then, the Chicago Flexible Shaft Co. was largely dependent on independent “jobbers” and door-to-door salesmen to convince the public that the superiority of the product warranted the extra expenditure. For that to happen, though, the company would first need to convince hundreds of salesmen that the Rain King was a product worthy of their own time in the first place.

For that task, Chicago Flexible Shaft turned to its clever marketing rep C. R. Sweney, who launched an unorthodox campaign in the trade magazines in 1922, when the company first started making the Rain King. His goal was to inundate would-be jobbers with personalized, often humorous direct mail pieces to grab their attention. Sometimes it would be specific material about the brand new Rain King, and other times it’d be a strategic pandering ploy—like the cartoon strip on this page, showing a salesman’s catalog growing larger with each frame, culminating in a happy night’s sleep in a hotel with visions of the Rain King sprinkler dancing in his head. Sweney even went out on the road with some salesmen for several weeks to get a sense of what they wanted to hear. He described his strategy in a 1922 issue of Sales Management titled, “When You Want Distribution in a Hurry.”

“After my trip I decided that all we could hope to do was to keep the salesmen from forgetting our product,” Sweney said. “Everybody else was competing for the jobbers’ salesmen’s attention. Hence, in planning the campaign I deliberately refrained from telling too much about ‘Rain King’ sprinklers. All I wanted to do was to have the jobbers’ salesmen say to themselves, ‘Well this fellow at the Chicago Flexible Shaft Company is a pretty good scout—maybe these ‘Rain King’ sprinklers are worth pushing. I’ll try one on this trip, anyway.”

The efforts worked, and the Rain King did start selling in good numbers. A year later, hardware dealers started carrying and advertising the product, as well, sometimes hailing it as “The Sprinkler with Brains!” The Rain King brand was well on its way to becoming one of the leading sprinkler systems of the next several decades, and perhaps more importantly, it was one of the first Chicago Flexible Shaft products to achieve widescale success with the general public, rather than the company’s usual agricultural clientele. The stage was set for the company’s evolution into a new entity for post-Depression, post-war success. 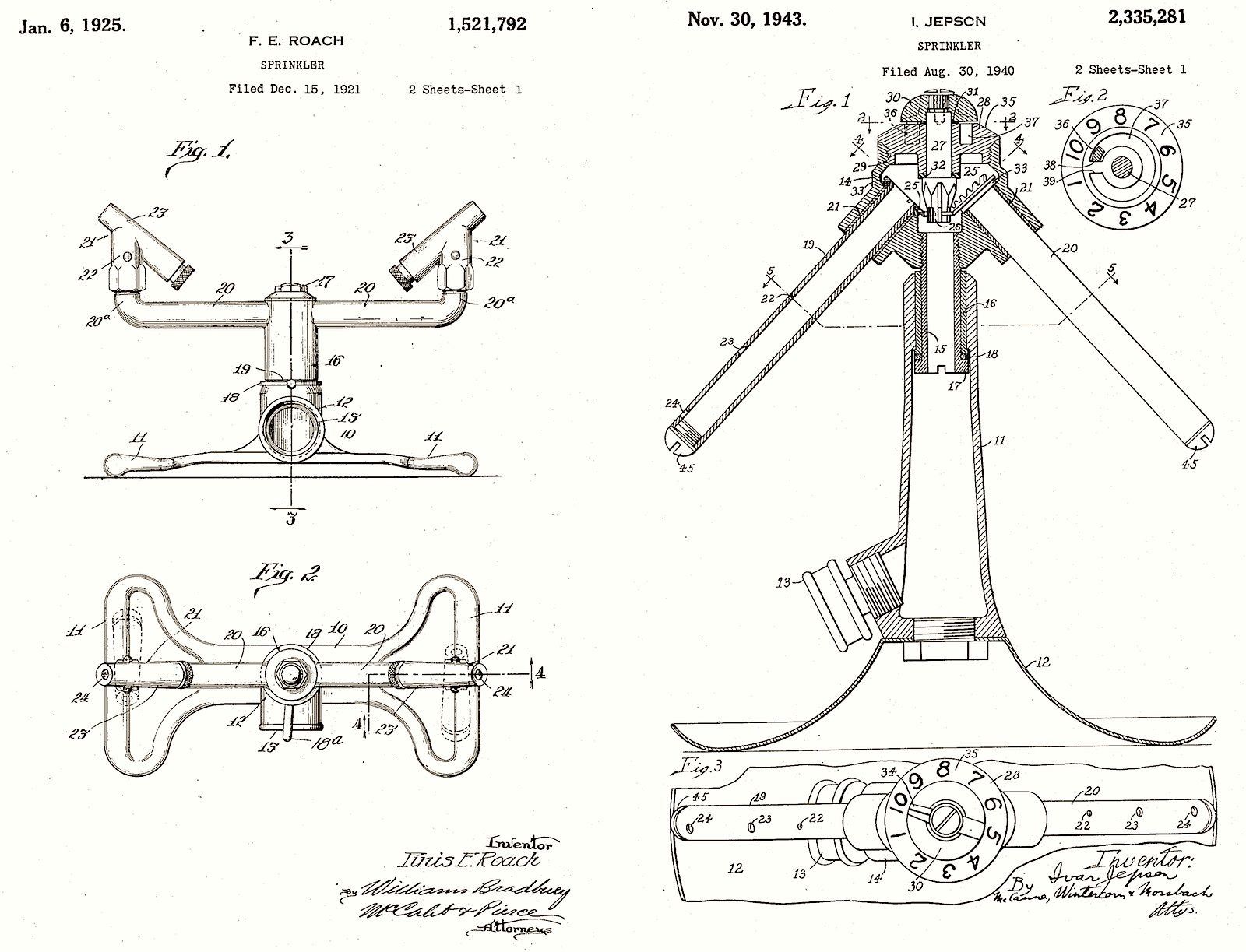 As noted, much of the credit for the Rain King’s long-term success should go to the company’s resident Swedish genius, Ivar Jepson, who never seemed content to stop experimenting with design improvements. Under his watch, a whole series of new sprinkler designs were rolled out under the Chicago Flexible Shaft and Sunbeam banners, providing a growing array of adjustable settings and spray capabilities.

Jepson was a undeniably an “inventor,” and had piles of patents to prove it. But his real responsibility at Sunbeam, and his greatest skill, was basically as a tweak-smith—a recognizer of what worked and didn’t work in products that already existed. In a 1958 company newsletter, Jepson basically explained as much in his description of the R&D department he’d help lead for 30 years: “At Sunbeam, Research and Development performs twin functions: a) to discover and develop new products, and b) to improve the appearance, design and function of existing products, and adapt them to ever-changing consumer needs and preferences.”

Hence, a good sprinkler became a must-have sprinkler. Sprinkler royalty, you might say.

Jepson retired in 1963 and died in 1965. Sunbeam remained at its longtime 5600 Roosevelt Rd. location until the early 1980s, when the company was purchased by Pittsburgh’s Allegheny International Inc. and the Chicago operations folded. Today, Sunbeam is a subsidiary of the Jarden Corporation and has its headquarters in Boca Raton, Florida. 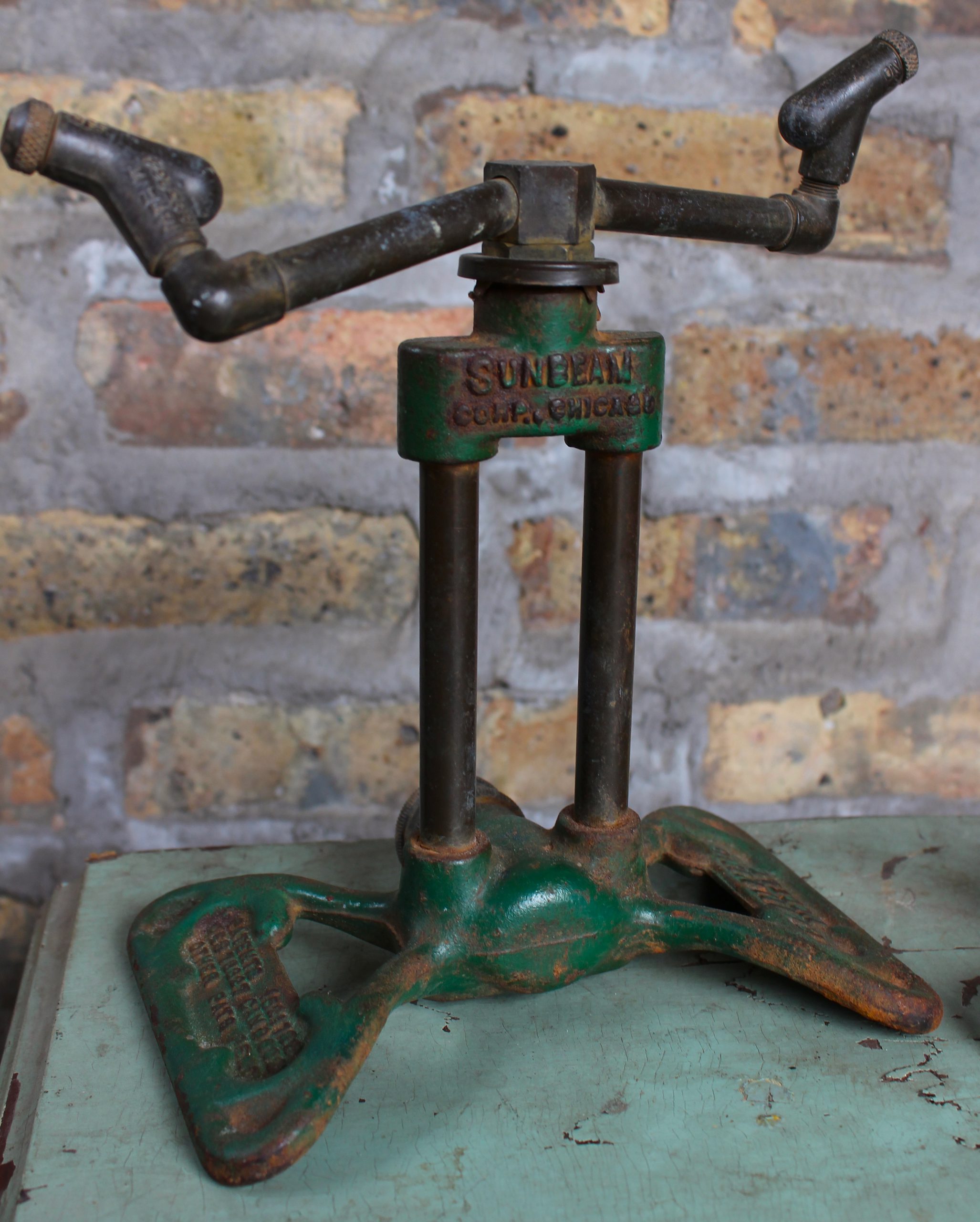 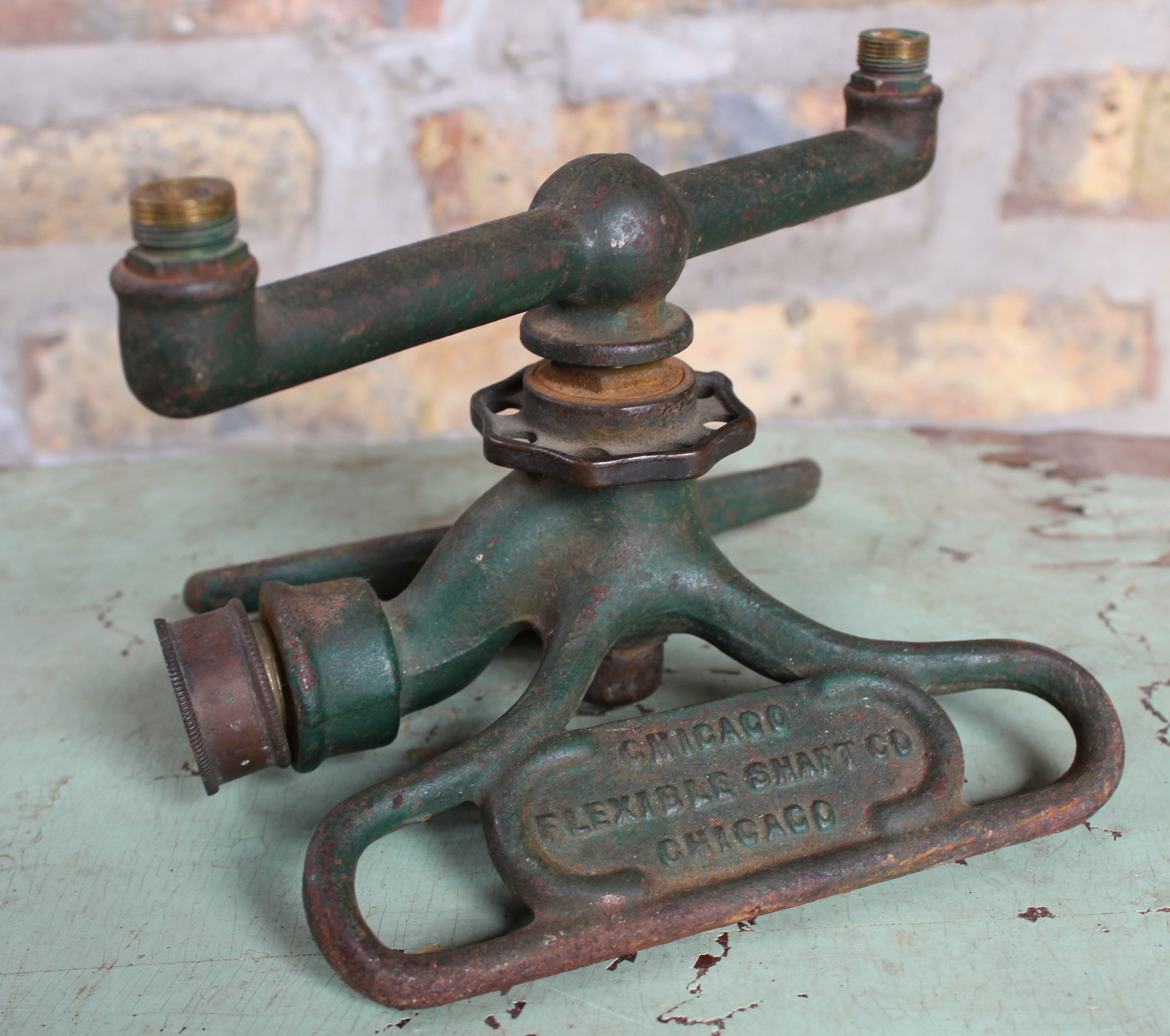 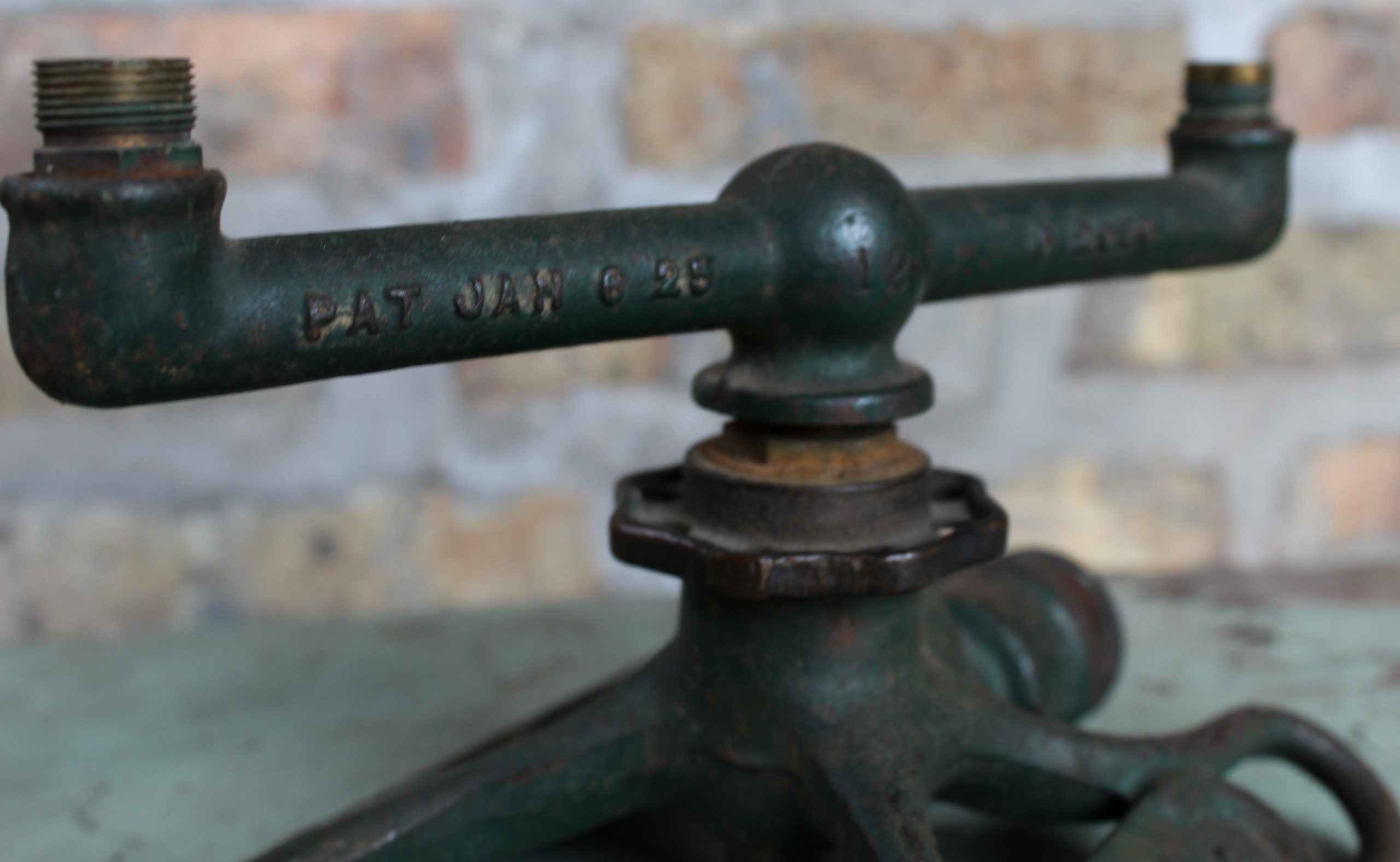 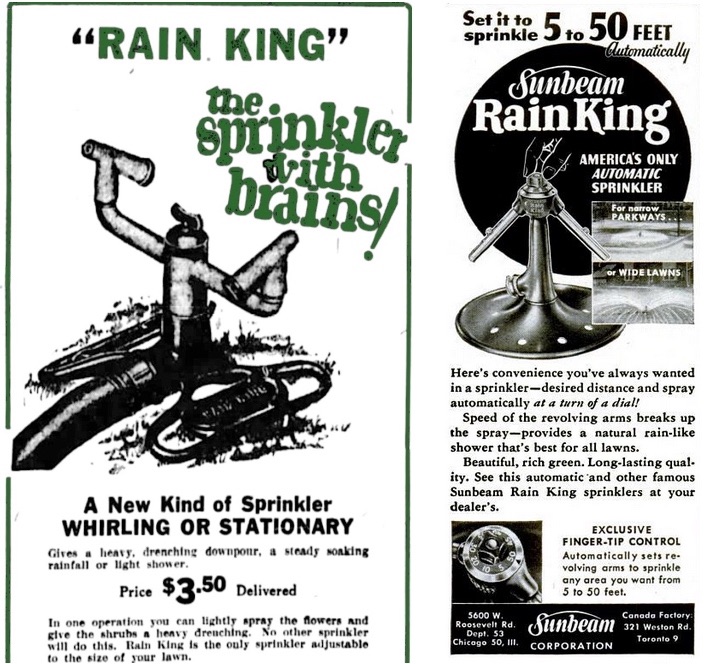 “My grandfather, Edwin J. Gallagher, won a contest to re-name the company with his entry of “Sunbeam”.  He won $1000, which was quite a bit of money at the time!” —Beth Gallagher Chipchak, 2020

“My father “Whitey” Schmidt started working at Sunbeam right after he got back from WWII. He worked there up until his retirement in 1980…

“Looks like they have torn down the building that made the lawn sprinklers because when I look at the buildings on Google maps, the only one on Roosevelt Road that is old is the one stop liquor store. ” —Randy the Wild Horse

“Yes, while the original location is marked on our “Lost Factory Map,” the building itself is long gone.” —Made in Chicago Museum

“I just bought  my second one. will hook it up in tandem or use one  on each lawn. BETTER THAN THE CHEAP PLASTIC CRAP OUT THERE!!” —Jim, 2018

“My Grandfather worked for Chicago Flexible Shaft-Sunbeam for over 50 yrs. He retired around 1954. He worked in the R&D Dept. and Ivar Jepson was his boss. I inherited my skills as a machinist from my Grandfather.  When ever I see a old Sunbeam product brings a smile to my face and I get a feeling I once worked to help developed that product.