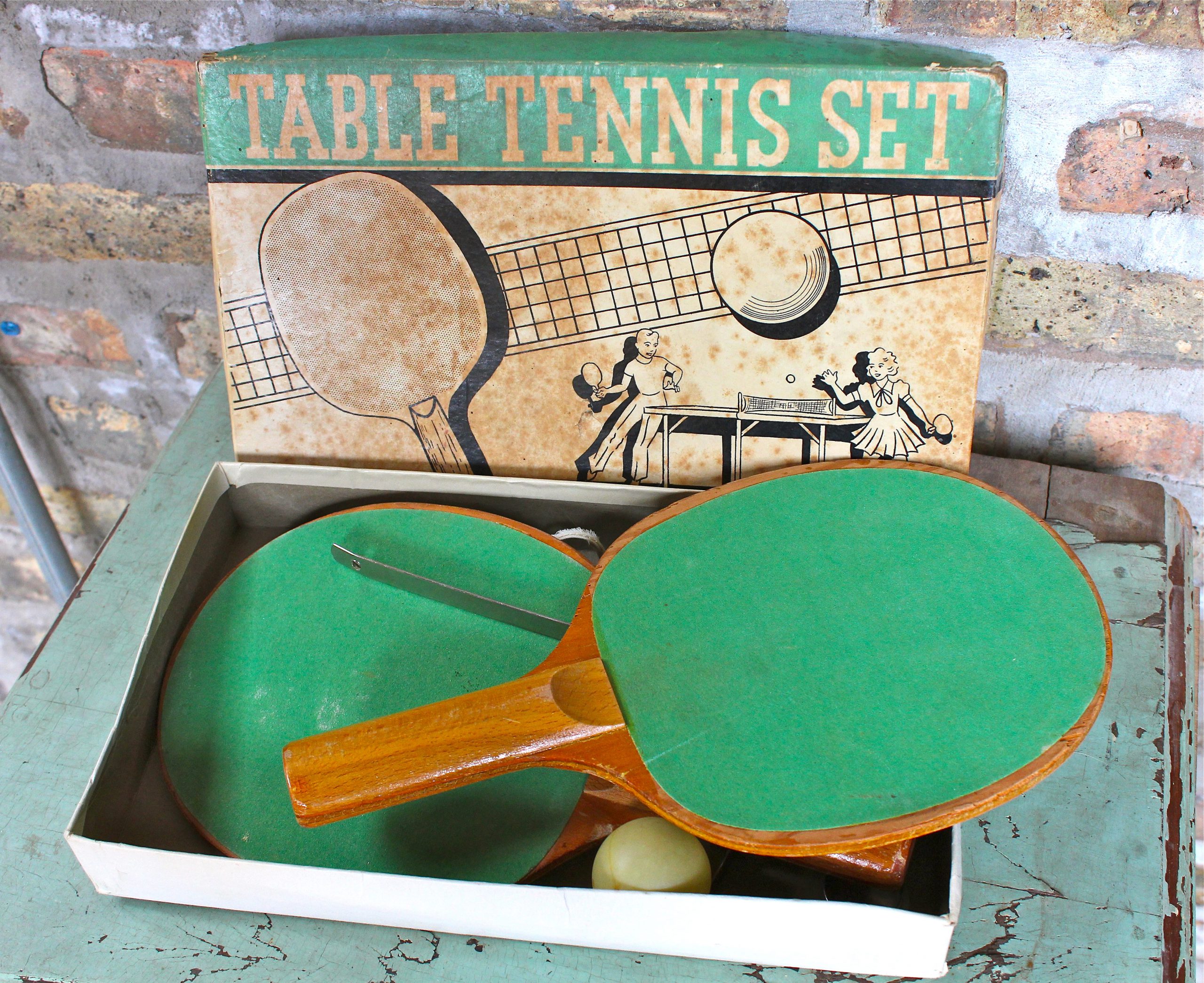 While ping pong is perhaps most simply described as a miniaturized, parlor room version of tennis, I prefer to look at tennis as an inefficiently over-sized adaptation of ping pong. Beyond being the greatest test of hand-eye coordination (and cunning) yet devised by mankind, table tennis also trumps so-called “real” tennis in that its technology is relatively unchanged in the past 60 years—as the vintage pong set in our collection clearly shows. 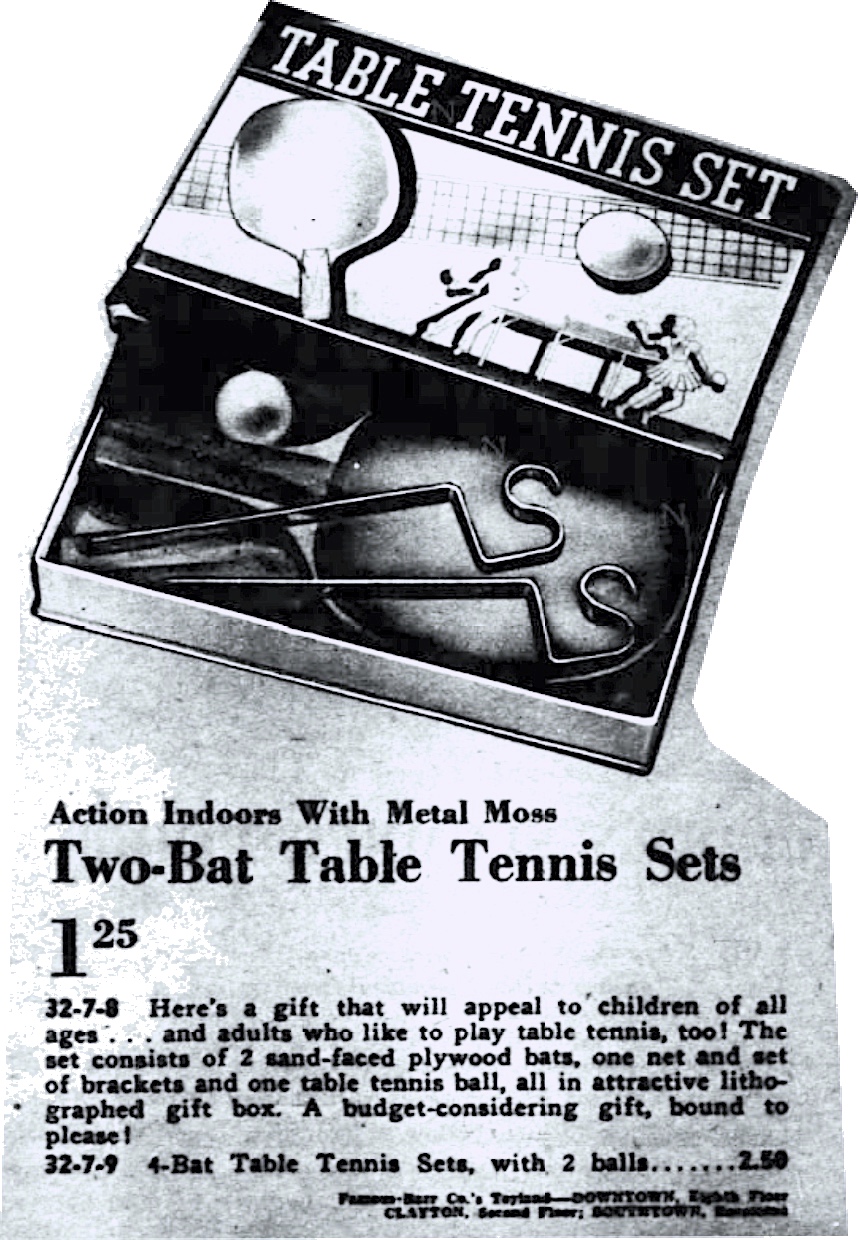 If you decided to bring an old wooden tennis racket to the country club these days, you might get laughed off the lawn by the jerks with their super graphite turbo-smashers. By contrast, if you stayed home and played DIY ping pong instead, a starter kit from the 1950s will serve you just as well as one from the 21st century. The cost of this “toy,” as noted by the 1954 newspaper ad included here, was just $1.25 . . . “a budget-considering gift, bound to please!”

Today’s children’s ping pong sets offer all the same components as the mid-century model—one stretchy clamp-on net that usually leans wonkily in one direction; flimsy wood paddles with some glued-on green rubber padding; and a couple ivory-colored plastic balls that will probably crack the first time you slam them.

The only thing NOT included in our vintage pong set, or any similar kit since, is the actual playing surface, aka “the table.” The idea is to hook up the net to your kitchen island or something. But it’s also fair to say we’ve all played a game or two of “floor ping pong” when the circumstances demanded it, and it was still fun as hell.

[Both of the designs above were used as packaging for Metal Moss table tennis sets in the ’50s, along with the comparatively dull one from our collection, seen at the top of the page]

Anyway, all this silly chatter is admittedly a bit of a ploy to distract you from the fact that I know fairly little about the maker of our table tennis set, the Metal Moss Manufacturing Company. But like a determined ping pong champion, I will keep this rally going.

Metal Moss was founded, as best I can tell, around 1937, by a pair of young Jewish go-getters named Arnold P. Natenberg [pictured] and Edward Metz. For a long time, I helplessly pondered what the origin of the company’s name might have been—an obscure historical reference? A subtle play on Ed Metz’s name? But no. As it turns out, the Metal Moss MFG Co. started out as a producer of knitted metal sponges and scouring pads—both for industrial use and for cleaning the grease off your average pots and pans. Quite literally, these clumpy stainless steel scrubbers looked like, well, “metal moss.” Well done.

The Metal Moss factory was located on the South Side at Michigan and 22nd, a building that’s still standing today. . . barely (it’s empty rooms are presumably haunted by the eerie sound of bouncing ping pong balls). Over time, Natenberg and Metz would run three loosely affiliated but technically separate companies from this same facility. There was Metal Moss, which quickly transitioned away from sponges into more entertainment related fields; the Kurly Kate Corporation, a popular style of the original metal sponges that became its own entity; and the Edwards Manufacturing Company, which made fishing equipment and other sporting goods.

During World War II, when the “metal” in Metal Moss was at a premium, the company rolled out a new cleaner called a “Clean-Up Giant Magic Scouring Pad.” It was made from a mysterious material shipped in from Tampico, Mexico, containing cactus root and who knows what else. “It cleans and polishes pans satisfactorily,” one newspaper claimed, “and cannot rust or get under the fingernails like metal pads.” Around the same time, Metal Moss also debuted a scrubber made from cloth mesh and a patented plastic emulsion. Innovation appeared to be a strong suit.

In 1954, the year our table tennis set was likely produced, Metal Moss employed about 50 people. Arnold Natenberg died that same year at the age of just 49, but the business carried on, with the workforce at 2215 S. Michigan doubling to 100 by the early 1960s. By that point, Edward Metz Jr. was serving as Vice President alongside George Frehling (President – Sales), Arthur J. Baldauf (VP – Purchasing), and Richard Kahn (Secretary-Treasurer). This was likely the peak era of the business, as most references to Metal Moss putter out by the end of the decade.

The “Kurly Kate” brand is actually still around today, under the ownership of the Dial Corporation. But if there’s a truly noteworthy legacy for the long since defunct Metal Moss MFG Co., it has to be its head-scratching commercial partnership with one of the most recognizable franchises in American pop culture. 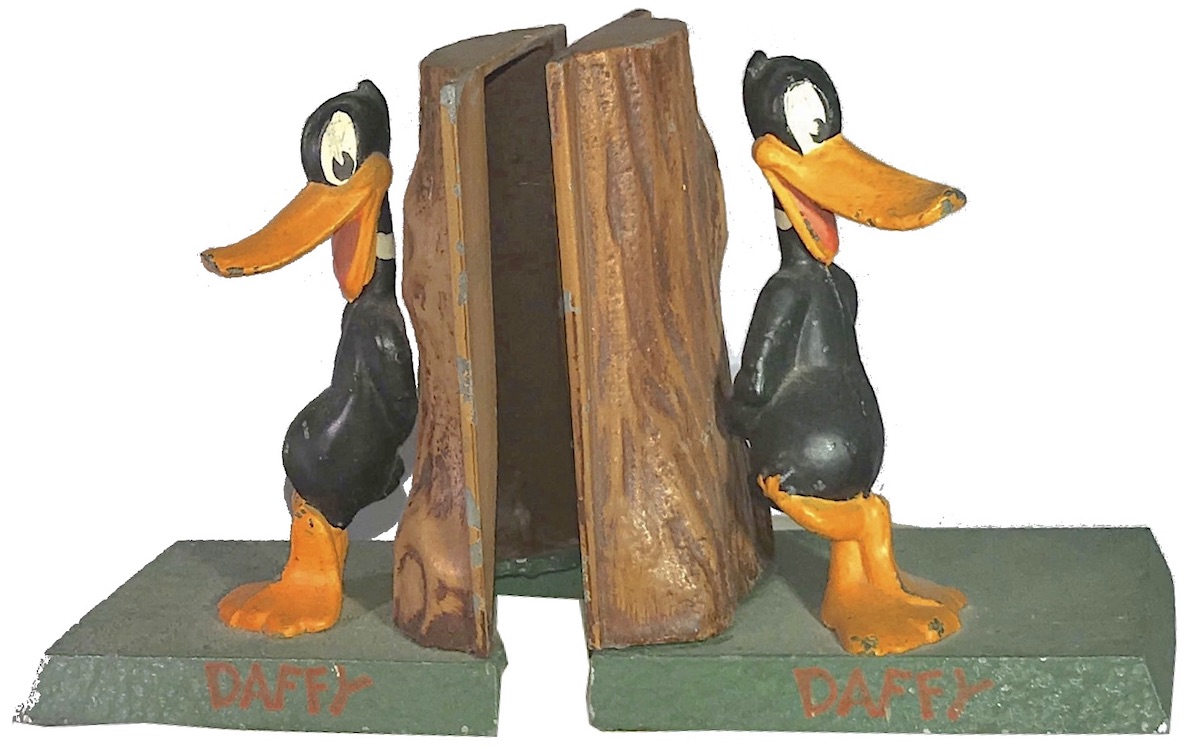 I have yet to find any sound information on the actual origin of this relationship, but from the late 1930s into the 1950s, Metal Moss manufactured several officially licensed “Looney Tunes” and “Merry Melodies” products for the mighty Warner Brothers Studios. It started with a series of painted metal Daffy Duck, Porky Pig, and Bugs Bunny coin banks, and later led to a board game of sorts called a Cartoon-O-Graph, which guided kids in how to draw their favorite Looney Tunes characters using a scary looking tracing contraption. The Cartoon-O-Graph was joined by Metal Moss’ similarly minded “Farm-O-Craft” and “Mobile-O-Craft,” which involved making molds rather than doodles. The Cartoon-O-Graph ad below ran in a 1954 issue of LIFE Magazine. 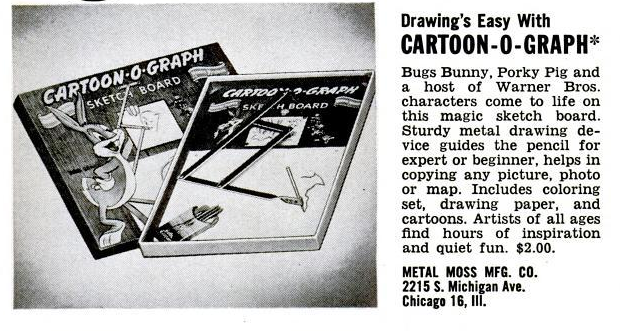 So, to review then, Metal Moss knocked it out of the park with industrial scrubbers, went next level with table tennis sets, and somehow topped it all off with an in-his-prime Bugs Bunny in their corner, to boot. With all this going for them, you’d think information about Natenberg and Metz would be widely available. The Looney Tunes tie-in, in particular, would seem to have warranted some sort of deeper investigation over the 70 odd years since. But alas, the whole things remains a bit of a mystery.

If you can fill in any of the gaps on this unusual tale, please let me know in the comments or via email. 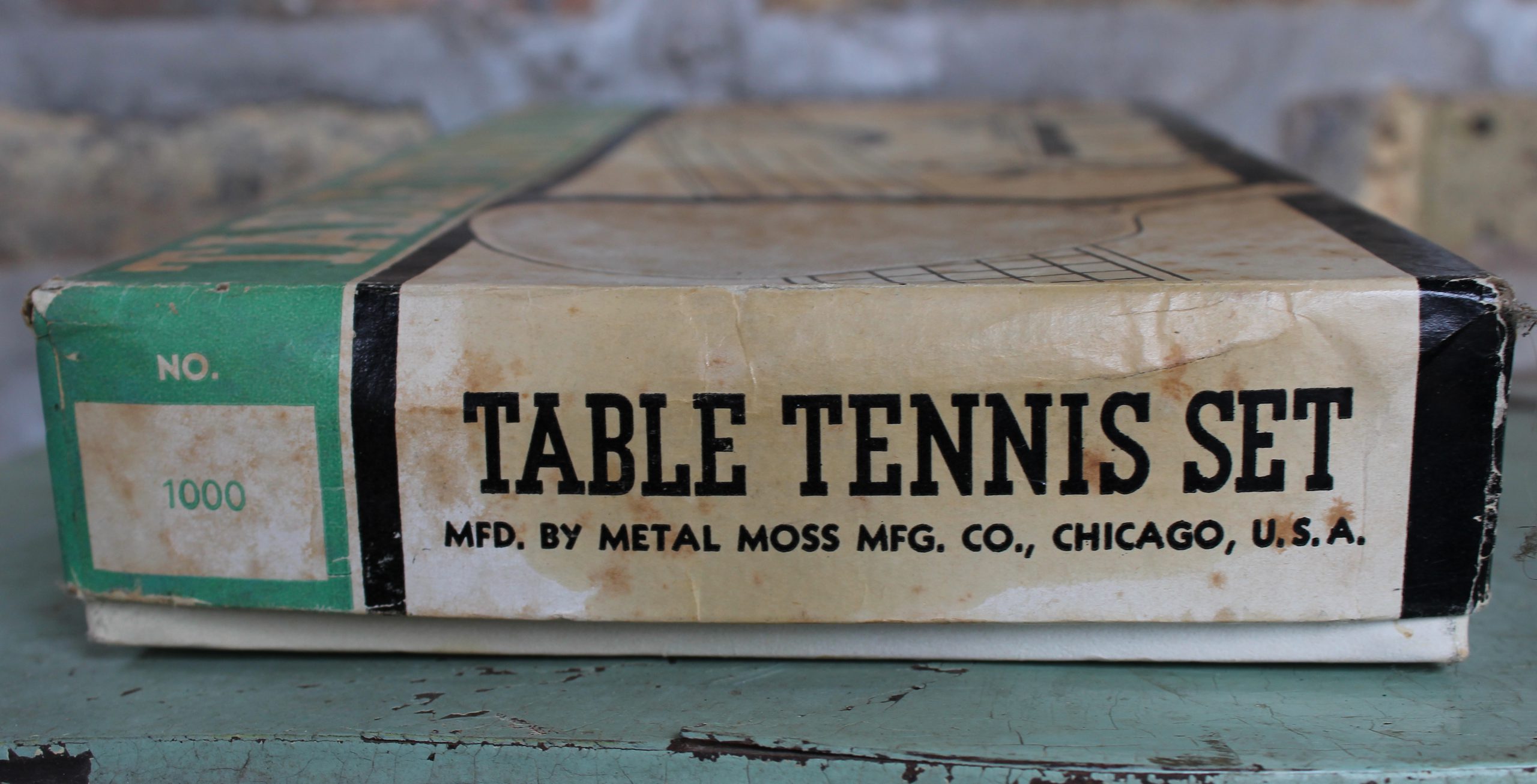 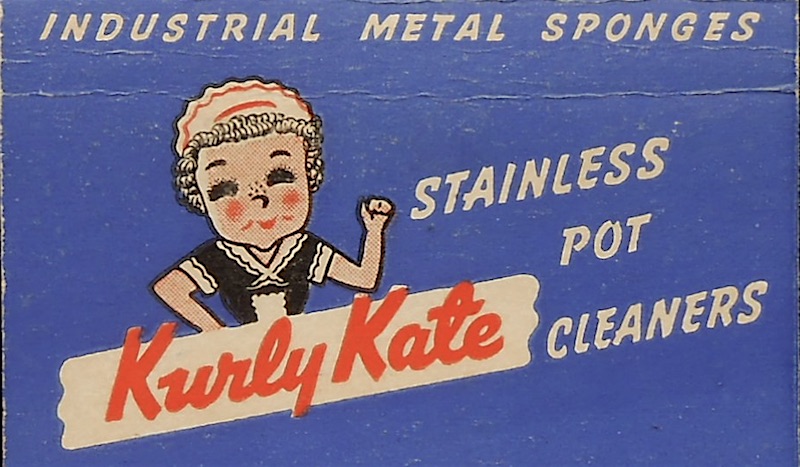