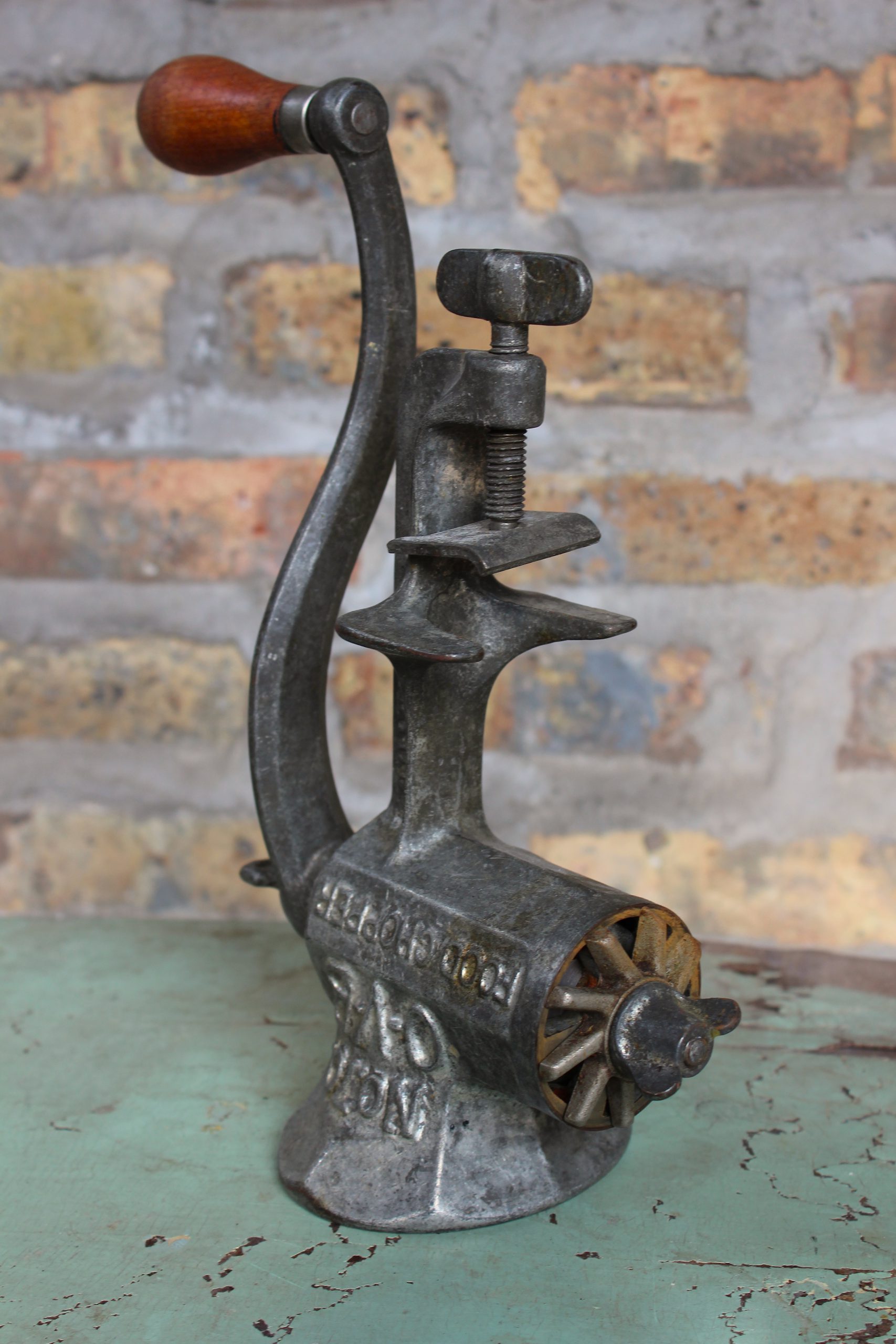 The Made-in-Chicago Museum has a couple different relics from the warehouses of Hibbard, Spencer, Bartlett & Co.—the hardware dealer that became one of the country’s wholesale giants for the better part of a century. You can read the full company history over on our main Hibbard, Spencer & Bartlett page (which features an old Hibbard railroad lantern), or you can stick around here to learn about this peculiar item. As Arnold Schwarzenegger would say, let’s “get to the chopper!” 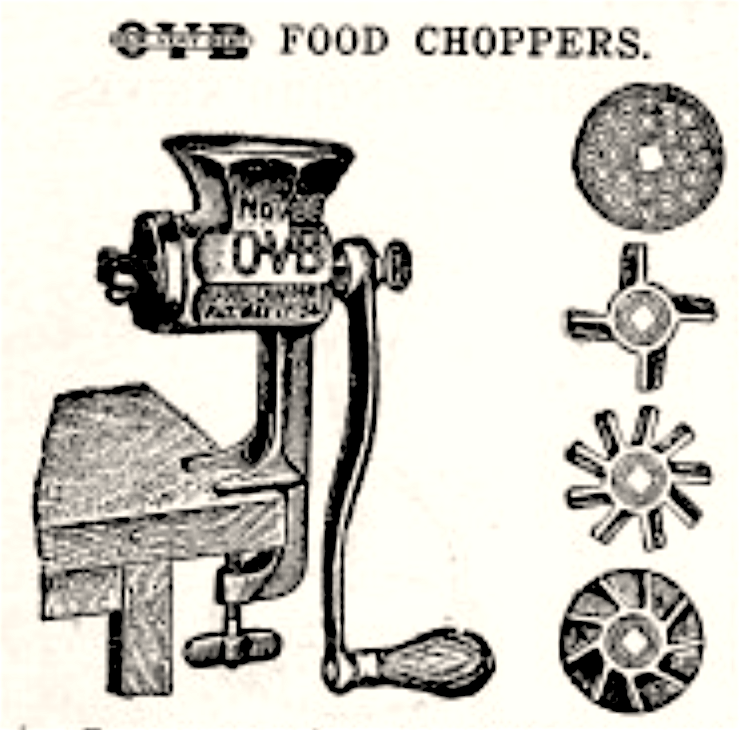 This particular O-V-B (“Our Very Best”) No. 70 Food Chopper was advertised to merchants in the 1916 Hibbard, Spencer, & Bartlett catalog for a price of $18 for a dozen, or a buck-fifty per chopper. A full 100 years later, I paid a whopping five dollars for one at an Uptown garage sale. Sounds like a rip-off, but since $1.50 in 1916 is about $33 with inflation, I’m going to call myself a clever bargain hunter.

Only trouble with this pristine tool, I later came to realize, is that it’s lacking just about all the attachments I’d need to, you know, chop food successfully with it. Here’s how a 1911 article in Good Housekeeping described the proper use of a fully operational O-V-B Food Chopper. Put your seat belts on, cuz it’s thrilling:

“This chopper consists of a hopper and cylinder with frame by which it is screwed to the table, cast in one piece [the No. 70 rises about 5″ off the table-top after its set-up, if you need a sense of scale, which I usually fail to provide]. In the cylinder, which is grooved spirally, fits a spiral feeder, the end of which projects beyond the spider frame of the end of the cylinder. The edges of this frame are sharpened, and against it are screwed, on the projecting end of the cylinder, the different-sized cutters. The chopper is turned by a crank handle attached to the other end of the cylinder by a screw. The four cutters are designed for coarse, medium, and fine chopping, the fourth being used for grinding nuts for butter or mashing any material extremely fine. The hopper feeds directly on to the spiral feeder and the cutters are self-sharpening. Made by Hibbard, Spencer & Bartlett, State Street Bridge, Chicago, Ill.” 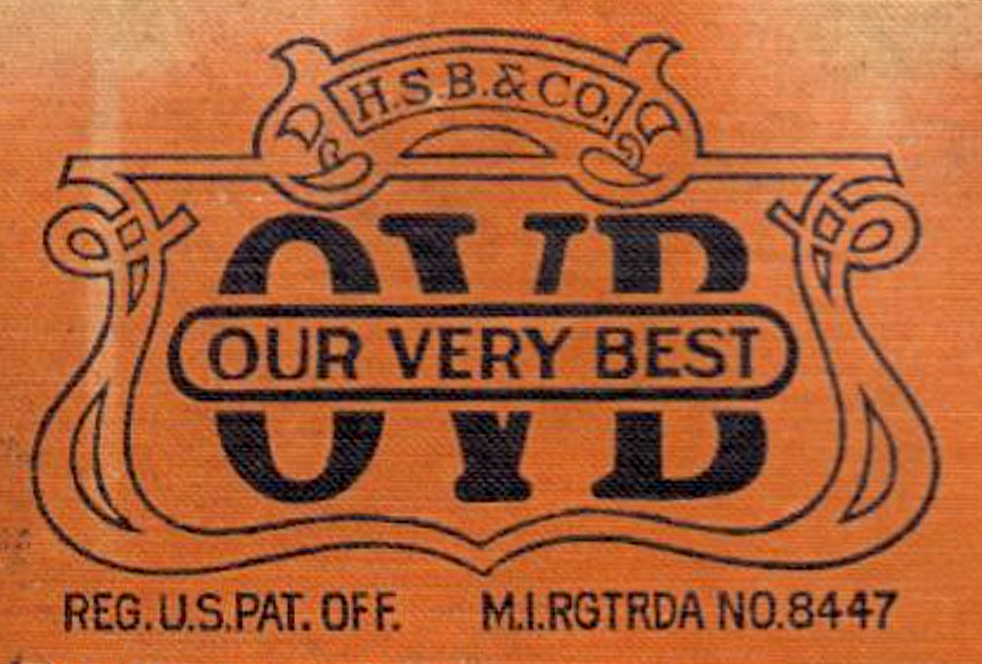 Being a distributor more so than a manufacturer, it’s probably only semi-accurate to say HSB&Co “made” this chopper, although the Hibbard brand name “Revonoc” was also attached to it. Still, a third party likely handled the initial labor; one guess being the Griswold MFG Co. of Erie, PA, but there are some other possibilities. 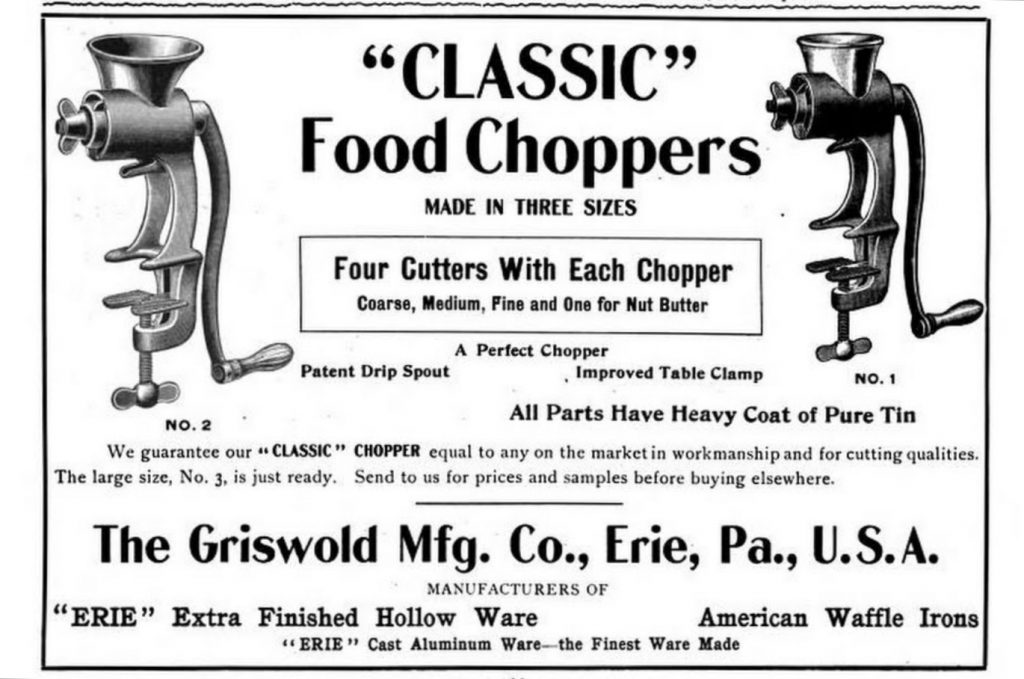 In any case, according to the 1916 Hibbard catalog’s own language, the O-V-B Chopper “does not mash or squeeze, but chops into clean cut, uniform pieces, all kinds of meat, raw or cooked, also vegetables and fruits, fine or coarse as wanted.” 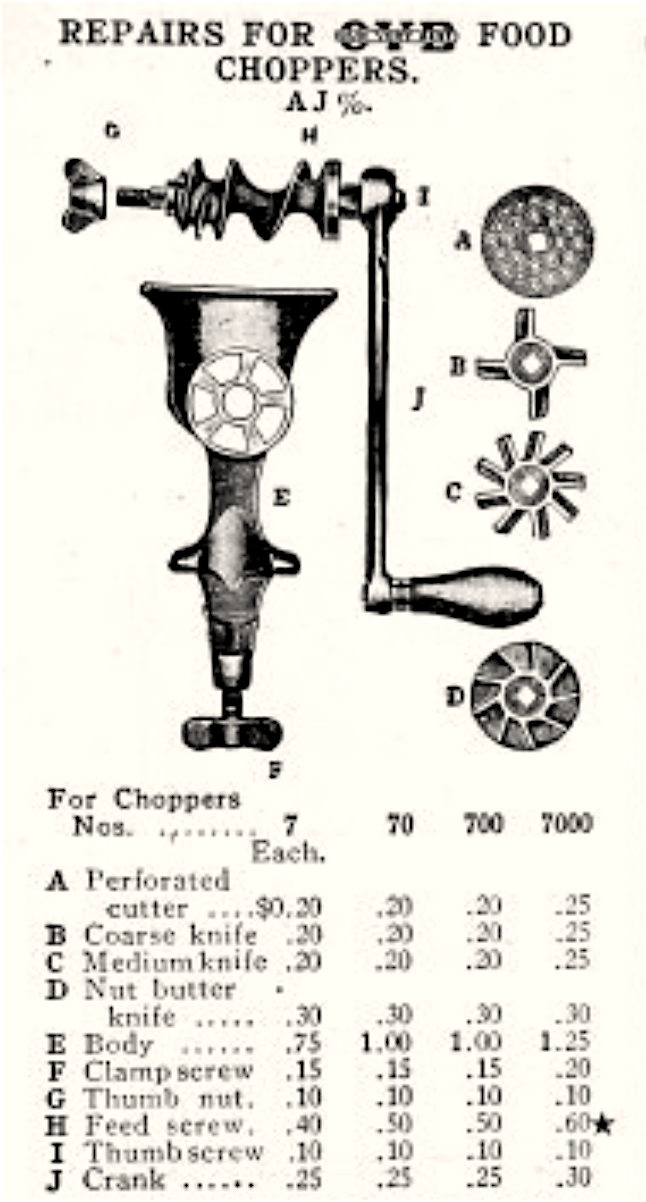 “IMPROVED Revonoc CHOPPERS embrace all the GOOD features of the choppers sold all over the United States for so many years, and THESE NEW IMPROVEMENTS: The underside of the top part of clamp has been made smooth, so that it may be used on any table without marring the finish. One the thumb screw a plate of special design is fitted, providing a clamp which holds firmly and securely. The wood handle has been changed to a rich mahogany finish.”

It sounds like a pretty great, all-purpose, slicin’ and dicin’ machine, so it’s no surprise that it was a big seller for HSB&Co for quite a few years. Unlike future electrical choppers and blenders, it was also probably a tad less likely to mangle your own extremities while using it, so that was a nice extra bonus.

Again, I also went to the trouble of writing a delightful company history of Hibbard, Spencer, Bartlett & Co., so you might as read that while you’re visiting. 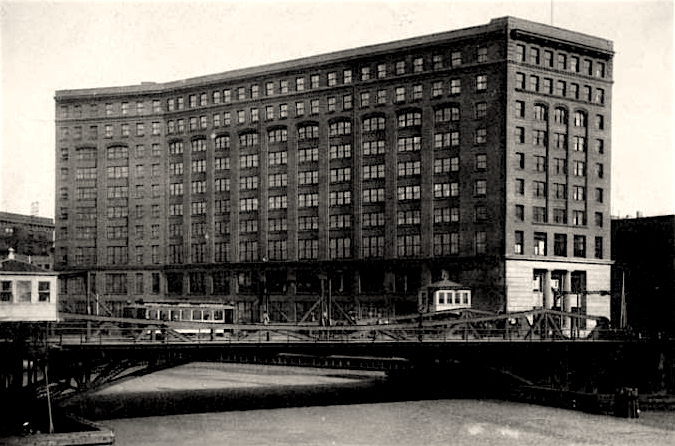 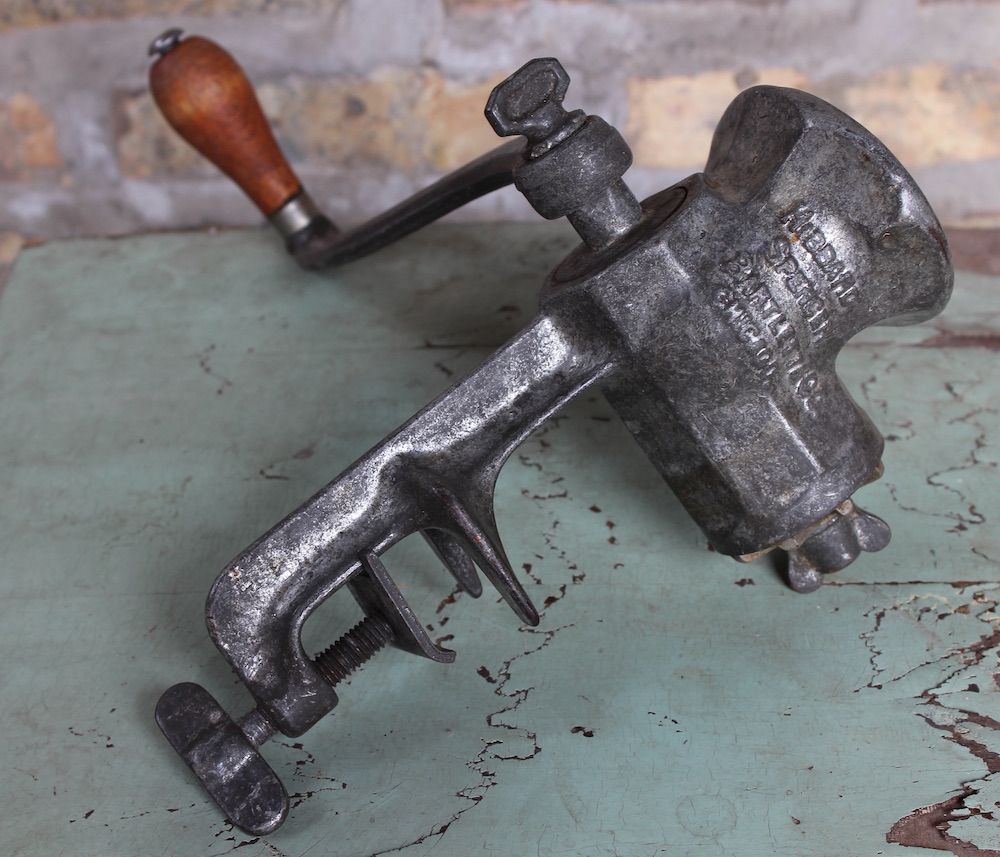 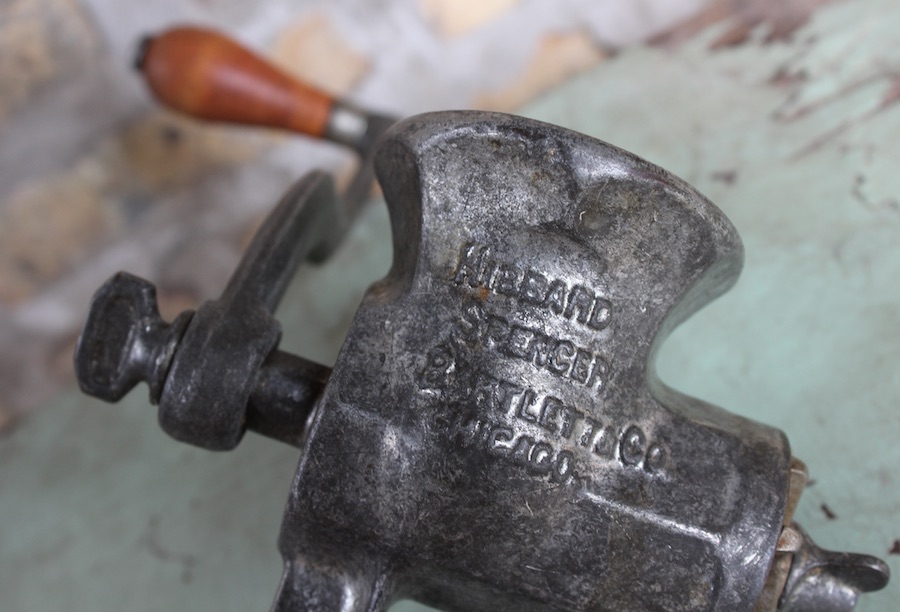 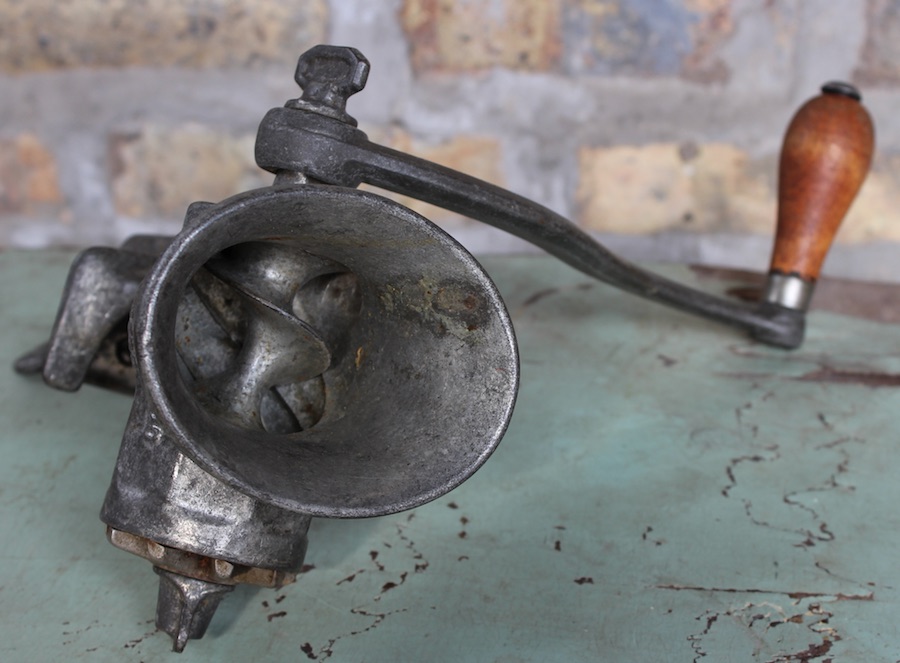 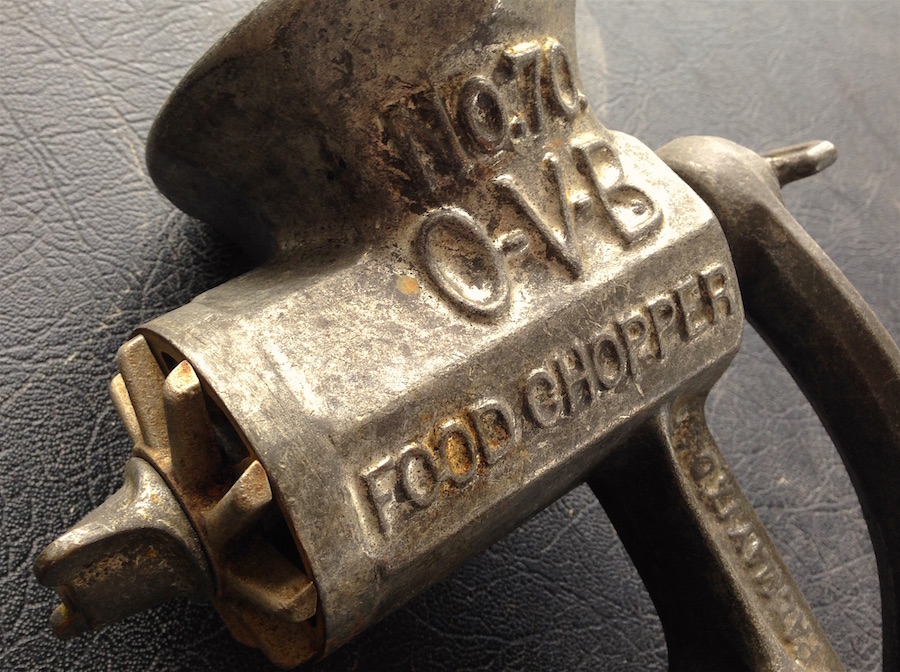 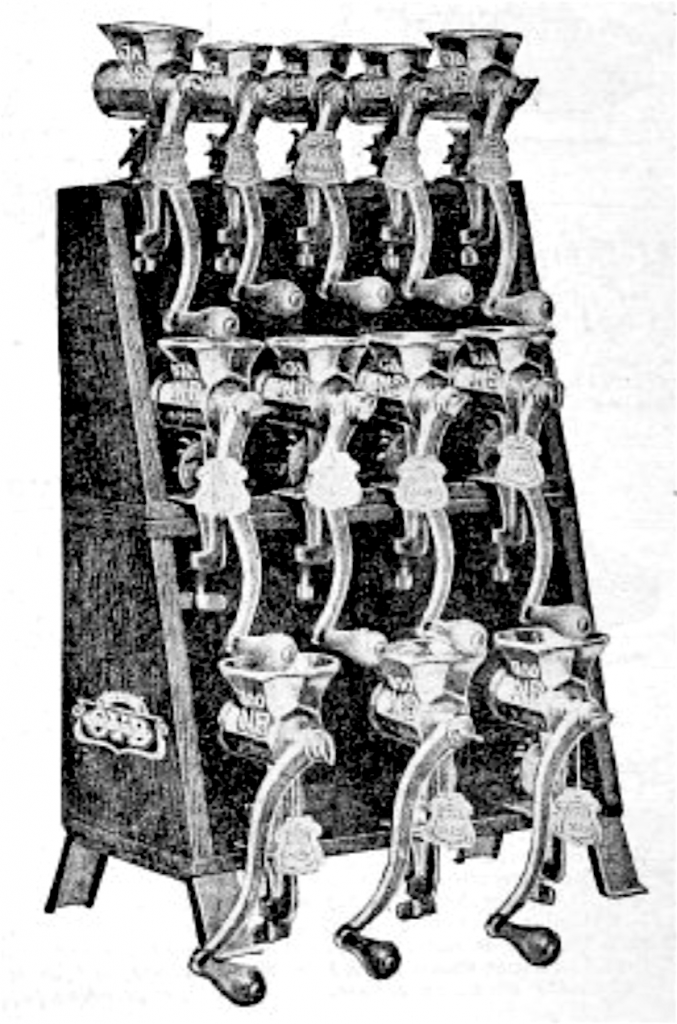 “I just bought mine at a local (very rural -UP Michigan) rummage sale this summer for $4- with what appears to be all the parts except the outside screw…which ironically I lost in my 1970 Universal one from my great-grandmother (a wedding present, bless her sweet THOUGHTFUL-FORSIGHTFUL heart) 🙂 I am so blest to be around regions that older people kept their histories-for the most part- intact.” —Linda, 2018