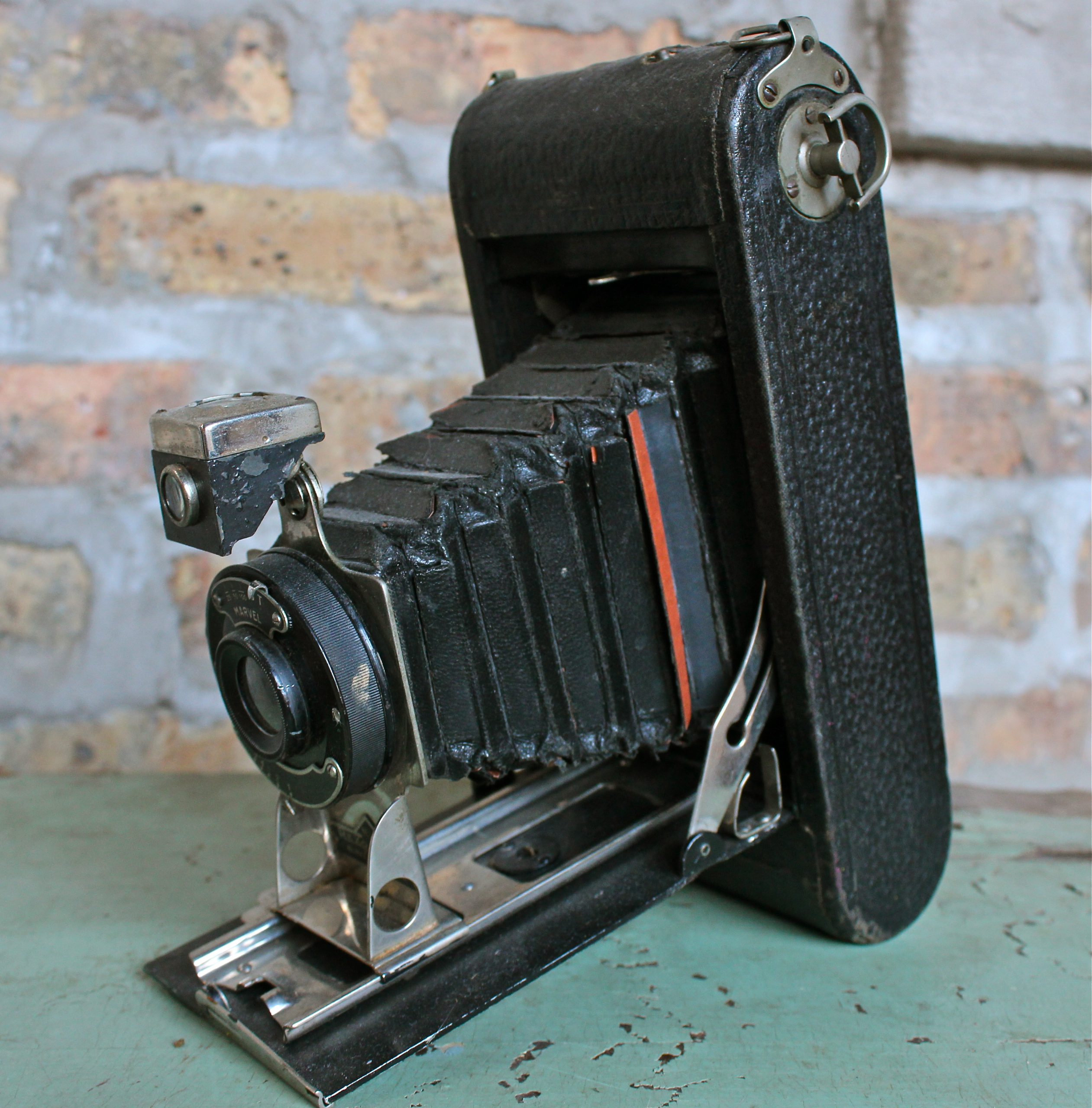 By 1915, New York’s Eastman Company had adopted a recurring tagline in most of its magazine advertisements: “If it’s not an Eastman, it’s not a Kodak.” This was a not-so-subtle way of reminding the American public that—while there were an increasing number of new, cheap, Kodak-like cameras flooding the market—all of them were mere impostors; cheap pretenders to the throne. Eastman’s Kodak, the first kid on the block, was still king. This message proved pretty effective in burying more than a few upstart camera companies during the World War I years. Chicago’s Burke & James, however, were not among the fallen. 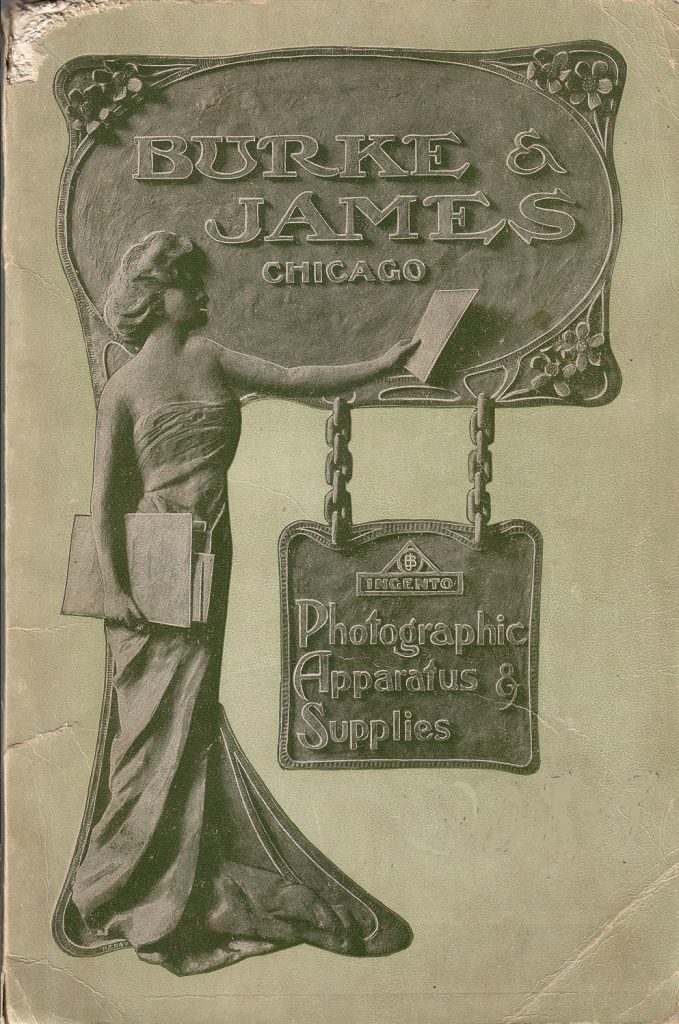 When you have a brand new technology that just about every living human wants to own, the resulting overnight industry generally leads to a Wild West atmosphere, with early patent holders fending off challengers while simultaneously trying to stay one step ahead of them. George Eastman had unveiled the first Kodak with rolled film in 1889, and it was so successful that the name “Kodak”—a nonsense word of his own creation—had legitimately become synonymous with the product. There was no time to celebrate, however.

By the mid 1890s, new developments in film (pun, sadly, intended) were making headlines on an almost weekly basis. If you were a photo-phile at the time, you were either experimenting with existing cameras or gradually inventing your own. In 1896, Henry Burke was merely the “temporary secretary” of the Chicago Central Y.M.C.A. Camera Club—a new enthusiasts group that was still working on getting dark rooms installed in the Y.M.C.A. facilities. A year later, Burke was suddenly a business owner, partnering with David James to launch a small camera company of their own.

After a slow start, Burke & James got rolling manufacturing budget-priced cameras and photo equipment, wisely staying afloat by serving as a distributor for other small companies, as well. By 1900 or so, they had offices at 118 W. Jackson Blvd, and by 1915—the approximate origin point of the “Rexo Junior” camera in our collection—they had set up a larger facility at 240-58 E. Ontario Street in the thriving St. Clair manufacturing district. Over 150 employees were on the payroll.

It’s probably not fair to say Burke & James were making “knock-off” products. Today’s deadly serious camera-collecting community seem to at least acknowledge some level of value and charm in the brand, even if its overall reputation is a bit… sub-legendary.

That said, when you look at our 100 year-old Burke & James folding camera head-to-head with one of Kodak’s leading accordion cameras of the same era, it’s hard not to see the Chicago boys’ reliance on the principle of “same thing, but cheaper.” 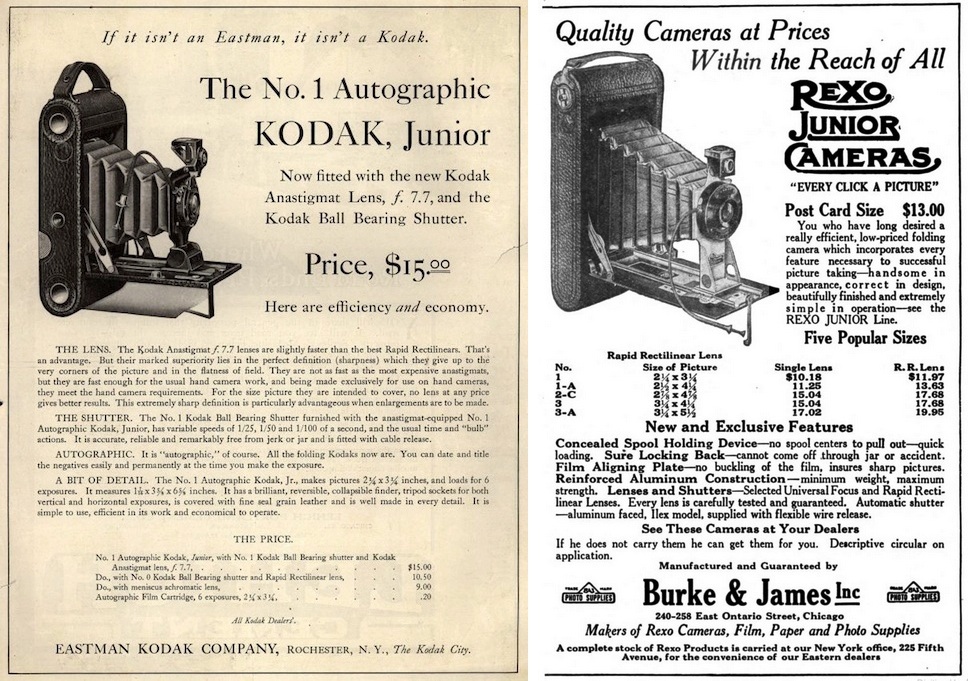 The ad for the No. 1 Autographic Kodak Junior dates from 1915, and leads off with the “If it’s not an Eastman…” line, followed by a bold list price of $15 and a re-assuring sub-tagline: “Here are efficiency and economy.” Do keep in mind that $15 in 1915 was roughly equivalent to $350 today.

The ad for the Burke & James Rexo Junior, on the other hand, was printed in 1919, lists for $13, and delivers the headline: “Quality Cameras at Prices Within the Reach of All.”

“You have long desired a really efficient, low-priced folding camera,” the Rexo ad continues, “which incorporates every feature necessary to successful picture taking—handsome in appearance, correct in design, beautifully finished and extremely simple in operation—see the REXO JUNIOR Line.” 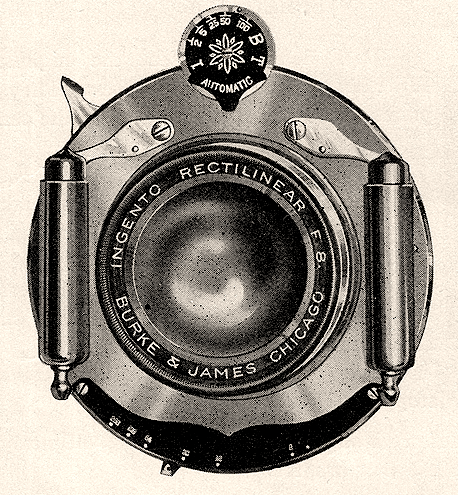 Burke & James employed similar undercutting techniques in their sales of film, photo paper, and supplies, including paper cutters like the one. They did enough to survive and compete, but not quite enough to prosper. In fact, by the early 1920s, David James and Henry Burke both decided to get out of the business while the getting was still good. They sold their struggling company to a veteran camera industry man out of New York named George Drucker, and it was a move that saved the business.

For insight on Drucker, I’ll rely here on the accomplished Chicago photographer Thomas Yanul [1940-2014], who shared his memories of the Burke & James president on an online message board way back in 2001. Even digital archives sometimes need dusting off.

“Although I must echo the reports of others as not being an expert on Burke & James (probably no one is), I did know the company’s owner very well. His name was George Drucker. I would have to go find my old notes somewhere on specifics on Drucker’s ownership, but from the top of my head I will relate what I recall. According to Drucker and his chief lens man—Hans Roderweiss—Drucker bought the company known as Burke and James in the early 1920s. Hans said the company at that time was simply a shell; a name that really no longer had much value. It had come on hard times and in essence was bankrupt when Drucker bought it. He built it into a very large general photography sales and manufacturing facility. Although its true that many of its cameras and other equipment were of less than top quality, it nevertheless filled a large niche in the markets for the demands of equipment, especially after WWII. 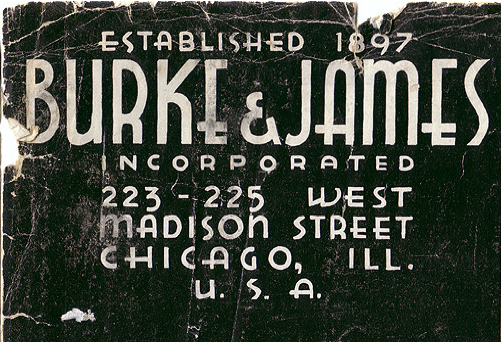 “The company was in several large multi-storied buildings in Chicago through the years, all around the edges of the downtown area [addresses included 425 S. Wabash during the late ‘20s and 223 W. Madison St. by 1938 onward]. It really did have a large manufacturing facility and a complete lens repair, coating operation. Several of Drucker’s brothers worked there also. Roderweiss was with Drucker the entire lifetime of the operation, becoming chief lens man with the company. When Drucker finally sold the company in the early ‘70s, it was still a large and prosperous operation, but soon declined under its new owner. It was basically stripped of its manufacturing operations and continued for a time as a mail order house, but competition soon overwhelmed that small part of the business and it basically just disappeared. A lot of the lens operation was given to Hans, who retired when Drucker sold the company.

“Drucker was a consummate salesman, and he was very well known and loved throughout the country by the commercial end of the photographic business. George lived to the ripe old age of 94 or 95 and was still going strong up until about six months before he died. George was married to an “older woman” (one year older than he), who died one year later, probably of a broken heart. George often said to me, ‘I’m a clean desk man’—stating that ‘anything that comes across my desk that day gets done before I go home. That’s how you do good business.’ I suspect George died with a clean desk… For whatever its worth.”
—Tom Yanul 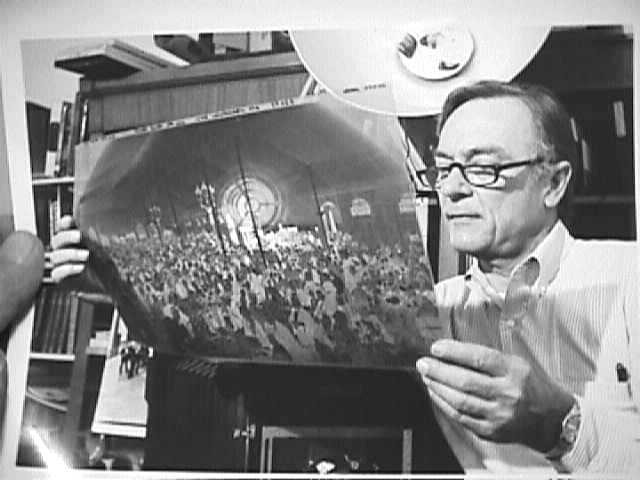 I’d like to think Thomas Yanul would be okay with me using his words to keep his old friend George Drucker on the fringes of the internet. In Yanul’s own obituary in 2014, the Chicago Tribune made special note of his great contributions to the photographic history of Chicago—particularly rooftop panoramas. A friend of Yunel also described him as having “a romantic view of life. He thought history should be recorded.” We concur. 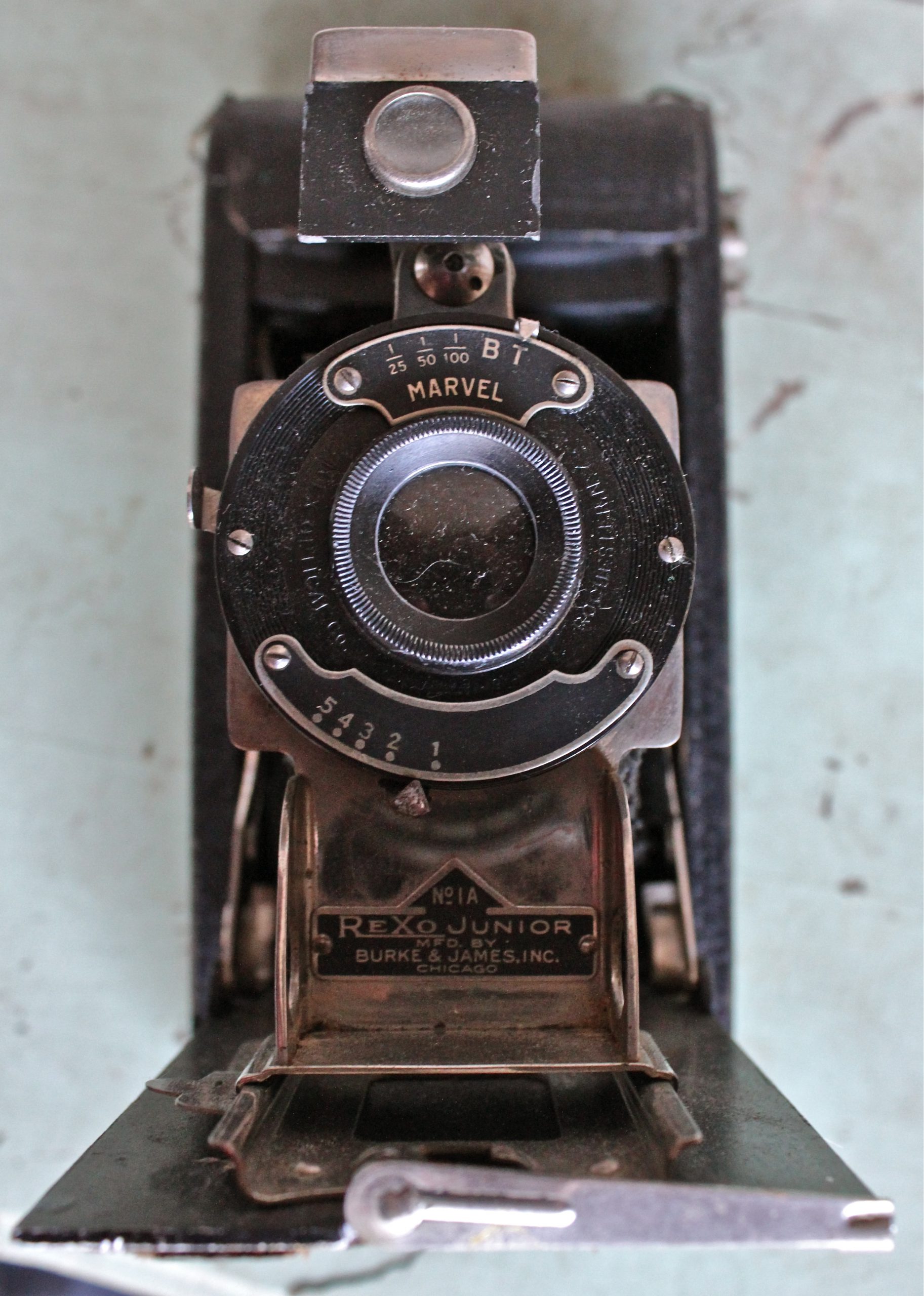 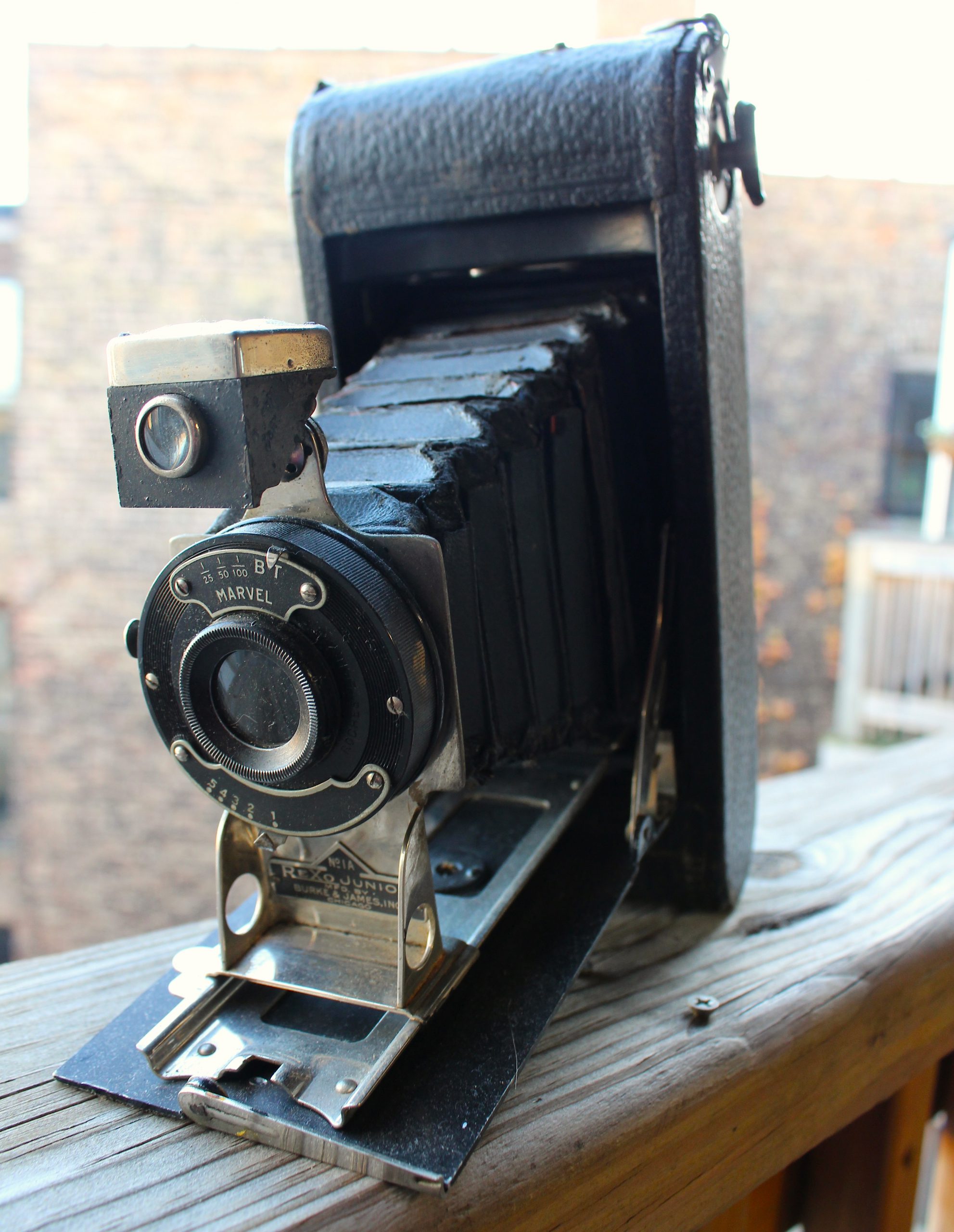 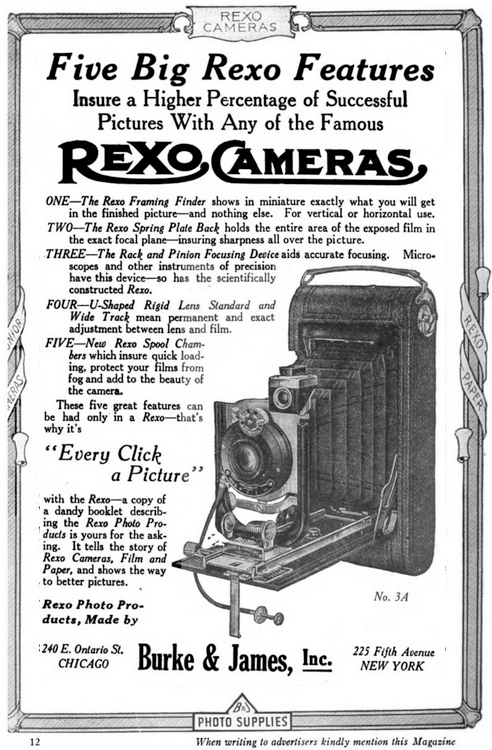