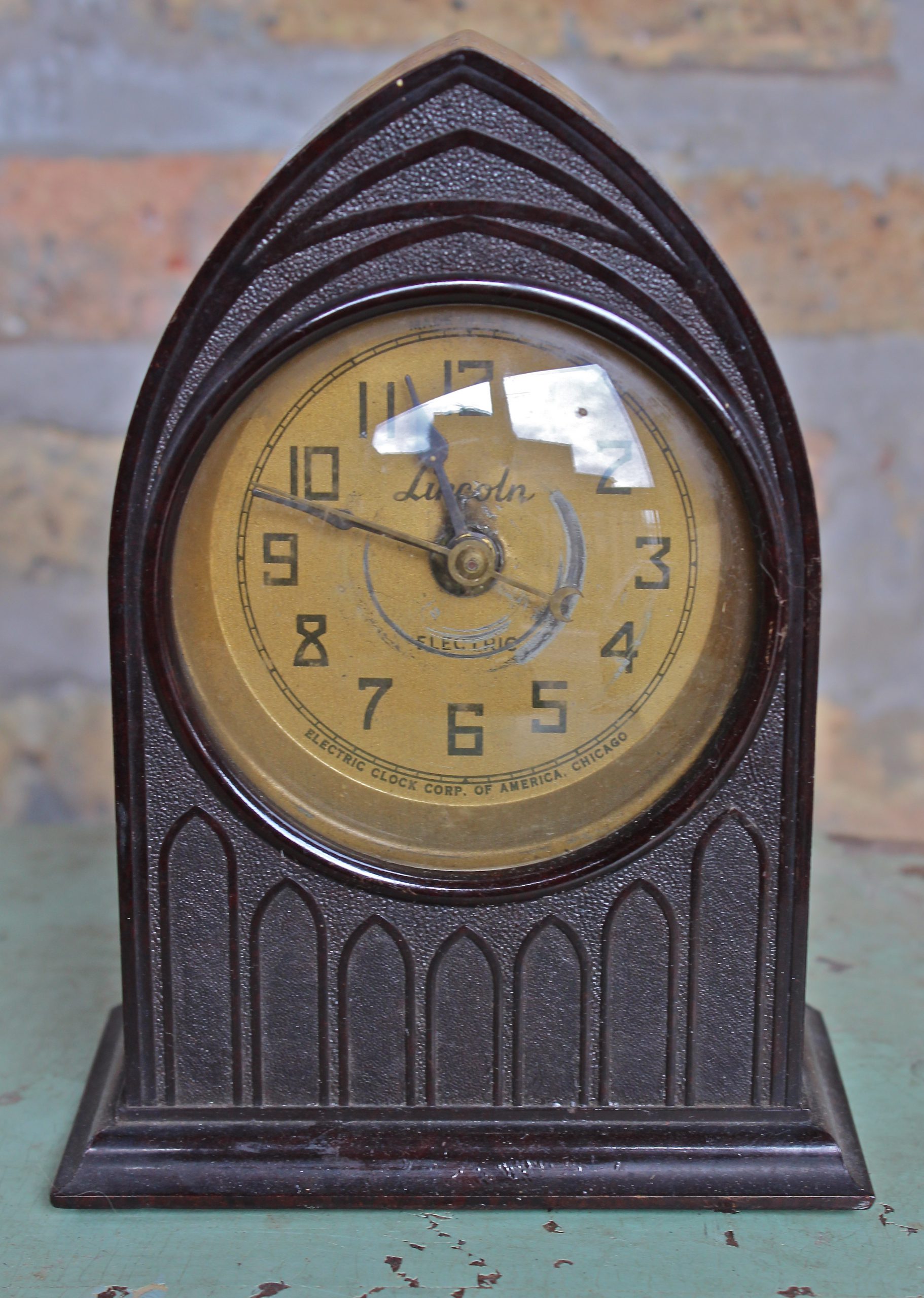 What’s in a name? I suppose a 20th century Shakespeare might have said that an electric clock, under any brand name, would still tell the same time. To Henry T. Schiff, however, the name was the thing.

In the mid 1930s, Schiff was the president of the very prestigious-sounding Electric Clock Corporation of America, and the “Lincoln” series—paying homage to Honest Abe himself—was briefly his flagship brand. Nevermind that several of the Lincolns were also outright knockoffs of clocks made by Chicago’s Hammond Clock Company. In Henry Schiff’s world, good business meant taking a bit of a creative license with what had come before—no matter what traditional ethics or copyright law might have to say about it. It was a philosophy that got him in plenty of trouble, but also left a substantial legacy. 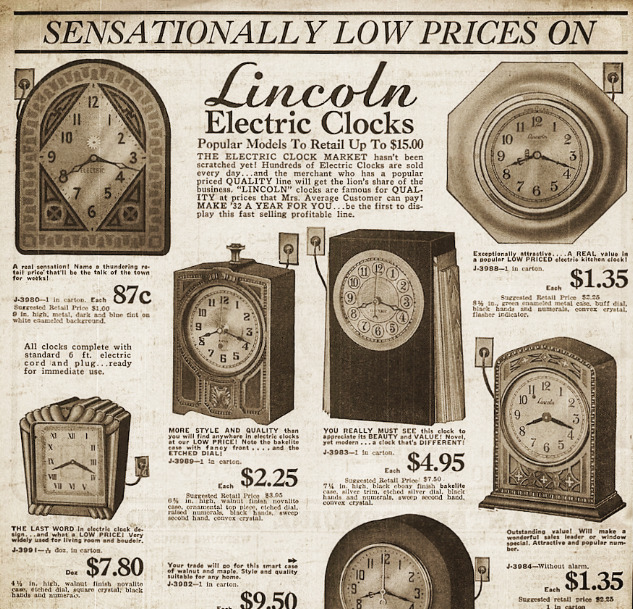 To be fair, Schiff was no charlatan when it came to mechanical skills. He collected numerous patents in the first few decades of the 20th century, covering everything from shaving implements and cigarette lighters to early phonographs. According to a 1916 issue of The Grand Rapids Furniture Record, Henry T. Schiff was, in fact, “a pioneer in the talking machine business, having been engaged in the industry for over 20 years.”

Of course, that particular article was likely paid for by Schiff himself, since it matches the language in his own concurrently running ads for the Vitanola Talking Machine Company.

“Back of every achievement is a personality,” read one of those Vitanola advertisements from the same 1916 publication. “Back of the Vitanola is Mr. H.T. Schiff, President, for twenty years a pioneer in the industry. His inventions, his skill in combining the proper materials in the entire reproduction mechanism, and his intimate knowledge of quality manufacturing are all embodied in the Vitanola. He says, ‘The Vitanola is made as carefully as an expensive watch, but endures like a railroad engine.’ That is his way of telling about the permanently pure tone reproduction of the Vitanola.” 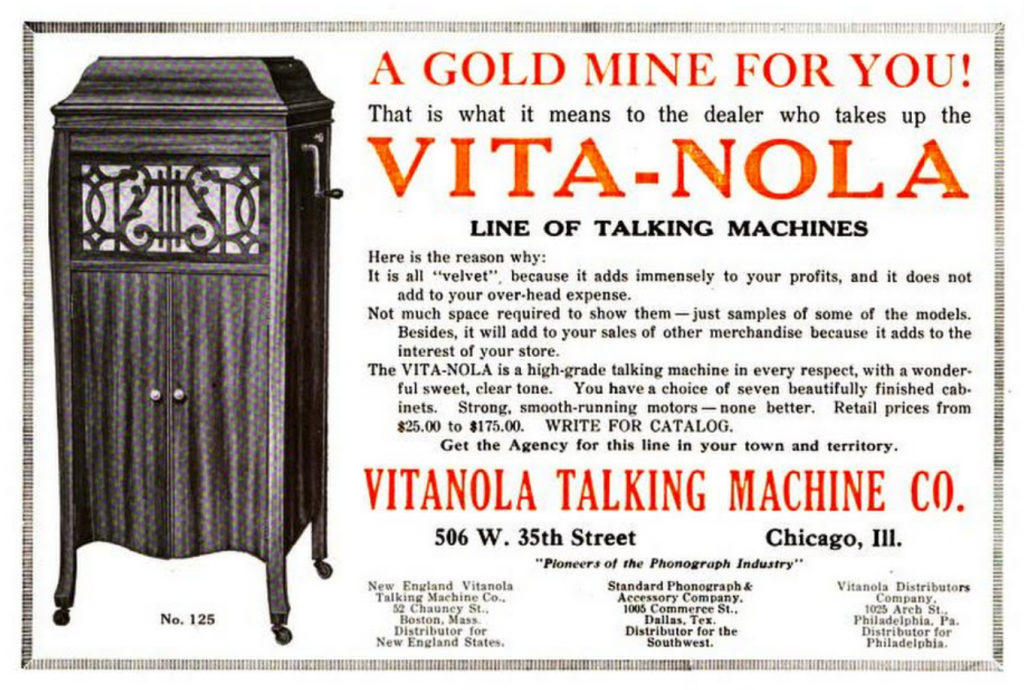 Schiff operated Vitanola from a headquarters at 208-212 South Wabash Avenue, and later 506 W. 35th Street right next to Comiskey Park. It was a reasonably successful venture. In a sea of more than 200 upstart phonograph makers during this era, he had managed to gain some surprising ground on the far bigger national manufacturers like Edison, Columbia, and Victor. It was the latter company’s “Victrola” brand, in fact, that had inspired Schiff to choose the similar-sounding “Vitanola” name—hoping perhaps to fool consumers who squinted when they looked at the label. This strategy drew the ire of the Victor Talking Machine Company, but it worked well enough to influence every business decision Henry Schiff made for the rest of his life.

“He was way ahead of his time,” Schiff’s daughter Dollie Galter said of her father in an interview with Chicago Jewish History in 1992. “He wanted to buy a radio station and sell advertising. Everybody said nobody will listen to you. Then he wanted to build a place where people could drive in automobiles to see movies. He was always way ahead of everybody.”

His daughter even claimed that Schiff was “the first one to make candy out of rice crispies.” Hey, she loved and admired her dad. It’s sweet. But she did also skip the part about all the lawsuits. 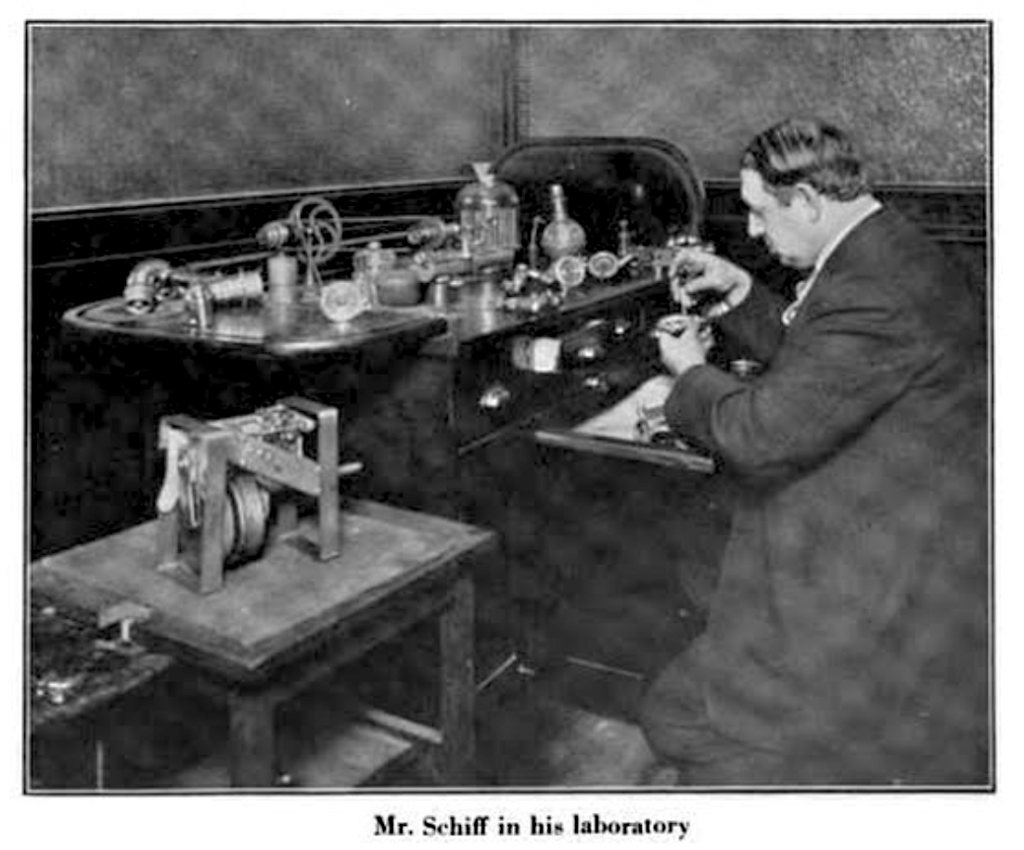 During the Depression, when businesses were in no mood to see their good names usurped by impostors, Schiff was taken to court repeatedly over patent and trademark disputes. The Chicago Flexible Shaft Company challenged his use of the “Shavemaster” name; the Elgin National Watch Company shut down his use of their name on razors and cameras; and yes, the Hammond Clock Company waged war on the Electric Clock Corp—not for branding in that case, but for stealing patented designs.

According to lore, Mr. Schiff had originally stopped by the Hammond offices around 1930 looking to get a license to legally manufacture some of the company’s patented clock designs. Despite the tough economic times, electric clocks were all the rage, and Henry felt his talents could be of use. Unfortunately, company president Laurens Hammond, perhaps recognizing a fellow Type A personality in his midst, was having none of it. “Bugger off and come up with something yourself,” he said (according to no one). Schiff retreated with his tail between his legs, but he wasn’t entirely deterred. 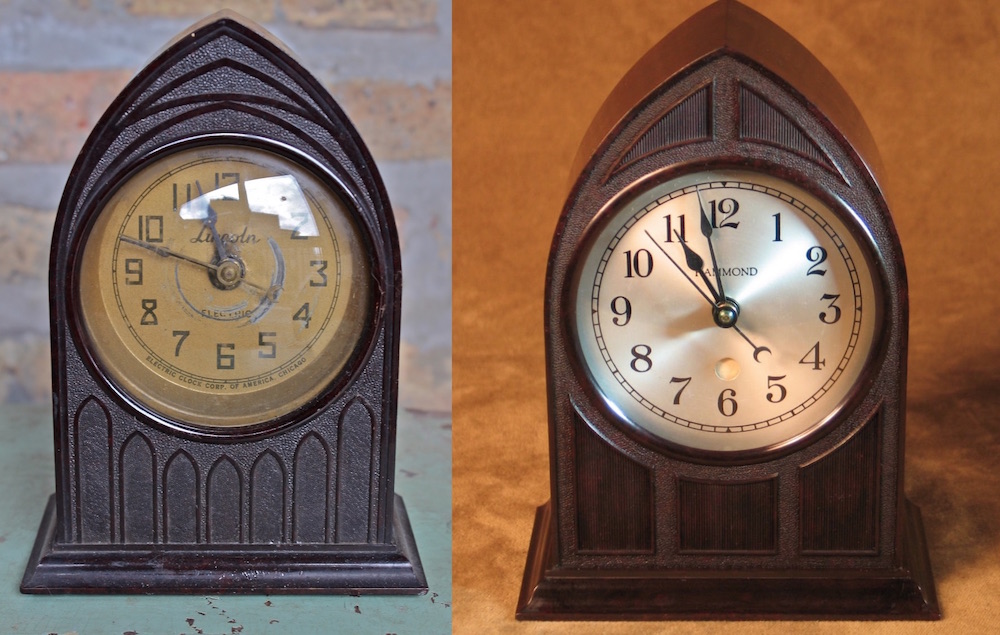 [Our Lincoln clock on the left, a Hammond Ravenswood on the right. Hmmm.]

Refocusing, Schiff quickly hatched a new plan. He purchased several Hammond clocks, took them apart piece by piece, and systematically mapped out their contents for the purpose of building his own identical models. Now that’s showing initiative! He also boldly gave his shady operation that almost absurdly legitimate name—the Electric Clock Corporation of America—and set up offices at 500 South Throop Street, with himself, his wife, and his son as the sole company shareholders.

By 1932, Schiff was selling an array of Lincoln electric clocks, including the model in our collection—a 7-inch tall, cathedral-style bakelite design with a spin-to-start back knob. It sold for about $1.35, or about $24 in modern terms. To keener eyes, it was also a clear replica of the Hammond Company’s “Ravenswood” model.

By the time the Hammond patent lawsuit reached its conclusion in March of 1934, the full scope of Henry Schiff’s scuzzy business was coming into focus. Along with selling illegally-made Electric Clock Corp. products through traditional commercial channels, Schiff was also accused of privately selling thousands more under the table. He would seemingly convince distributors to take on huge inventories, which they would then package as cheap “give-aways” in special cross-promotional deals. 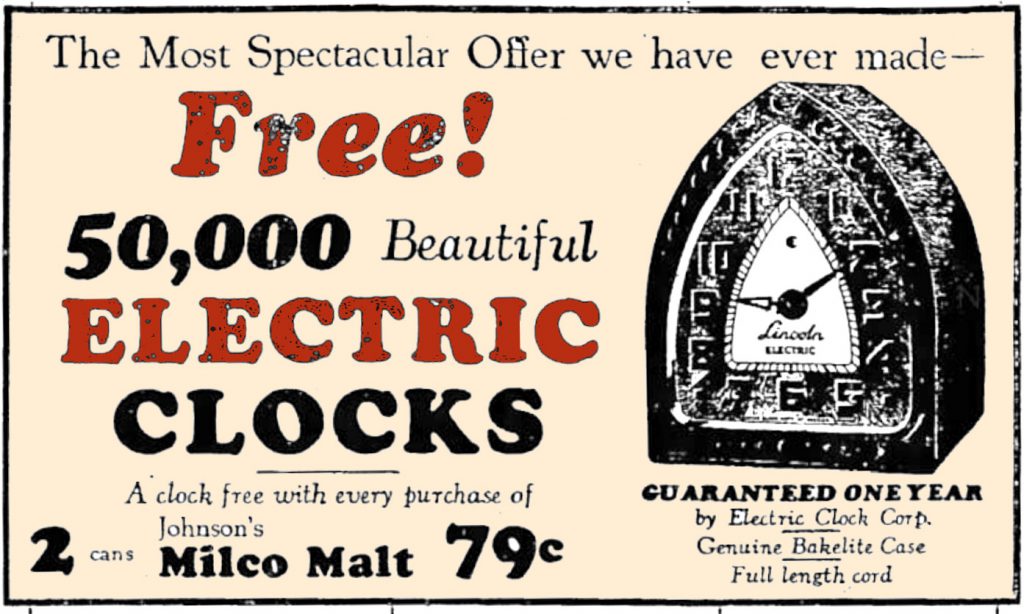 As a further revelation, the prosecution proved that Schiff’s son, owner of 98% of the company’s shares, was in fact living somewhere in Germany and not involved with the business at all. The case was proving pretty open-and-shut. The Electric Clock Corp., which had already gone into bankruptcy by this point anyway, was DOA. Schiff’s master plan of flying under the radar had worked for about three years.

If you thought that was game-set-match for Henry Schiff, however, you’re very very wrong. The aforementioned Shavemaster and Elgin lawsuits actually came AFTER the Electric Clock case. And by 1938, Schiff—at the age of 61—was working with an exciting new business partner: his son-in-law Jack Galter, husband of his daughter Dollie.

Jack Galter, a former jazz drummer during the ’20s, had been inspired by Henry Schiff to pursue manufacturing as a career during the Depression. Schiff taught him about the value of making affordable products for the common man, and about the old game of brand-name appropriation and those loose ends in the U.S. trademark system. Galter’s company, the Spartus Corp., soon emerged as a leading producer of low-budget clocks and cameras, following the Henry T. Schiff playbook to a tee. Like Schiff, Galter was also sued numerous times, but kept going back to the well, using familiar industry names to win consumer confidence on new, unrelated products.

Long after Henry Schiff’s death, Jack and Dollie Galter were among the wealthiest—and most respected—philanthropists in Chicago, donating millions to local hospitals and spinning their knockoff tech business into a real estate juggernaut.

“[Henry Schiff] was a fascinating man,” Jack Galter said of his mentor in 1992, “a fantastic operator.” 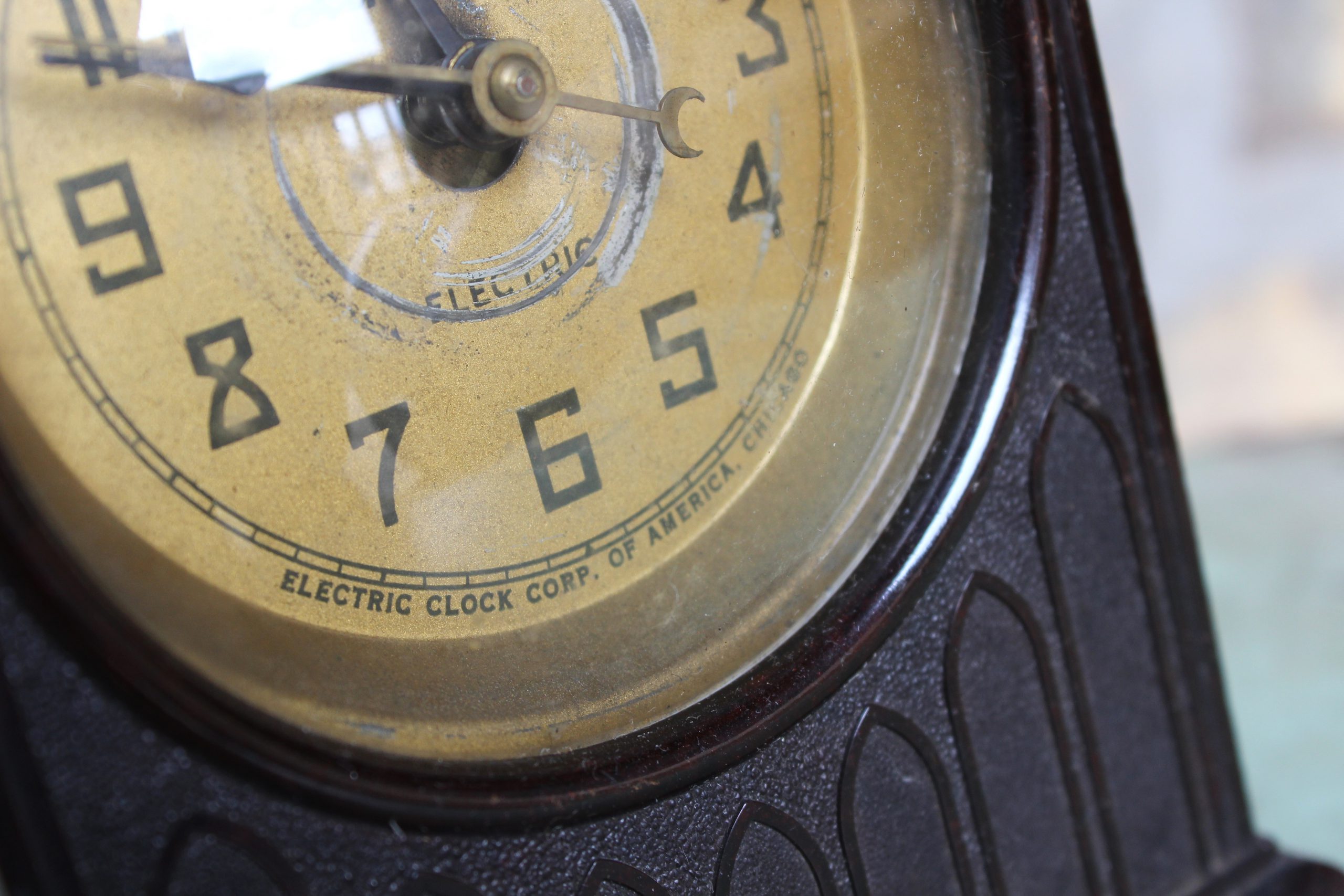 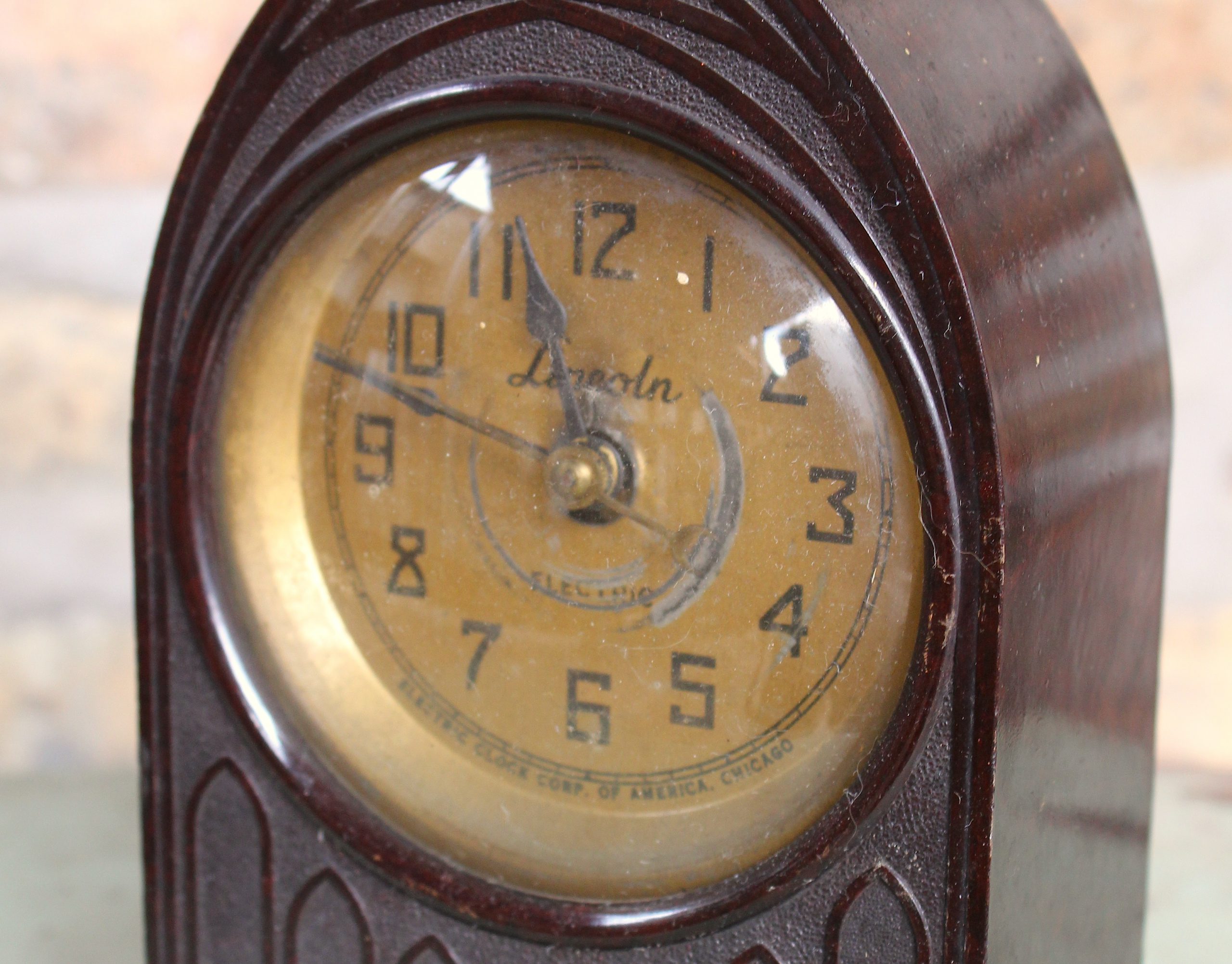