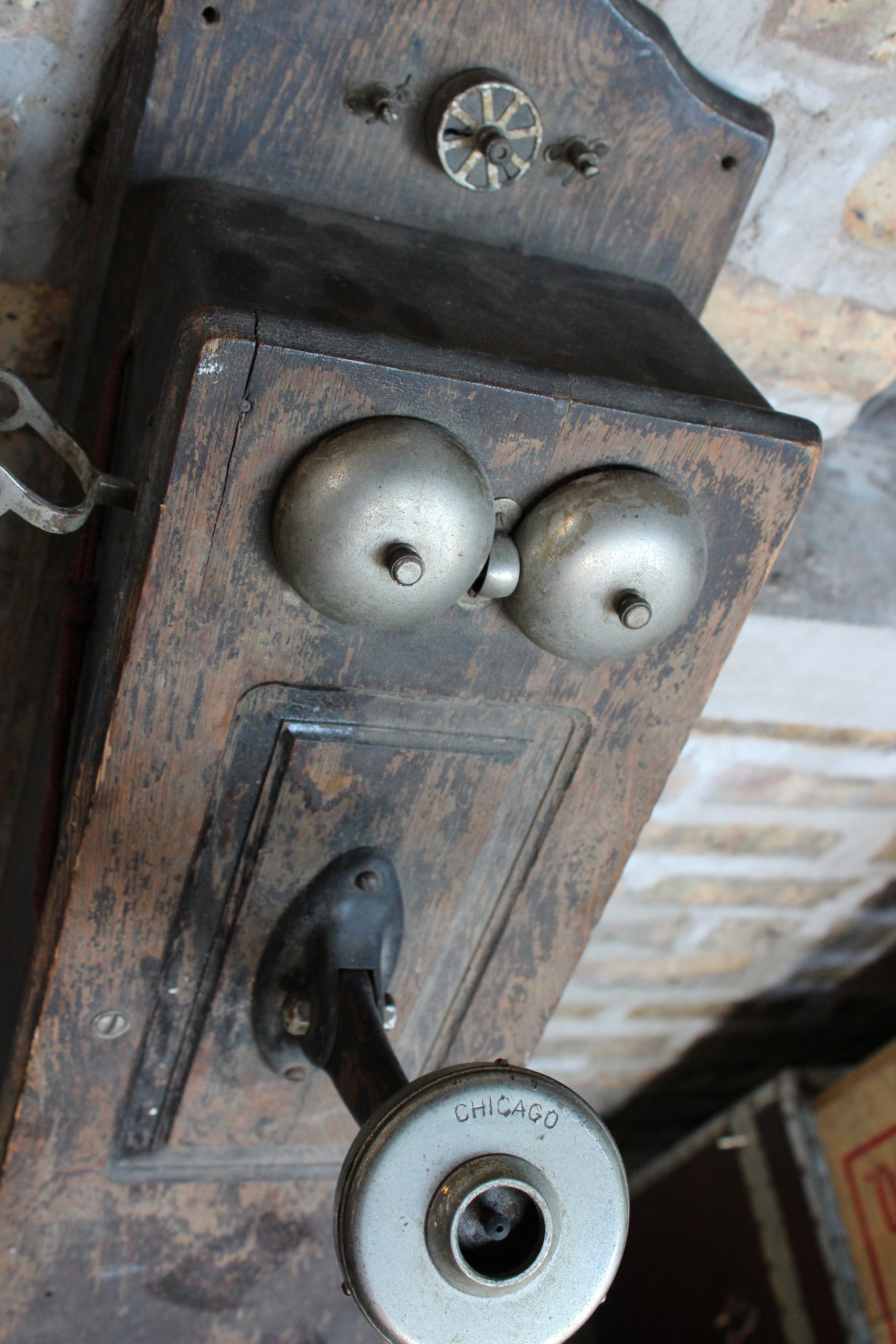 In the August 1900 issue of everybody’s favorite McKinley-era trade publication, Telephone Magazine, the Chicago Telephone Supply Company is referred to as “one of the oldest of independent factories, manufacturing everything that enters into the production of Chicago telephones, switchboards, and parts.” 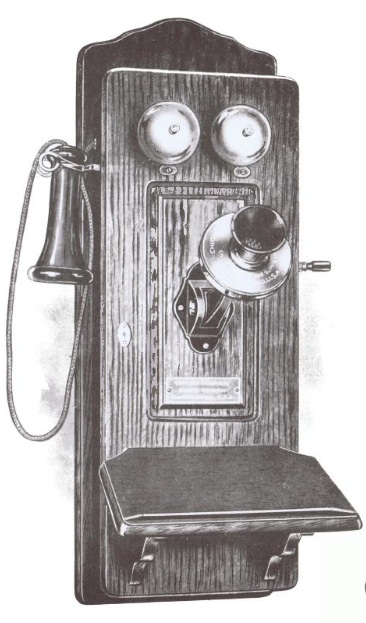 In this case, “one of the oldest” actually meant it had an illustrious history of exactly FOUR years. These were, after all, the frontier days of the telecommunications industry. Alexander Graham Bell’s original 1876 patent on the telephone (earned with no shortage of controversy over Chicago’s Elisha Gray) had already expired by 1893, and a mad international dash had ensued, with every two-bit technician and overzealous investor trying to gain a regional foothold in the trade.

Chicago, as one might expect, became a central battleground in the telephone wars. The Western Electric MFG Co., which Elisha Gray had founded, ironically became an exclusive equipment provider for the dominant Bell Telephone System. But other companies set out to build superior switchboards and phone boxes to fill the growing non-Bell market. Just about all of these manufacturers were originally based in Chicago, and included the Automatic Electric Company, the Kellogg Switchboard and Supply Company, Stromberg-Carlson, the Swedish-American Telephone Co., and our current subject, the Chicago Telephone Supply Co.

Unlike some of its competitors, the CTS Co. wasn’t founded by experts in the field of wired communications. This was a calculated business venture, launched in 1896 by a father-and-son team of successful Iowa-born bank managers. Abington J. Briggs, a former Union soldier with the 3rd Iowa Cavalry, was still running a pair of private banks in rural Nebraska as late as 1895, with his son George, age 27, working under his wing. They had the wisdom for handling finances, and the ability to recognize a potentially lucrative opportunity when they saw it. So, after relocating to Chicago, the Briggs men partnered with local lawyer S.A. Buffington to organize the Chicago Telephone Supply Company. 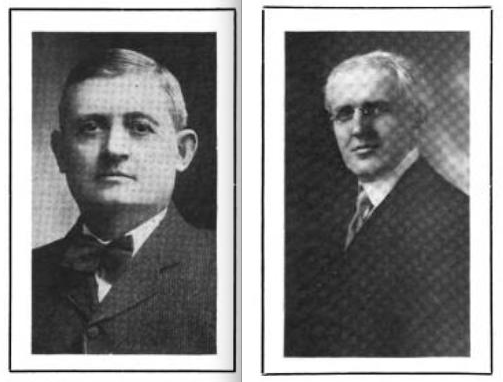 [A.J. and George A. Briggs, founders of the Chicago Telephone Supply Co.]

While headquartered at 133 S. Clinton Street (briefly sharing an address with the Pelouze Scale Company), the CTS Co. also had a main factory at 28 W. Washington Street, employing about 100 workers. Unlike some of their local competitors, CTS had no affiliations with major network providers like Bell. Instead, they built phone equipment for independent networks, and sold products through indie suppliers and a rapidly growing mail order business.

By 1900, A.J. and George Briggs had turned their upstart company into a major player in the industry, with about 250 people in total employed in the Chicago area. The wisdom of the Briggs’ approach stemmed from their own lifelong knowledge of the Great Plains states, and the often-overlooked potential for the telephone market in rural areas of the country.

The Chicago Telephone Supply Company also earned a reputation for quality, as Briggs and Briggs made a point of hiring the top minds in the field, and spending the extra dollar to test and re-test any and all new technology before it could be implemented into their designs.

CTS was also one of the few phone makers that built its own magneto. The X-Men villain? No, the magnet-driven, electrical generator within the phone box (usually hand-cranked) that produced the electrical current necessary to ring the phone, light up a switchboard, and notify an operator of a call. In bigger cities, technology had evolved past the magneto by the early 1900s, but most rural lines—the CTS specialty—still needed them. To cover all the bases, the company manufactured its own switchboards, too, with the “Chicago Express” earning a sterling reputation. 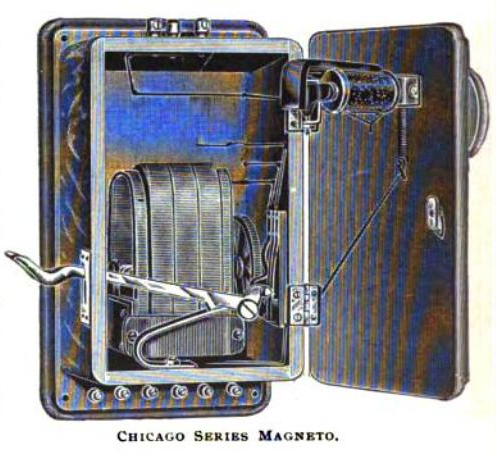 By 1902, the Chicago Telephone Supply Company had managed to outgrow Chicago itself—or more accurately, they got a good deal on a massive new five-acre manufacturing space 100 miles east of the city, in Elkhart, Indiana. The Briggs family was now presented with a subsequent choice: change their respected name brand for geographical accuracy, or remain a “Chicago” company in the middle of Indiana. They opted for the latter. 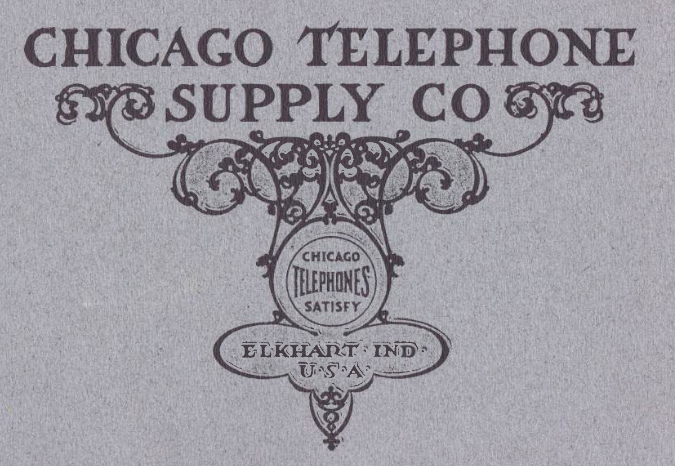 In truth, even the “Chicago” telephone in our collection was built some time between 1902 and 1910—at the Elkhart plant rather than Chicago. So, in this rare case, “Made in Chicago” refers exclusively to the company rather than the actual antique.

Our CTS singlebox wall phone has suffered its share of damage over the past century. Made from either walnut or oak, the wood has been scuffed up a good bit. There was likely a protruding shelf segment in the front of the box originally (now gone), and the hand crank on the right side is absent, as well. The receiver needs repair, and the inside of the box has been mostly gutted, with that state-of-the-art magneto generator now vanished to parts unknown. We do still have the original Chicago branded transmitter and name plates, however, and the original nickel bells still ring… if you shake it.

Meanwhile, in the town of Elkhart, people might have felt confused about being the home of a proud Chicago-branded company in the early 1900s, but they quickly benefited from the arrival of the new factory, which continued to grow as Chicago Telephone Supply expanded into radio, television, and various other electronics over subsequent decades. 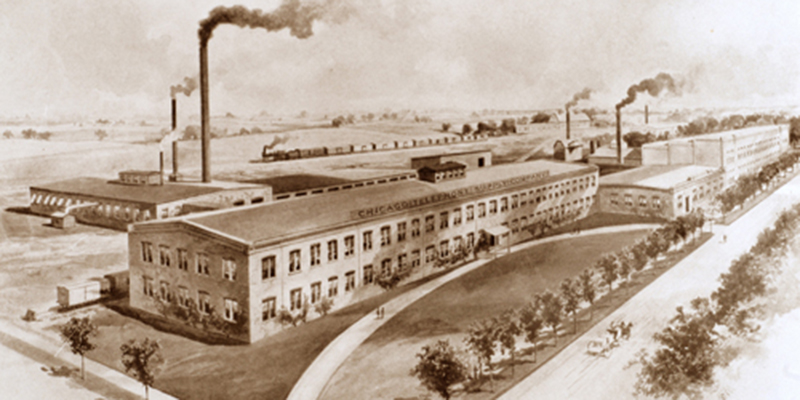 In 1960, twenty years after the company stopped making phones, the corporate identity was finally updated, as the CTS Corporation was born. Today, CTS (which presumably now stands for nothing) has factories and offices in 18 cities worldwide, from Elkhart to Juarez, Mexico; Glasgow, Scotland; and Yokohama, Japan. There are also a couple locations near Chicago, where it all started, in the towns of Lisle and Bolingbrook. Not a bad legacy for a couple of Iowa bankers in the 1890s. Start a business with your dad, kid. It just might pan out. 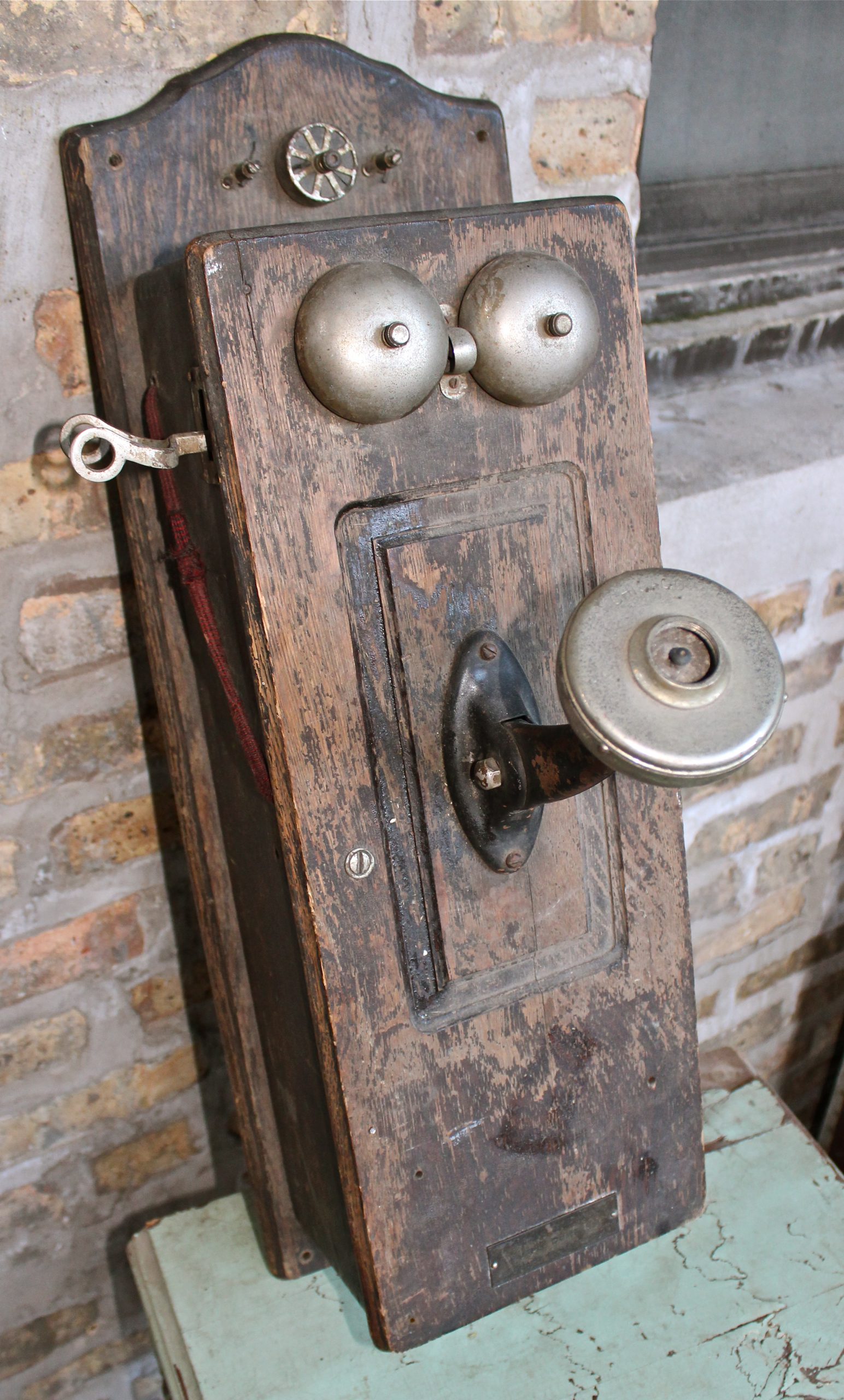 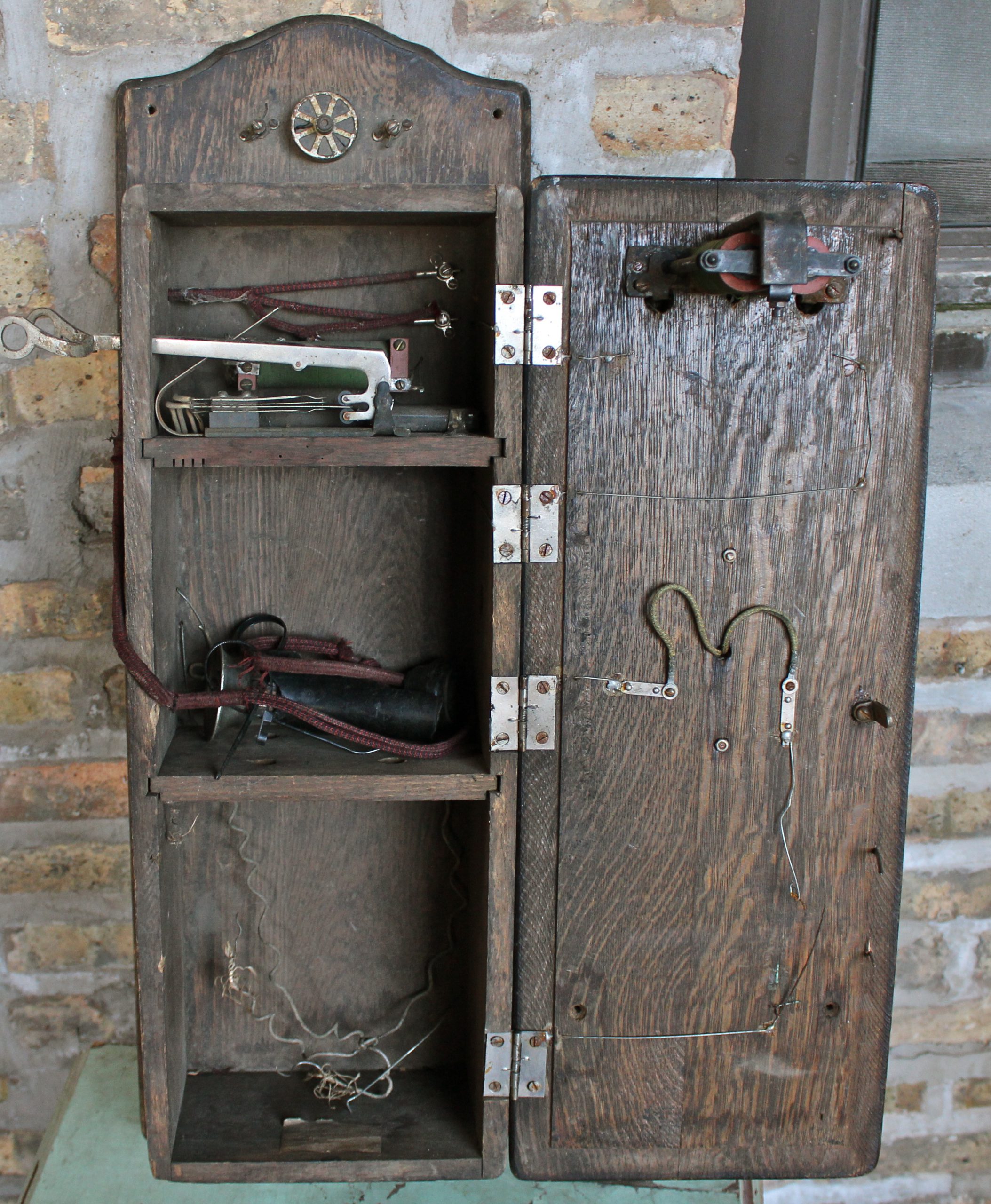 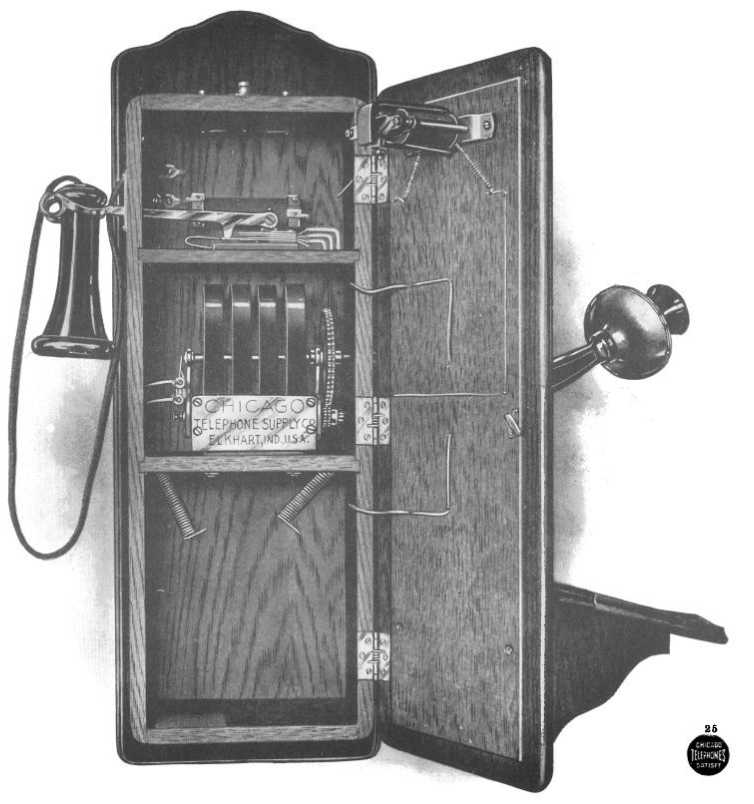 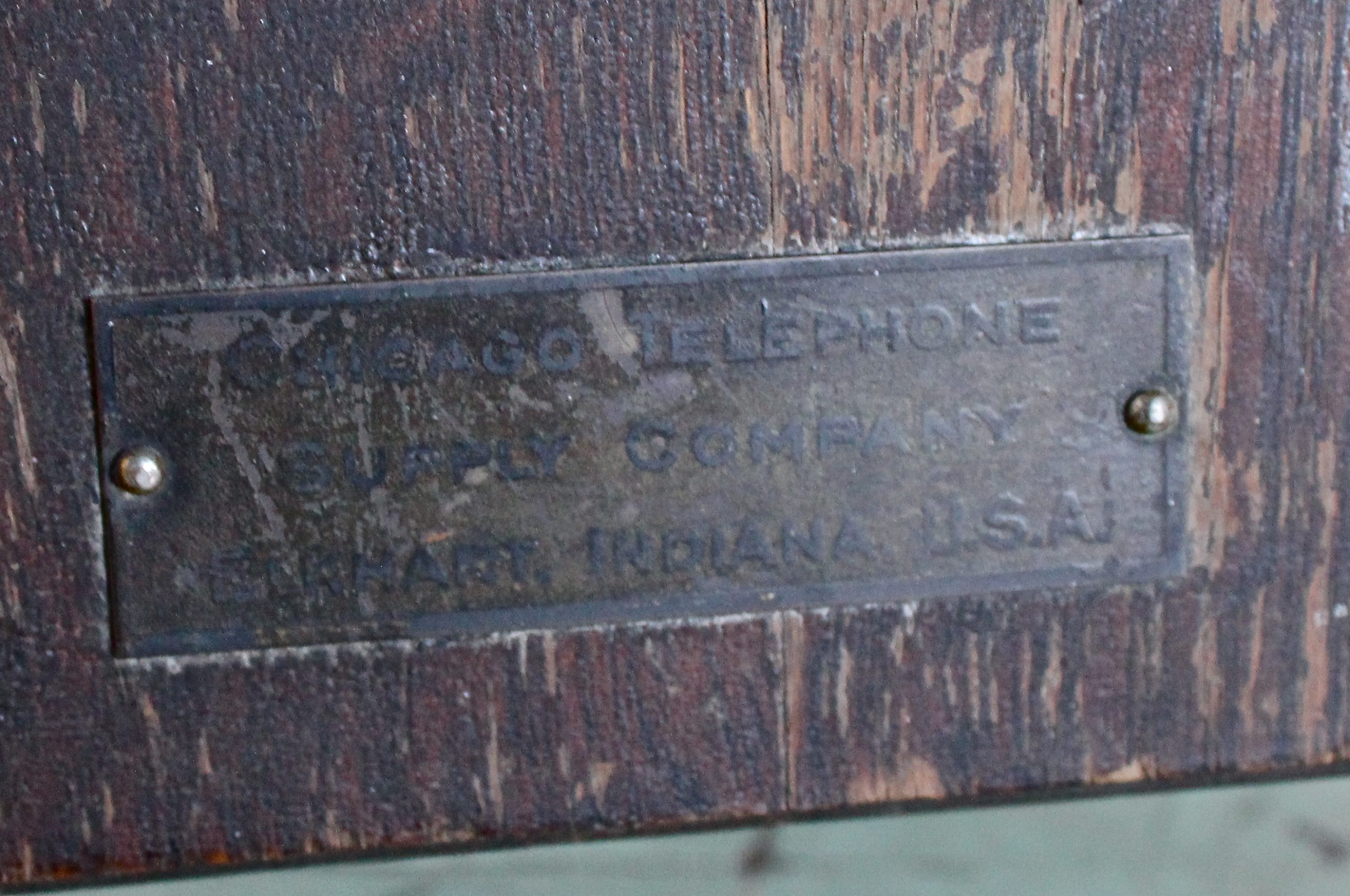