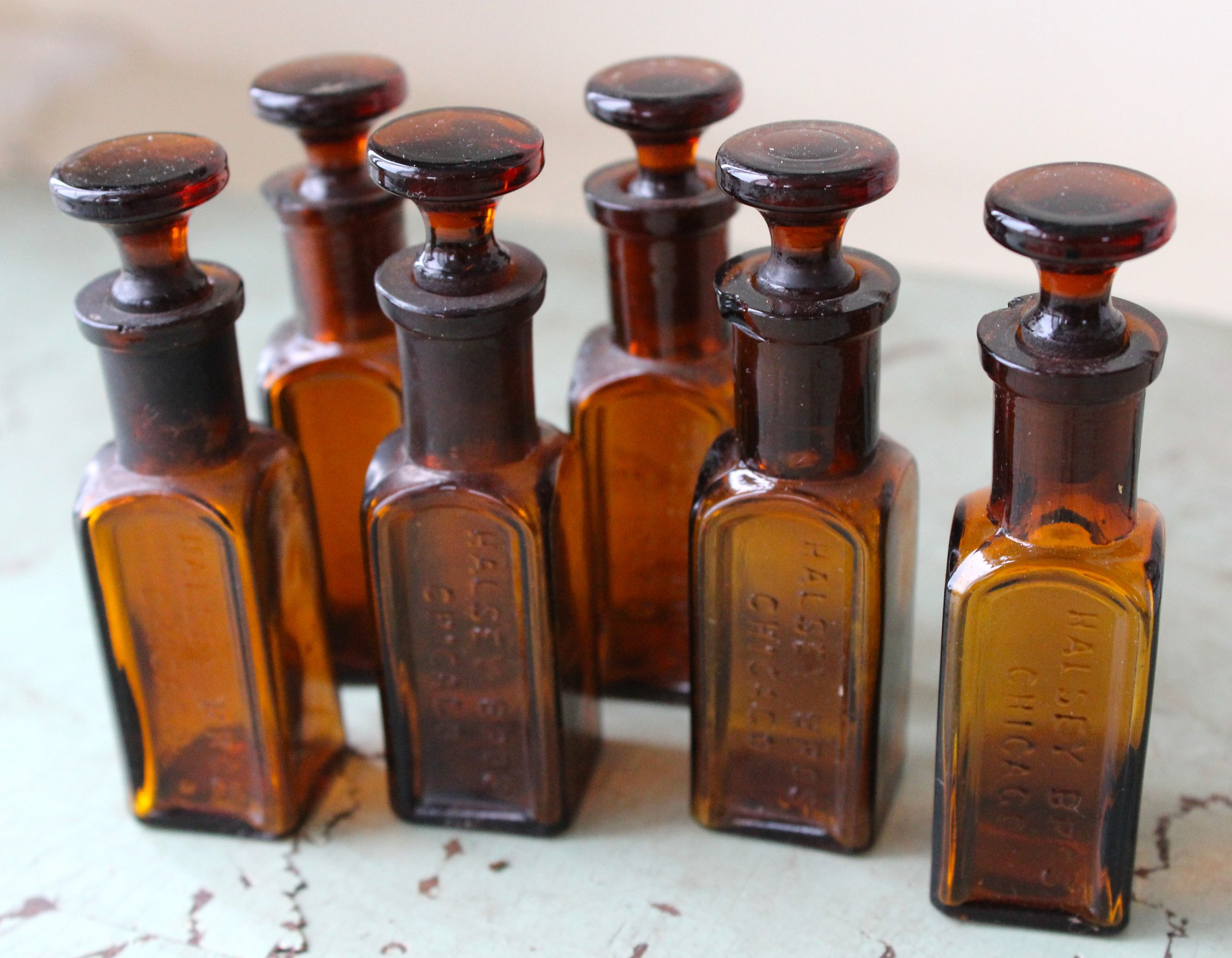 Chicago brothers Clinton, Tappen, and George Halsey were all accomplished chemists and pharmacists. But from the founding of the first Halsey pharmacy in 1855 (at 94 LaSalle St.) straight on into the 20th century, their success was largely rooted in a very specific belief system. The Halseys, as it turns out, were early champions of homeopathy—a branch of “alternative” medicine that broke far enough away from pure quackery that millions of people still swear by it today. 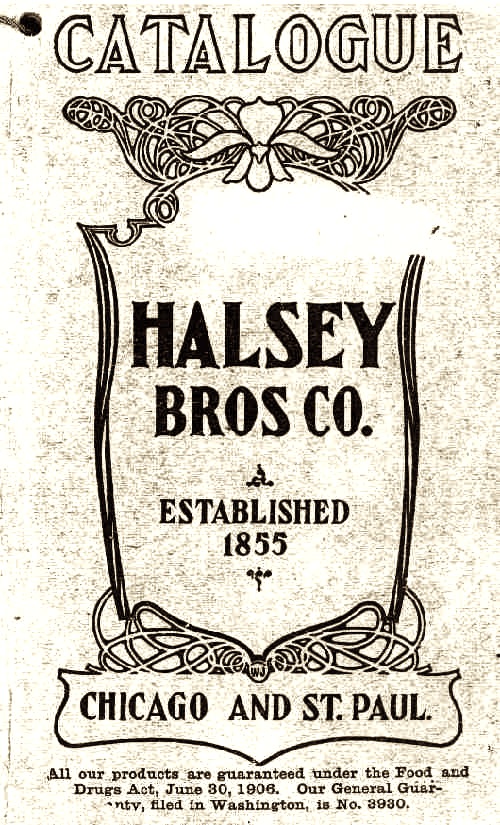 On one hand, beautiful amber apothecary bottles like our museum pieces were made to serve a simple, practical purpose—you put medicine in ‘em. The aesthetic appeal, however, much like the Halsey name on the front of each bottle, wasn’t arbitrary. Part of the allure of the homeopathic movement was that it moved medical un-orthodoxy in a classier direction, with sophisticated, well-read, qualified gentlemen—like the Halseys—calmly and carefully explaining its seemingly endless benefits over traditional, stuffy medical science.

The homeopathy movement was started by a German physician named Samuel Hahnemann in the early 1800s, but since trends traveled a bit slower back then, it didn’t really make its big splash in America until the middle of the century (the American Institute of Homeopathy was founded in 1844).

The basic tenant of homeopathy, then and now, is “let likes be treated by likes.” The theory works like this:

⇒ Person A is sick.
⇒ Person B is healthy.
⇒ A treatment is created that, in a full dose, would make Person B as sick as Person A
⇒ That treatment is given, in a very small dose, to sick Person A.
⇒ The smaller the dosage, the better the effect!

Hey, it sort of sounds reasonable at first. Building antibodies can help fight disease, etc. But the treatments prescribed in these cases had no basis in science, and they applied to “ailments” far beyond a fever or a cough. In fact, according to Halsey’s Homeopathic Guide of 1885, fighting a fire with a fire can be taken quite literally, as evidenced by their recommendation for treating “burns and scalds”:

Similarly, to support the notion that a smaller dosage does the most good, homeopathic pharmacists regularly diluted existing medicines—substantially—before selling them to patients. Hence, you find one of the central criticisms of homeopathy as a whole. High dilution = low overhead. Results were questionable. Profits were not.

Now, certainly, some 19th century homeopathy ambassadors genuinely came to believe in the practice. Others were just hucksters out for a buck. Where each Halsey brother stood on this, who’s to say? But they certainly made a career of bottling, touting, selling, and defending homeopathic medicines. For their time, they were about as well known as a few druggists could get.

Clinton Halsey got the ball rolling in 1855 and ran variations of his own homeopathic drug firm throughout the 1860s, with offices at 147 Clark Street and 66 Lake Street, among others. When he started having health problems in July of 1871, Clinton sold out to his younger brothers George and Tappen, who called their new business Halsey Bros. This fresh new beginning was rewarded, three months later, with the Great Chicago Fire, which destroyed the Halsey pharmacy, forcing yet another reboot. 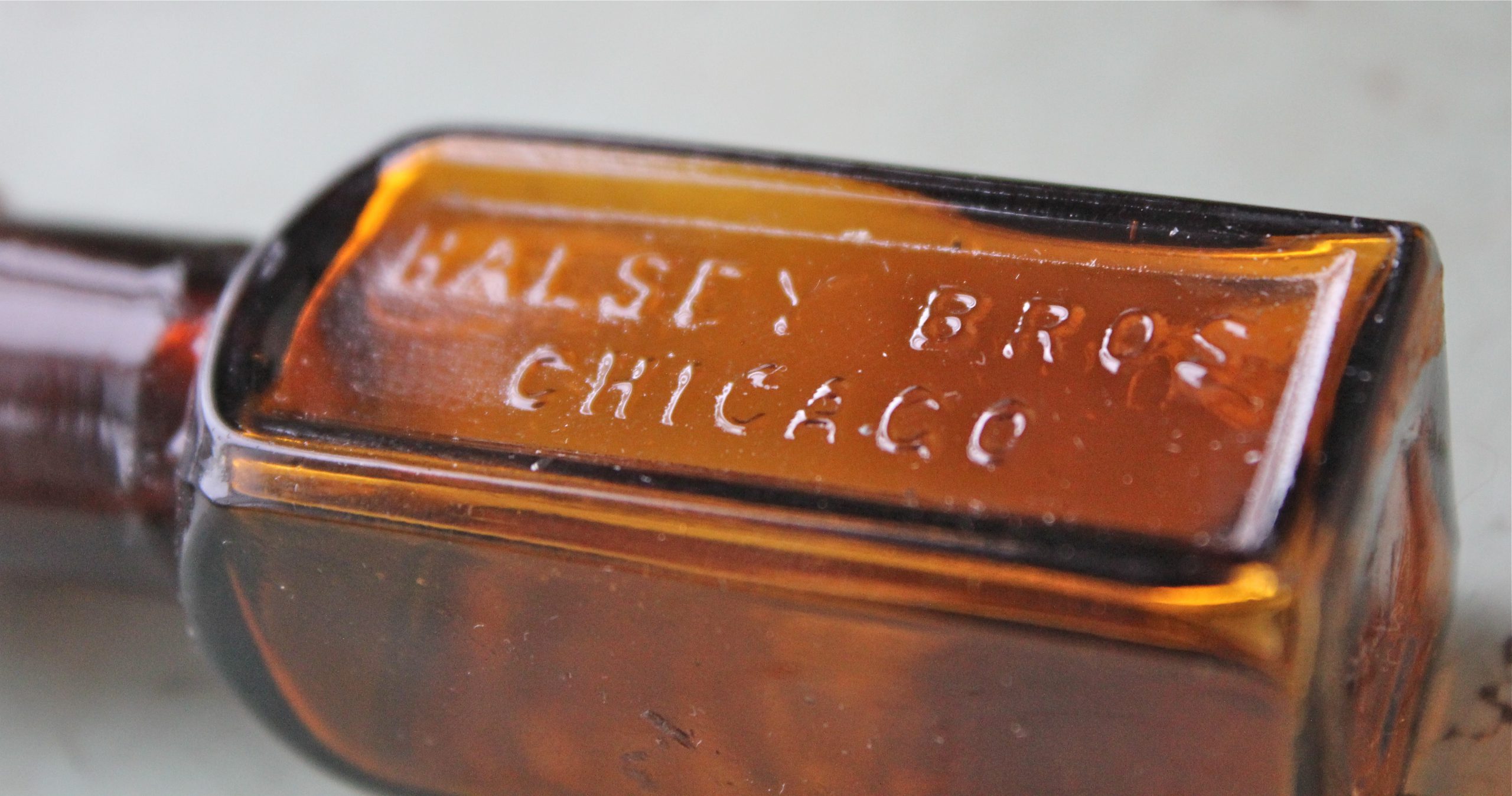 After settling into a few different storefronts on State Street, Halsey Bros. landed at 27 Washington Street for the entirety of the 1880s into the 1890s. During that same decade, George and Tappen had a big parting of ways, with Tappen taking full control of Halsey Bros. while George went off and re-partnered with Clinton to form a separate company called C.S. and G.E. Halsey (not Parliament Funkadelic).

When Clinton died in 1886, George kept their office at 88 State Street and went solo as George E. Halsey, Inc., often publicly distancing himself from any connection to the Halsey Bros Co. Sure seems like he and Tappen had a nasty falling out of some sort. Nonetheless, both companies soldiered on for decades, with Halsey Bros. surviving at least into the 1930s, with offices first at 645 N. St. Clair downtown (through 1926), then at 5547 N. Ravenswood Ave. in Edgewater.

Weirdly, George’s solo office was also on Ravenswood by the late 1920s, at No. 4540. Here, randomly, is written correspondence from 1928 between George Halsey and the famous African-American author and activist, W.E.B. Du Bois. 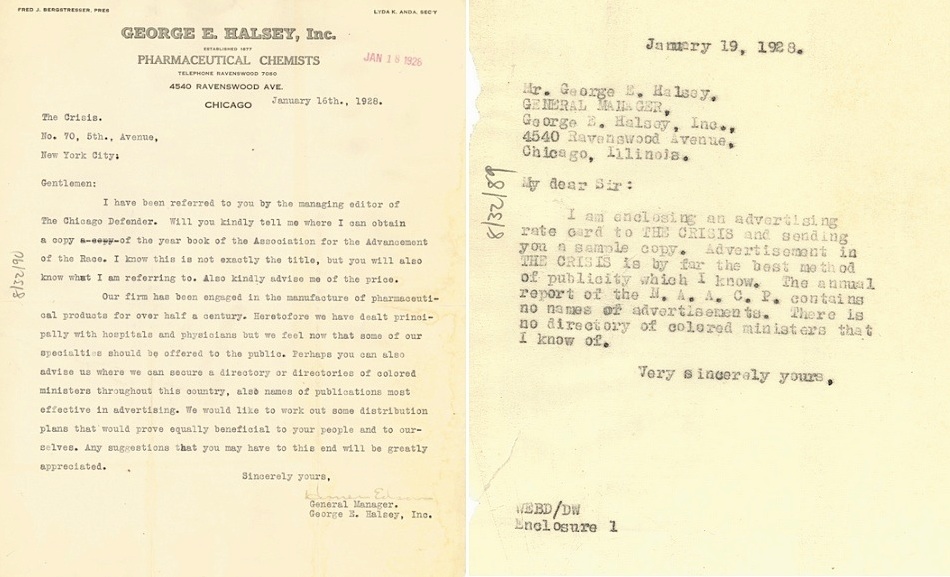 We’re estimating that our amber bottles were made in the first decade of the 20th century, after the Tappen-George split, but they could easily date back further to the earlier, halcyon Halsey days of the 1870s and ‘80s.

We’ll conclude things now with a brief look at medical advice from Halsey’s Homeopathic Guide—which was published by Clinton and George in 1885, just months before Clinton’s death. Notice how the publishers are identified as “C.S. & Geo. E. Halsey (NOT Halsey Brothers).” Ha! 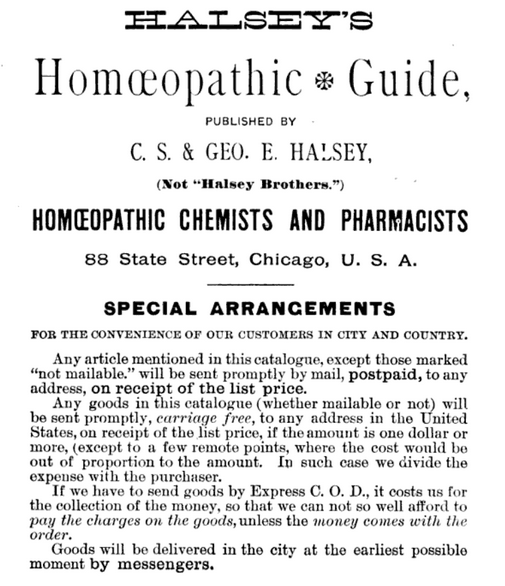 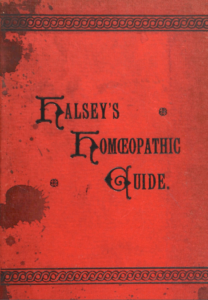 It will be noticed by the readers of the following pages that in our recommendation of remedies for the cure of disease, we do not hesitate to mention especially those of our own manufacture or those we are personally interested in. If any apology is needed for this, it may be found in the fact that our business is the manufacture and sale of such goods, and that we depend upon it for a livelihood. We are careful not to recommend any remedies or any treatment without knowing that we are right in so doing, and careful not to offer for sale any article of our own or other manufacture which cannot be relied upon.

While we are grateful to our patrons of the present day and of the past thirty years for the kind appreciation they have shown of our goods and publications, we cannot but feel a sort of pride, which indeed is the right of every honest tradesman, that in offering and exchanging our commodities for their money, the advantage of the exchange is not all on one side. Our reputation as homoeopathic pharmaceutists and publishers is well known throughout the United States, and to some extent in other countries, so that as a rule one need not go far to ascertain that our publications and preparations can be depended upon.

MALARIA
What it is no one seems to know. What we do know is that in certain localities and at certain times, there lurks in the atmosphere a poisonous influence which affects certain individuals, taking away strength, appetite, ambition, courage, and throwing the whole system into disorder… If you are so exposed and feel the depressing, disheartening, discouraging influence for which you can not account in any other way, it is time to take Napiform Tonic, or change your residence.

… If you have allowed the poisonous influence to continue unchecked until chills and fever are settled upon you, Halsey’s Antidote to Malaria will help you out of the trouble, and the sooner the better. The Antidote is also a sure preventive of the evil effects of malarial poison, and as such it is invaluable to travelers in malarial districts and to others exposed temporarily to malarial influences. The Antidote is widely known and extensively used among physicians. Its reputation is not confined to this country. A letter from Bangkok, Siam, dated March 25, 1885, reads: “The malarial pills have been of great value. We have had plenty of use for them and I have longed for another supply.”

SNAKE BITES
…For the bite of the rattlesnake, the common treatment is to drink whiskey until intoxication is produced. It is said to be effective against the snake poison, but as some whiskey is almost as poisonous as the average rattlesnake, and as it is as easy to have Ammonia at hand as the whiskey, we prefer the Ammonia treatment.

VACCINATION
If not convenient to have a physician perform the operation, procure a package of pure cow pox virus from some homeopathic pharmacy, and with a sharp knife, point scratch a space about half an inch square just sufficient to remove the outside skin and not cause profuse bleeding. Then moisten one of the vaccine points a little and rub the virus into the abrasion. Let it dry five minutes. 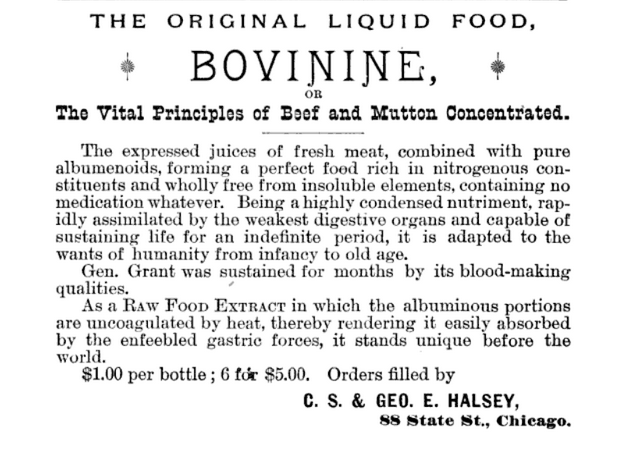 CHOLERA
In the first place don’t be afraid of it. It is not contagious. It usually attacks only those whose blood and tissues are depraved by beer drinking or whose constitutions are weakened by habitual use of wine, whisky, or other such stimulants.

…If you have at hand a small case of the proper homoeopathic remedies, and so are able to take the right remedy promptly, you are not likely to die of cholera if it does attack you. If from any unavoidable cause your nervous system is in a depressed condition, Napiform Tonic will soon restore the lost tone. If you suspect that the atmosphere of your sitting room or sleeping room is not pure, a good Ozone Generator will make it free from all disease germs. It is asserted by our best scientists that cholera cannot exist where the atmosphere contains Ozone. If attacked by cholera, do not trust to any of the advertised “cholera medicines,” most of which are compounds of Opium and irritating stimulants like Cayenne and brandy. If the attack is cholera, they do more harm than good.

CANCER
It is doubtful if there is any sure cure for true cancer when established in the system except by using the knife, and even that is not certain. Mr Needham’s Red Clover Tea and Red Clover Extract have a great reputation in the treatment of cancer and diseases of a similar nature. Red Clover Oil is excellent as a daily dressing for open cancer. Arsenicum is an exceedingly valuable remedy in case of cancer, relieving the burning pain, removing the prostration of the system, and sometimes even dissipating the poison of the disease. Recently cures of cancer by the use of Compound Oxygen treatment have been reported, but although we can see no reason why it should not cure cancer as well as other forms of blood poisoning, we don’t know that it will.

THE BLUES
No one can afford to be blue or low spirited, partly because he cannot keep well unless he keeps cheerful and partly because he cannot help to make the rest of the world happy unless he is somewhat so, himself. People subject to “the hypo” are very apt to be misunderstood by others, and are very likely not to understand themselves very well; and often a good deal of mental and spiritual distress is the result of our not being aware of the fact, or not considering the fact, that a sudden attack of “the blues” or “the sulks,” when all the surroundings are just as prosperous and cheering as previously; or a readiness to be thrown off the balance, and made to feel “out of sorts” by some trifling “unpleasantness,” indicates having taken cold, or weak digestion, or inactive liver, or over weariness, or reaction from over excitement and dissipation, or from the stimulating effects of tea, coffee, or alcoholic drinks. In such cases, rest, sleep, or the proper medicines (Byronia 3, Nux vomica 3, China 6, Podophyllin 3x) will make one cheerful and happy again; that is, if he had good reason to be cheerful and happy before.

Of course, this was before Chicago became the home of The Blues, so we’ll forgive the Halseys for foolishly seeking to cure it.

Meanwhile, for Woody Harrelson and other fans of medical cannabis, know that you had a friend in the Halsey Bros., as a company catalog from back in 1914 recommends the drug to treat several ailments, including insomnia. 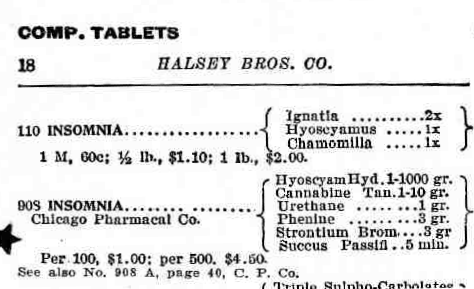 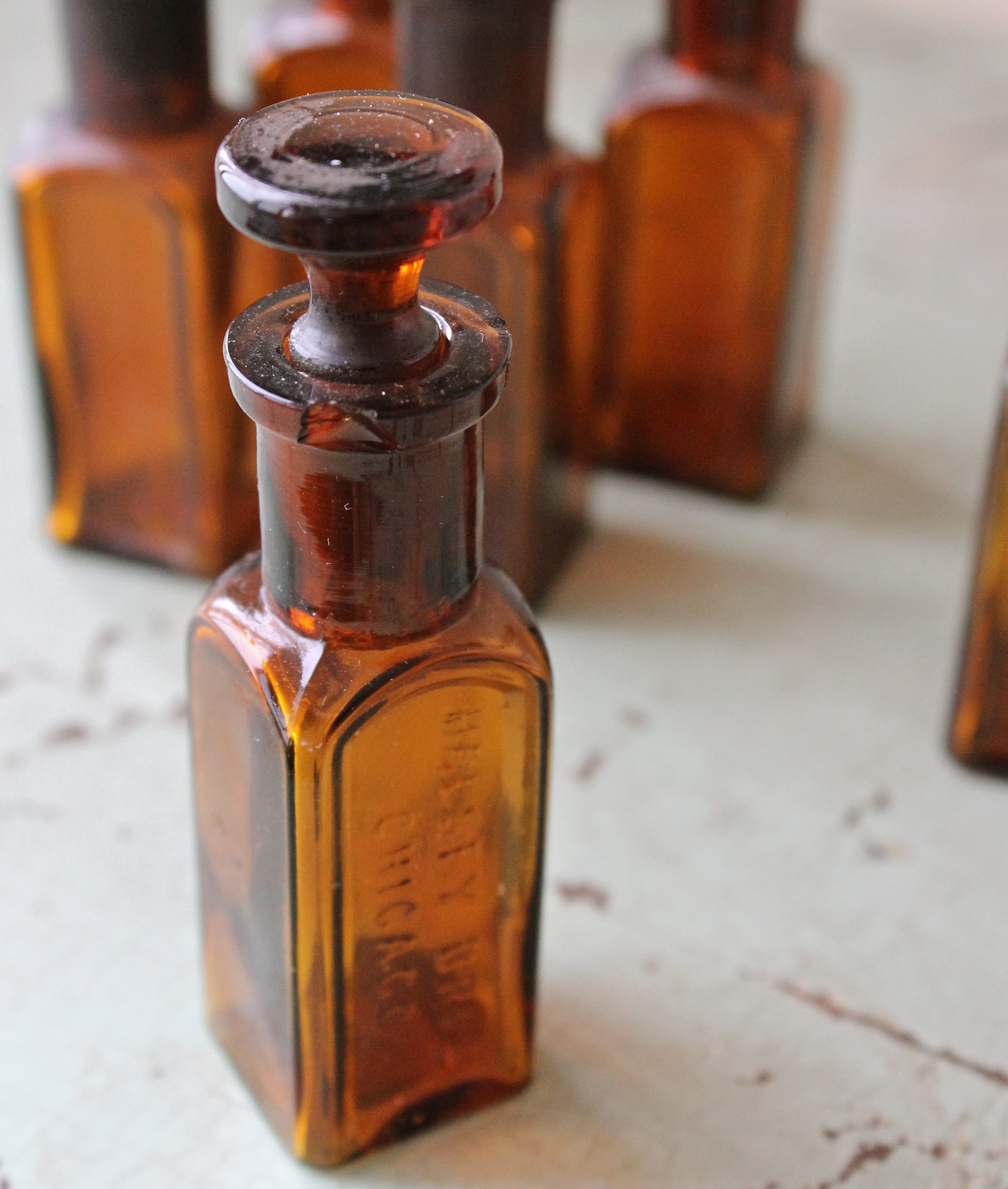 Homeopathic Bibliography of the United States, 1892