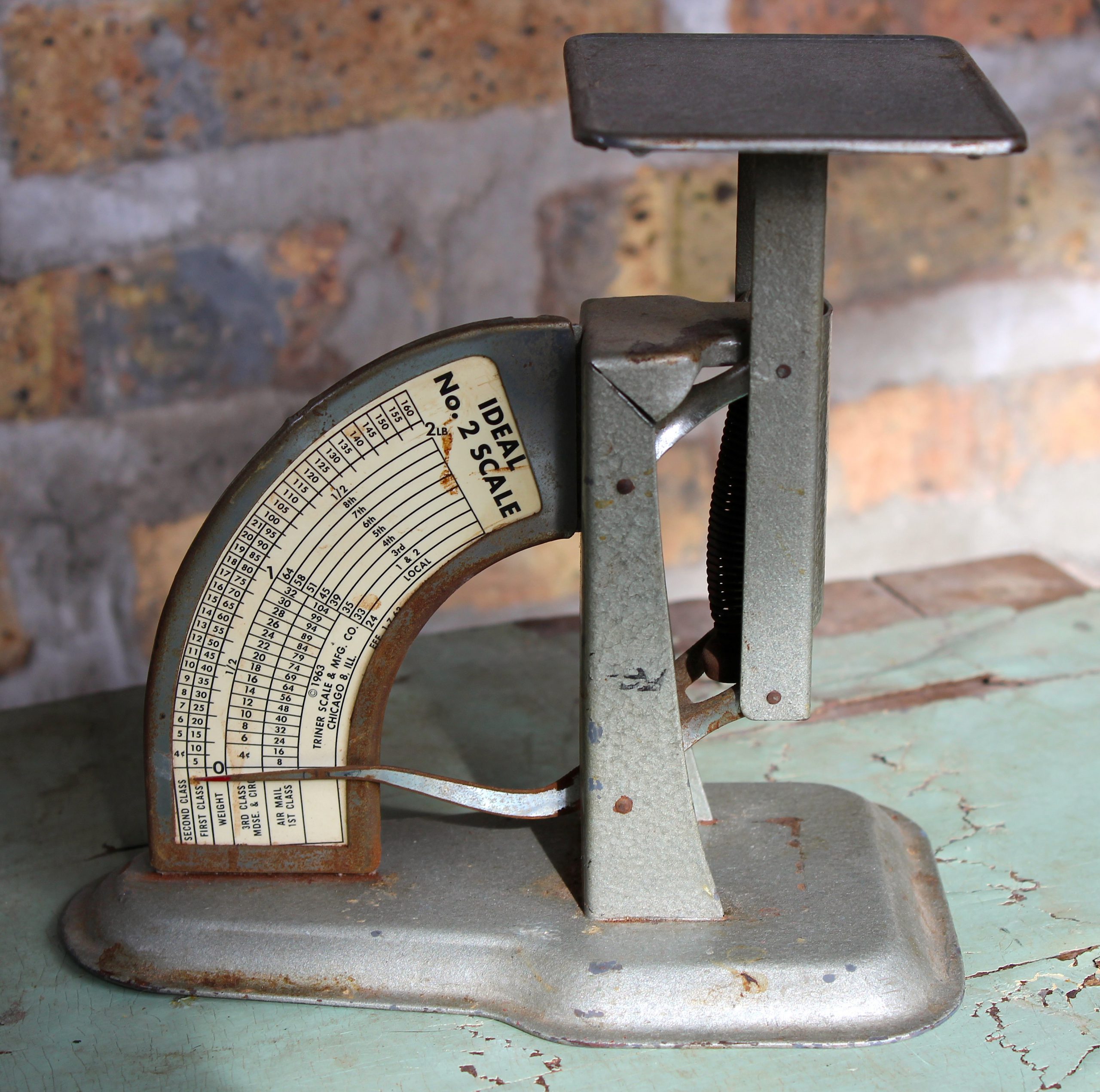 Triner Scale & MFG Co., 2714 W. 21st St., Chicago, IL [Little Village]
—
This curvaceous postal scale from the Triner Scale & MFG Co. has a copyright of 1963 on the dial, but it doesn’t necessarily mean the scale itself was built that year. By the mid-century, Triner was equipping its “Ideal” and “Superior” U.S. mail scales with replaceable plastic dials. That way, when the government decided to go nuts and increase postal rates, a person could merely send away for a new dial rather than an entirely new device. This was slightly before the electronification of weights and measures made the whole conversation moot.

[For a full in-depth history of the Triner Scale Company and its founder James Triner, see our main Triner page. For more on the Ideal No. 2 scale, continue below] 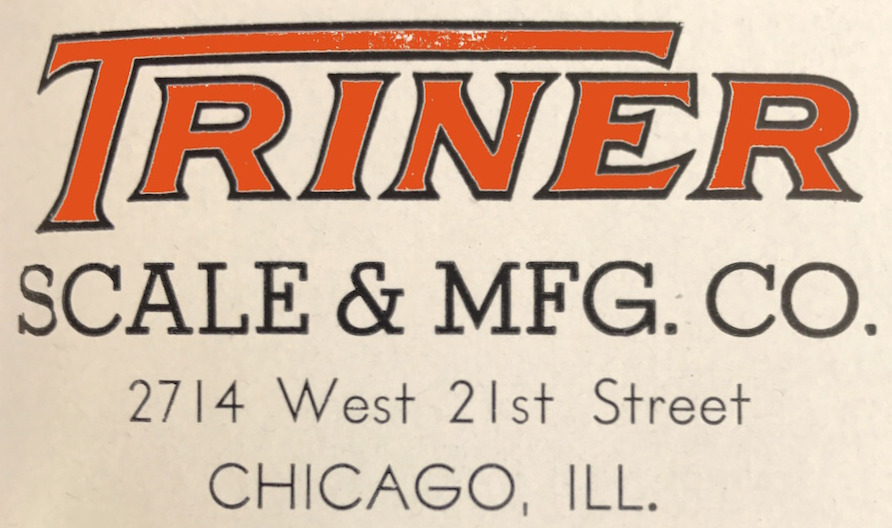 After a major rate hike in 1958, for example, the Tribune reported that the Triner Scale & MFG Co. was being “deluged with new orders.” The company president at the time, Theodore T. Jansey, said that “38,000 post offices throughout the country” had requested new scales, and that there were “more than a half million” additional Triner scales already in use that would require new charts with the updated rates.

Clearly, in the old snail-mail scale business, you had to stay on your toes. Otherwise, yesterday’s laser-accurate weigh-in could be tomorrow’s costly shipping screw-up.

When it came to the actual design and mechanics of Triner scales, however, there was considerably less evolution going on. Looking at the two ads below featuring “Ideal” mail scales, you’ll notice that the first, from 1908, looks basically the same as the second, dating from 1956. 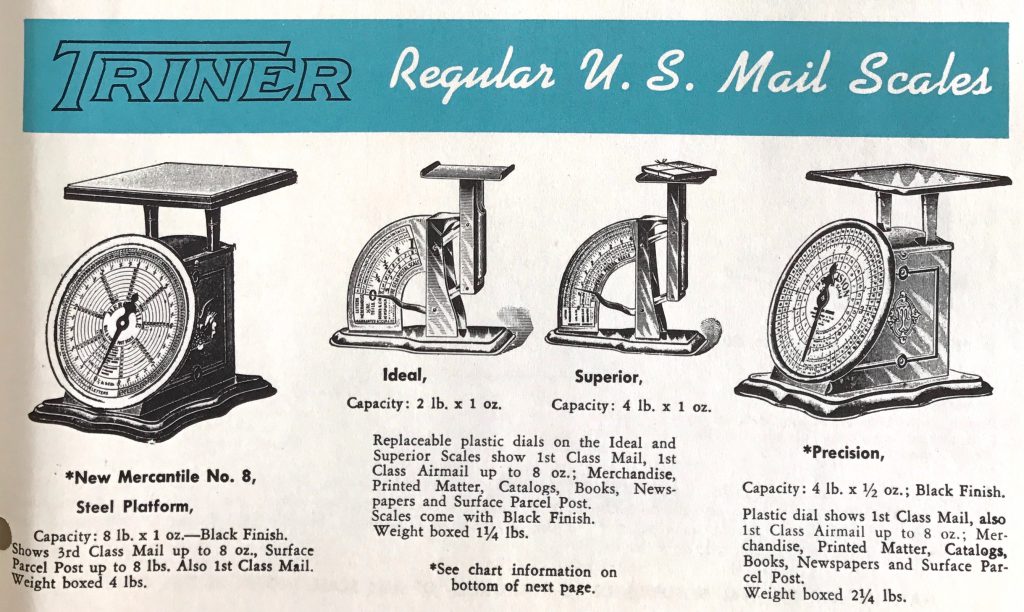 It’s quite the testament to the quality of company founder James M. Triner’s original schematics that his company barely deviated from those designs even decades after his passing in 1939. The 1908, 1956, and 1963 Ideal scales are all based on a 1904 patent in which Mr. Triner introduced “certain new and useful improvements in weighing scales.”

The main goal, he wrote, was “to provide means whereby the weight or material to be weighed may be supported by any one of a plurality of different resistances, or, in other words, by any one of of a plurality of resistance members capable of sustaining different degrees of stress or tension for supporting the weight whereby the resistance member having the lesser degree of resistance may be utilized for weighing light objects, such as mail matter, and resistance member having the greater degree of resistance may be utilized for weighing heavier objects or material, thus greatly increasing the weighing capacity of the scale without increasing the range of movement of the index or pointer. . . Another object of my invention is to improve and simplify the construction of the scale-frame and mechanism whereby its cost of manufacture may be considerably reduced and its operation rendered more efficient.” –James M. Triner 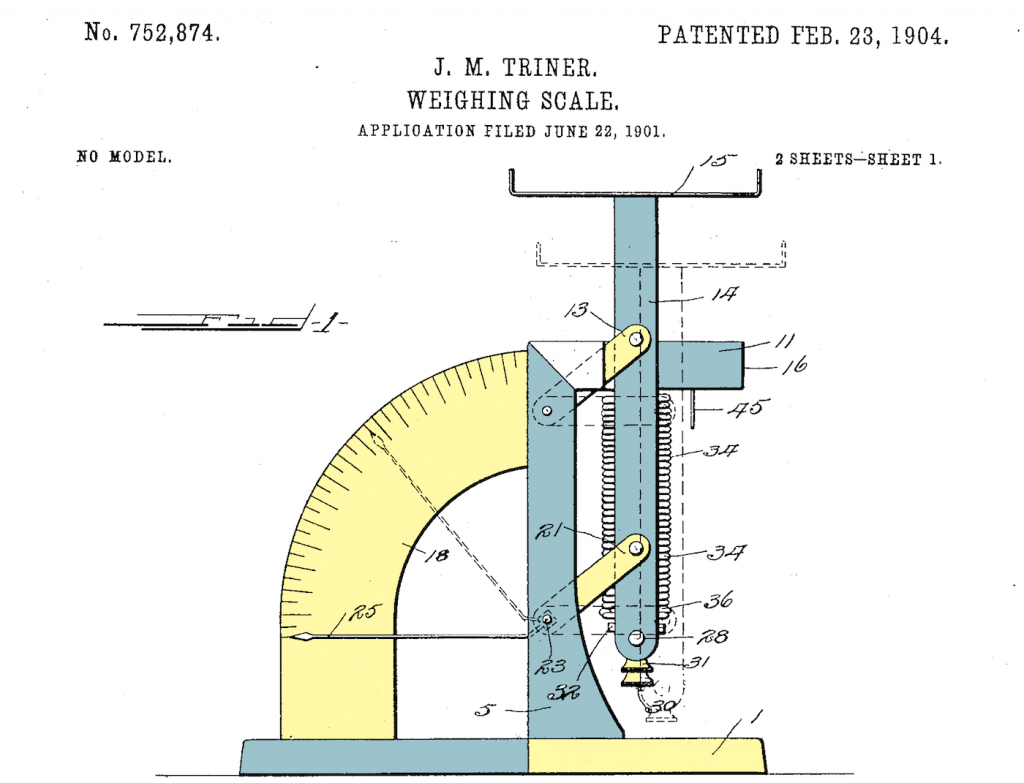 To put it simply, the Ideal Scale (along with its cousins the “Gem” and “Superior”) was a super lightweight, easy-to-use tool that helped people avoid over-spending on postage. The simple spring scale could effectively compute the correct 1st Class, 2nd Class, 3rd Class, or 1st Class Air-Mail postage cost for your everyday letters, books, magazines, merchandise, etc. up to 2 LBS.
In 1963, the domestic postal rate had just kicked up from 4 cents per oz. to 5 cents. So the owner of the scale in our collection might have purchased either the scale or dial in ’63 to adjust to the new rules. 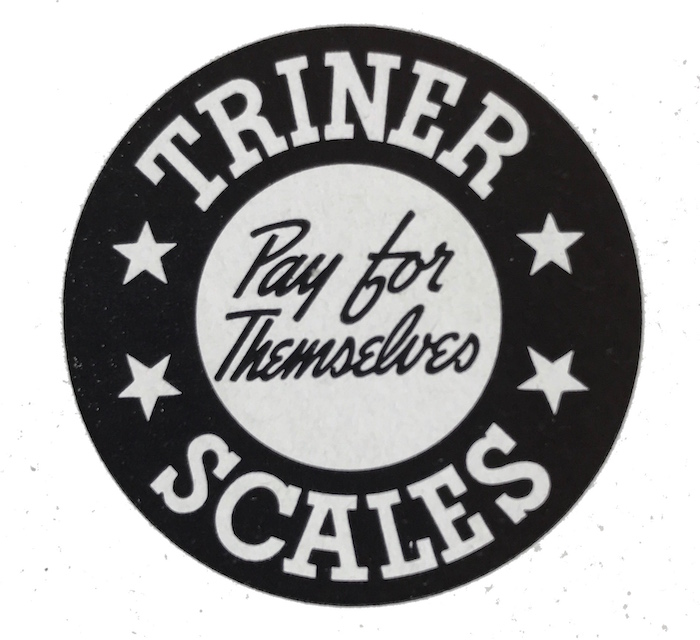 As the official postal scale of the United State Post Office, Triner would (and still does) play both sides of the industry in a way. One one hand, the company touted its reliability to the government as a way to make sure the public paid what they owe to ship items. On the other hand, Triner also promoted its products heavily to the private sector, showing businesses how much money they waste by not handling their mail properly.

“Mail users, and especially Parcel Post users, donate more than a million dollars—EVERY YEAR—to the U.S. Post Office Department by using excess postage because of inaccurate scales,” a 1956 Triner promo sheet read. By contrast, of course, “Triner scales have a reputation for quickly paying for themselves through time and postage saving. If your mail clerk uses a Triner Scale, he has full confidence in its Post Office Accuracy. It does away with the tendency to waste extra postage.” 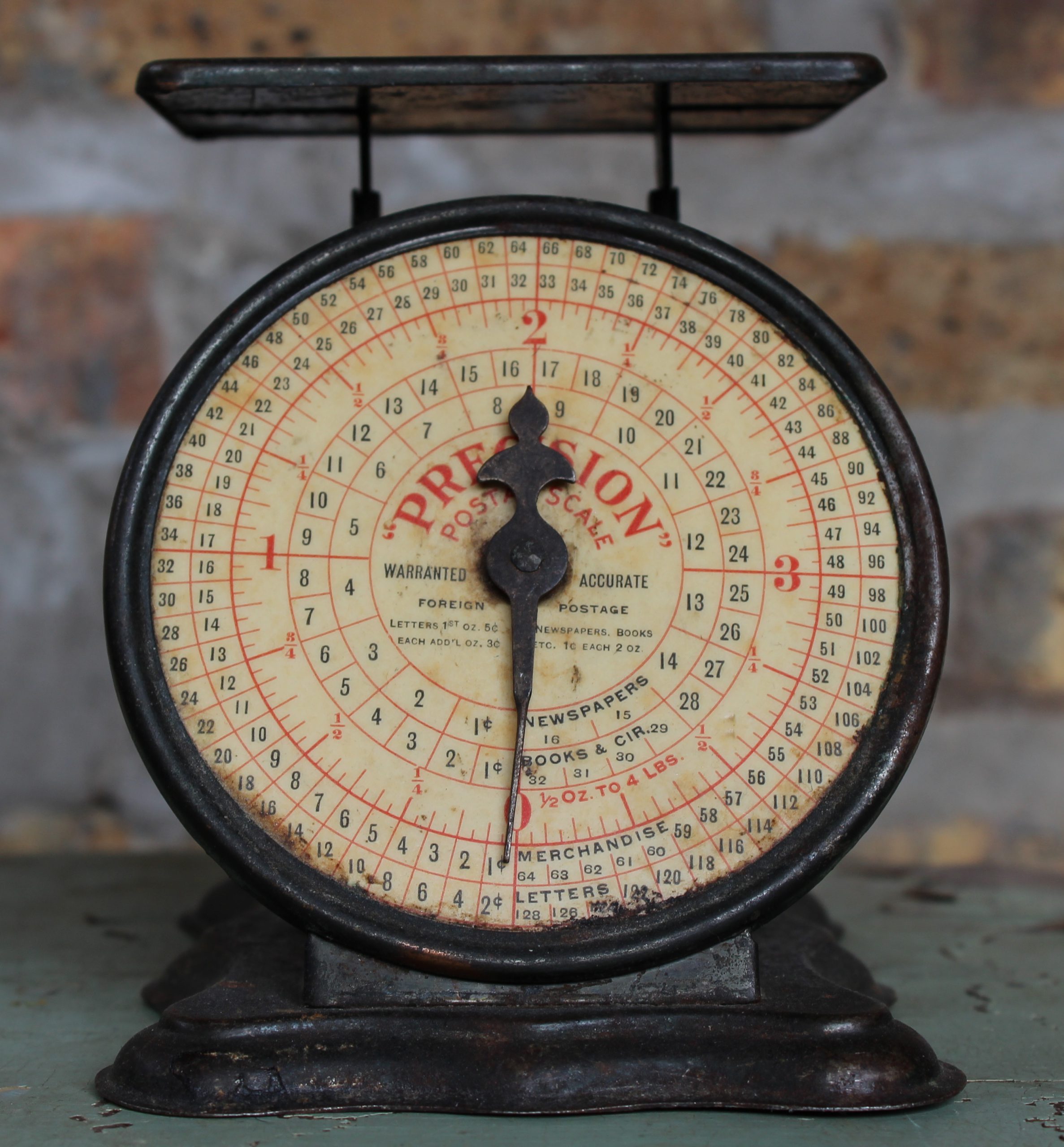 The Triner Scale & Manufacturing Company was founded in Chicago in 1903 and remains in business today, though the longtime factory at 2714 W. 21st Street was abandoned in the ’90s when the company relocated to Memphis.

To get a more complete history on Triner’s early Chicago days and the saga of its mastermind, the Czech immigrant James Triner, check out our main Triner Scale Co. page, featuring another artifact from our collection: a Triner “Precision” Postal Scale, circa 1910. 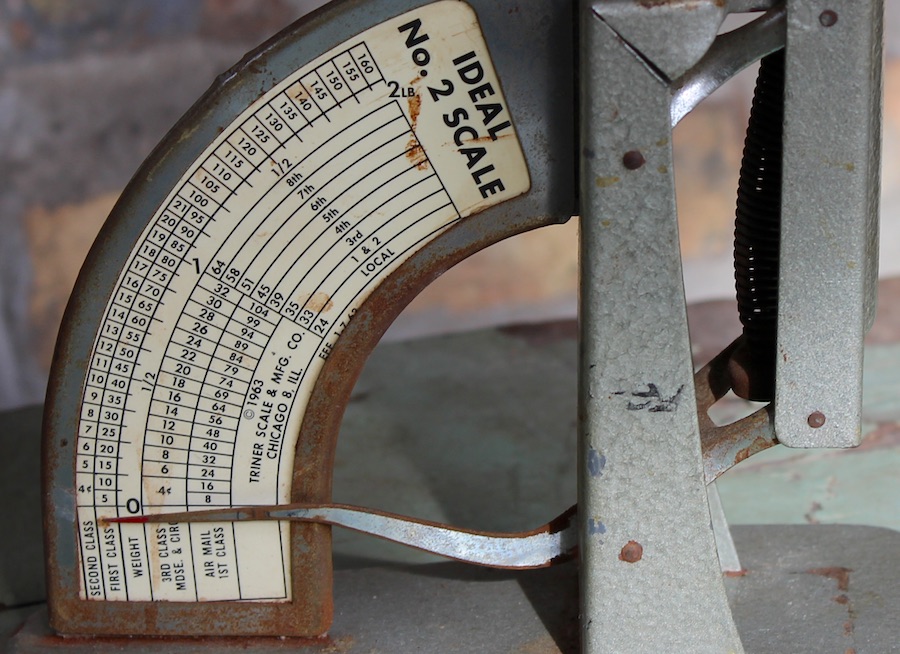 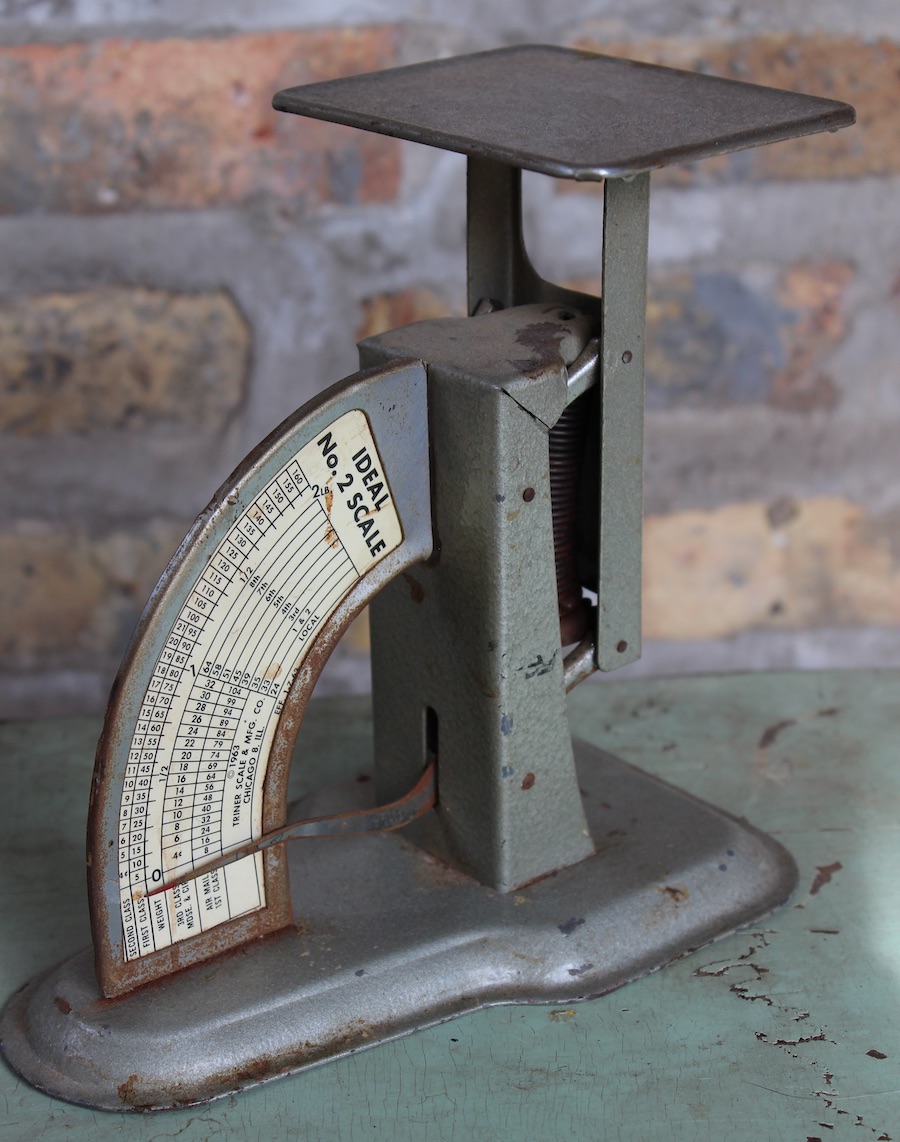 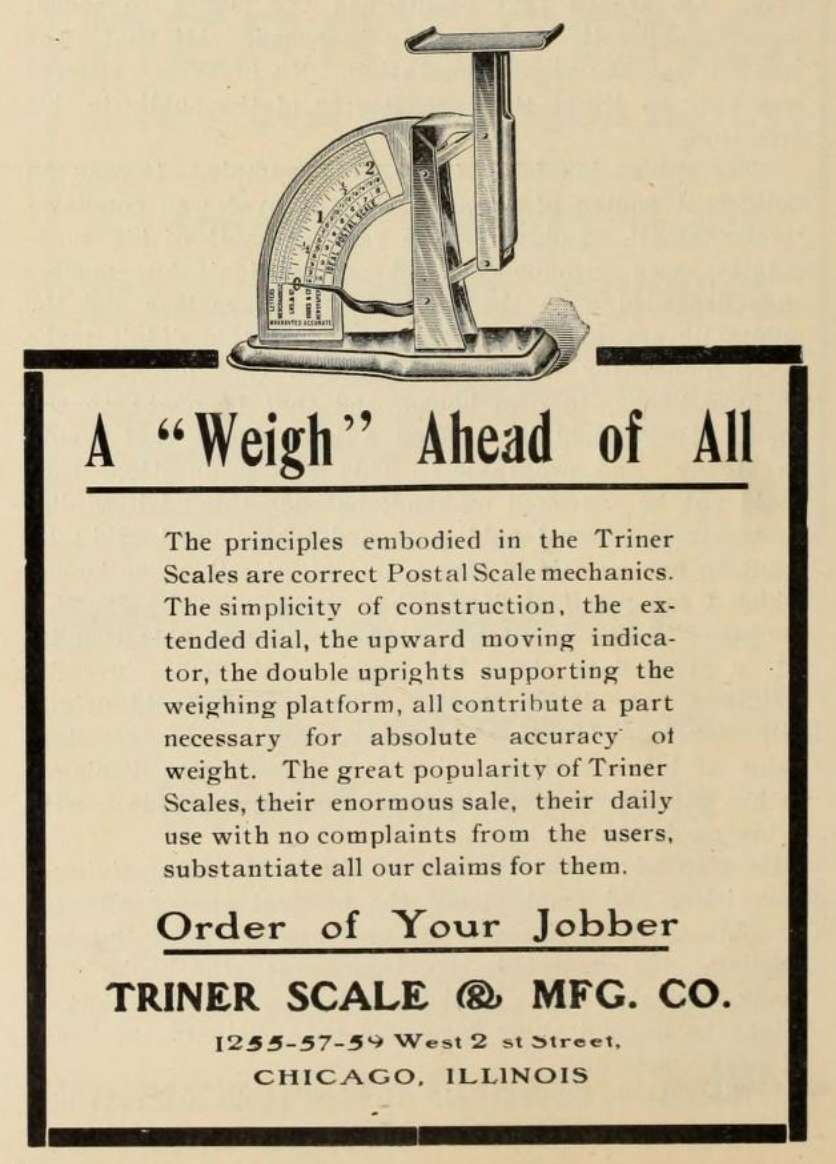 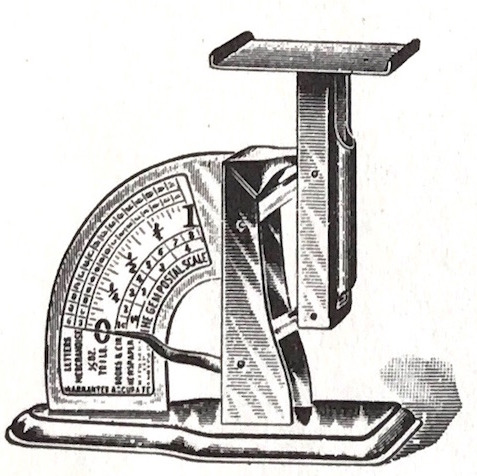 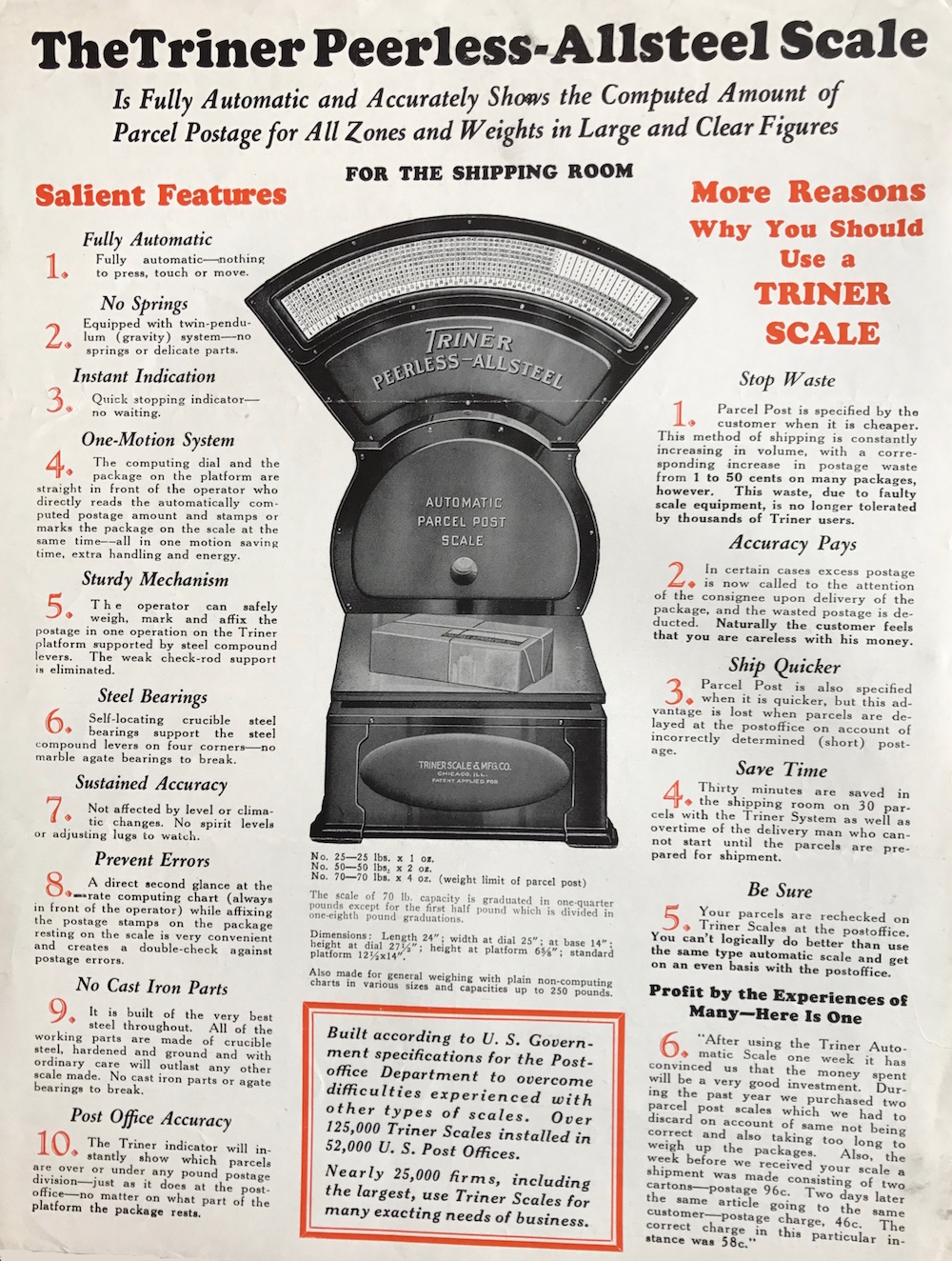 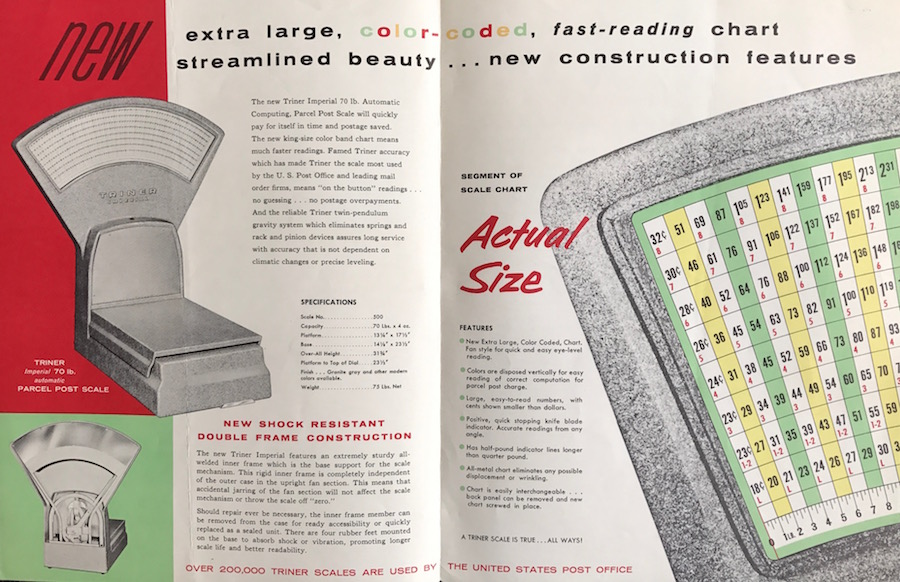 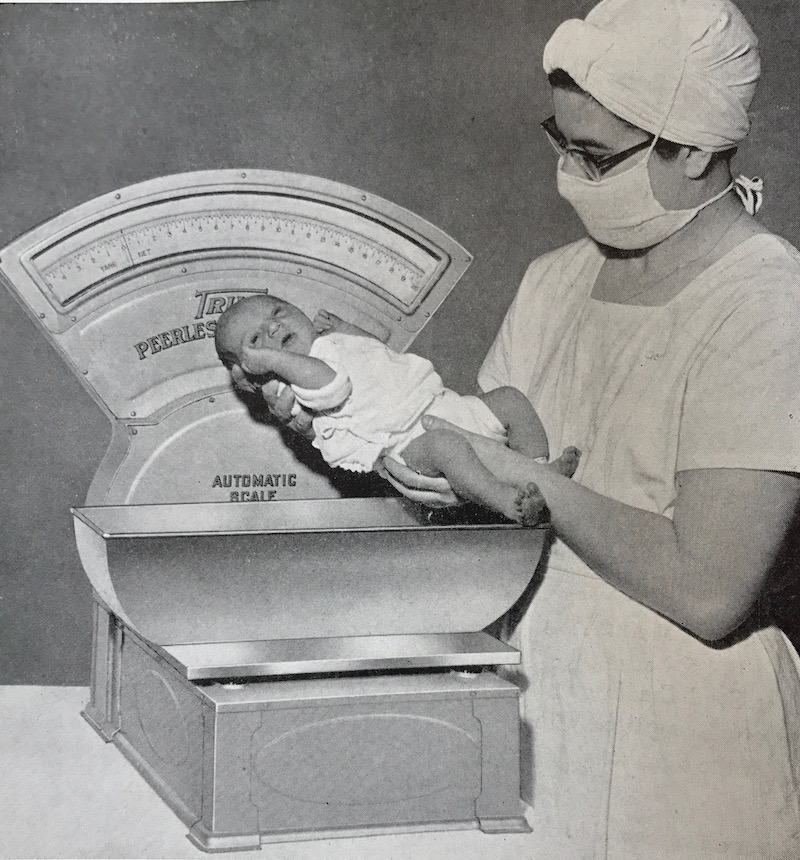