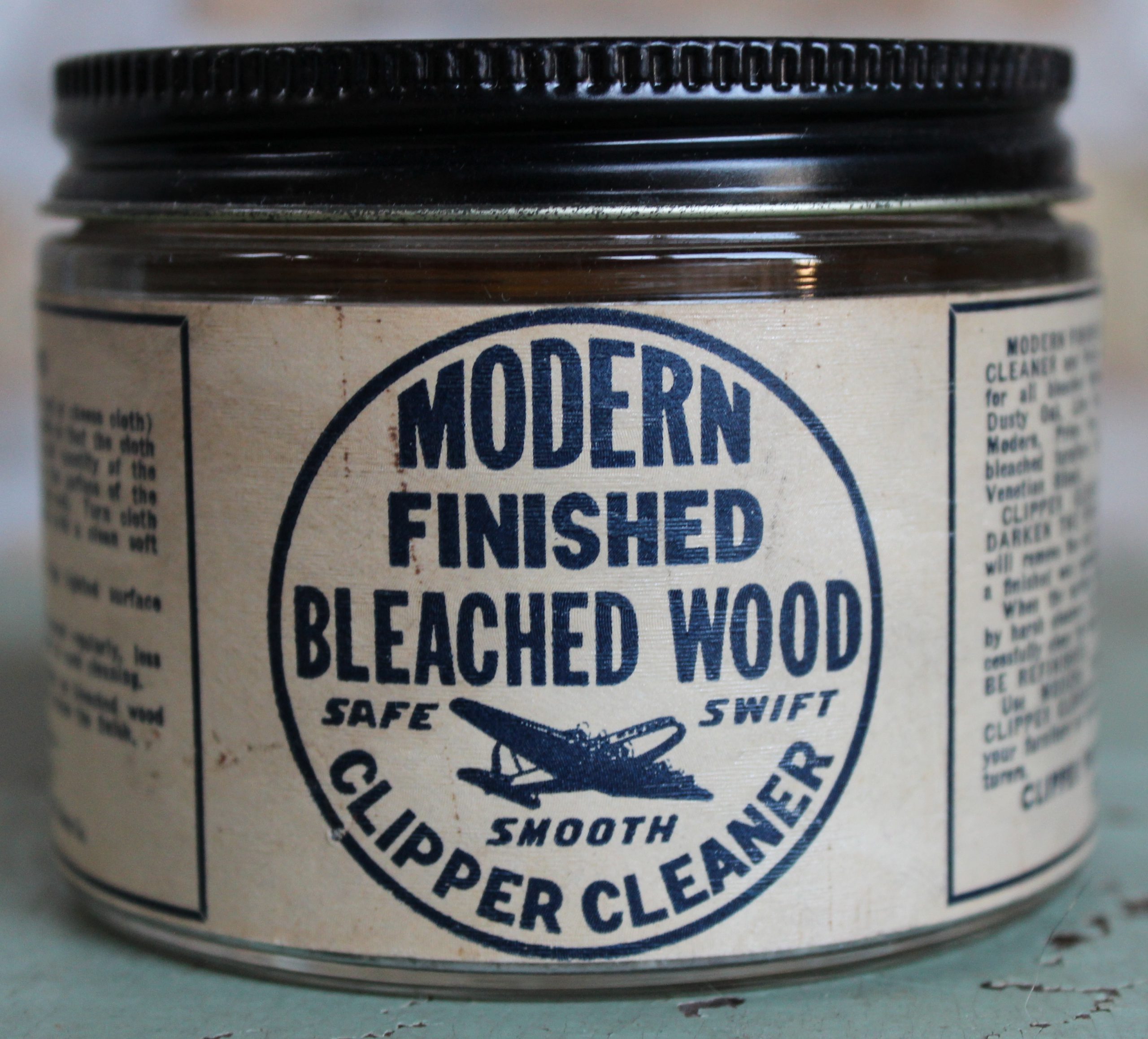 Who was A. Maxwell Brown? If you can solve that riddle, you might be one step closer to piecing together the story of Clipper Products—one of the more obscure and mysterious companies included in the Made-in-Chicago Museum.

Fittingly, our introduction to the Clipper brand took place in a quiet corner of a dark basement in Albany Park. It was an estate sale, and pickings were slim. While most items of interest had been nicely tagged and displayed in high traffic areas of the small house, curious explorers were welcome to dig through the various “other things” lurking in the shadows. This 1/2 pint jar of “Clipper Cleaner,” unassuming as it might be, actually caught my eye pretty quickly—sitting on a dusty metal shelf with other more recognizable cleaning products and laundry detergents. The little fella looked a little out of place with its logo of a World War II era Boeing Clipper plane. 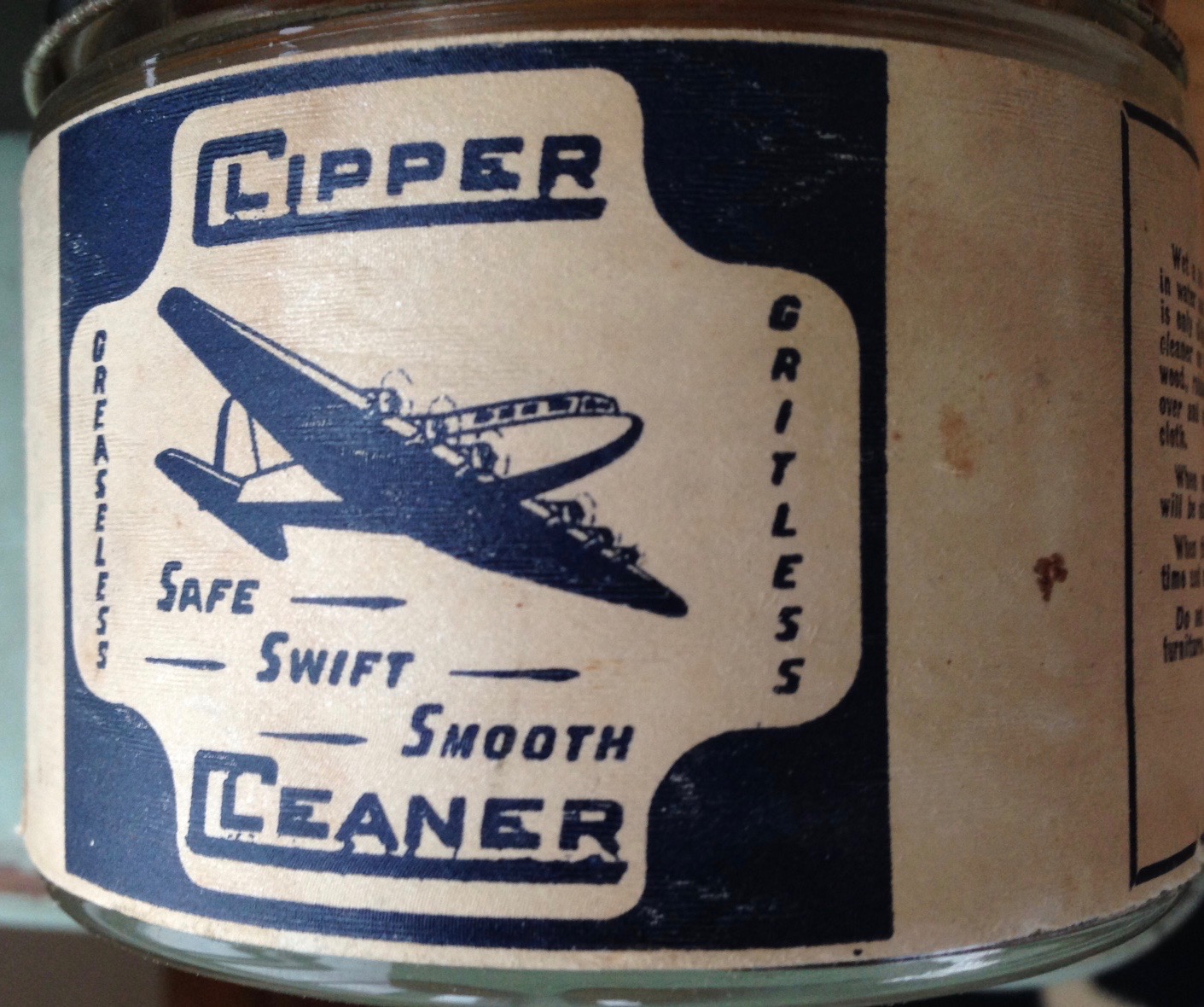 Sure enough, the label dates the product to 1940, making it not at all improbable that this jar was sitting in roughly that same spot for the better part of 75 years. Stranger still, it contained a sort of fossilized version of whatever cleaning compound once resided inside it. I haven’t actually touched nor taken a whiff of this substance, fearing for my own life, but if I had to bet, it would have the general texture and scent of a clinically depressed pine cone.

Now, you might presume that a person would have plenty of opportunities to polish their bleach-finished furniture over a full human lifetime, but in this case, it looks like the former resident of this house either never found the time or, perhaps, found a superior product for doing so. If the former explanation is correct, the story takes on a bit of a sad undercurrent, as one envisions a person looking at the jar sporadically, over the course of decades, and saying to themselves, “eh, I will get around to using that stuff eventually.”

As the label says, Modern Finished Bleached Wood Clipper Cleaner & Polish was a “highly specialized product for all bleached finishes such as Platinum, Blond, Dusty Oak, Lime Oak, Swedish Modern, American Modern, Prima Vera, Toasted Mahogany, and all bleached furniture, wall paneling, metal and wood Venetian blinds. CLIPPER CLEANER and Polish WILL NOT darken the finish as oil polishes do, but will remove the soil and when polished, the wood has a finished wax appearance. …Use MODERN FINISHED BLEACHED WOOD CLIPPER CLEANER and keep the original finish on your furniture as produced by the furniture manufacturers.” —CLIPPER PRODUCTS SALES CO., Chicago. 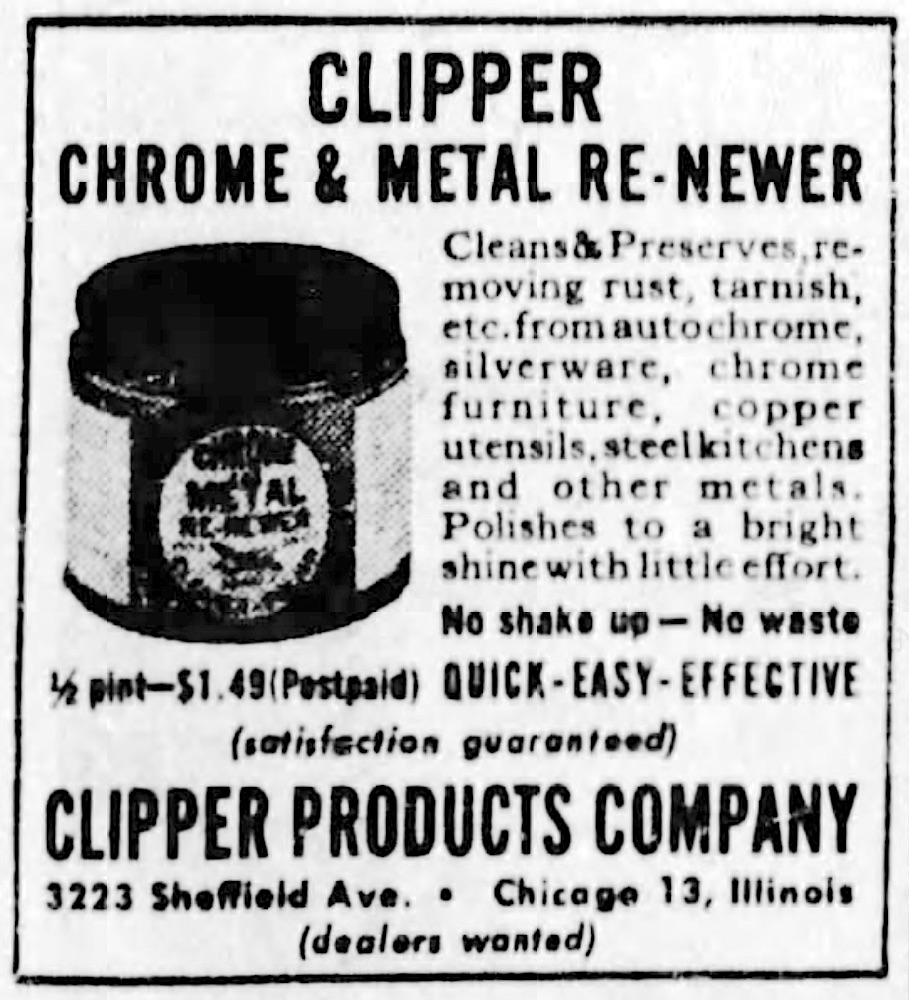 Sounds pretty official, and sure enough, we can at least confirm that Clipper was a real Chicago company, operating from at the least the late 1930s into the late 1950s—a pretty good run. It also appears that the company was headquartered in the same location during that entire span: 3223 N. Sheffield Avenue in Lakeview. That address is now home to a pretty generic, modern apartment building, so the scope of the original factory or warehouse is hard to guess at.

In the 1950s, Clipper Products Co. branched out into more types of cleaning products. The newspaper ad from above, dated to 1954, reveals a similar can to our Clipper Cleaner, but containing “Clipper Chrome & Metal Re-Newer” rather than wood polish. Shortly thereafter, a September 1955 issue of Billboard published the clip below, hyping another as-yet-unnamed Clipper cleaning product in the same type of half-pint jar. This was a “new compounded preparation that cleans and preserves all leathers, leatherettes, and plastics.” We theorize that this product was later marketed as “Alleather,” but the fact we’re unsure speaks to its permanent obscurity. 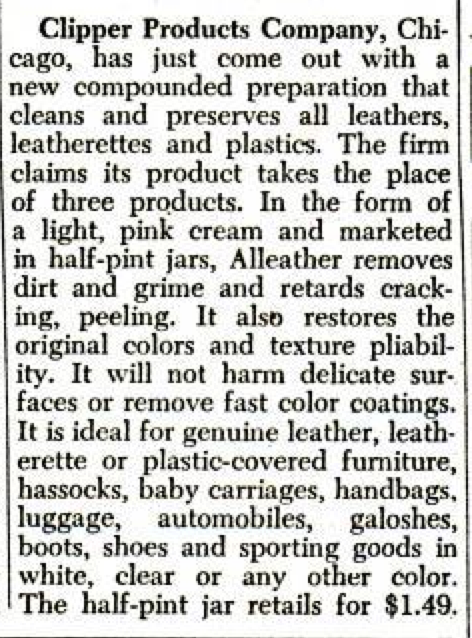 A 1956 Catalog of Copyright Entries does mention “Alleather” and an “Allmetal re-newer, cleaner, polisher” as officially registered properties of the Clipper Products Co. Both copyrights are also credited to a guy named A. Maxwell Brown, “d.b.a Clipper Products Co.” 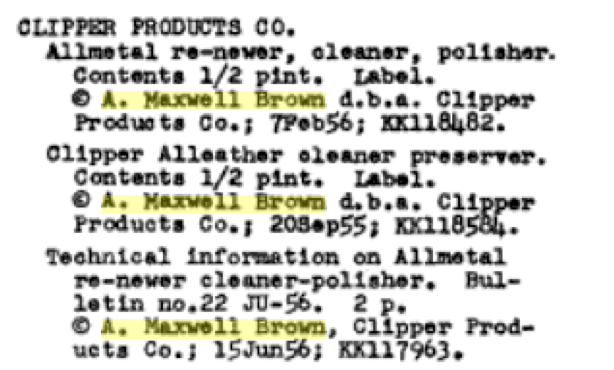 If this Max Brown person was “doing business as” Clipper Products, it suggests that he wasn’t just a creative force in the company, but likely its president / founder / supreme leader. Unfortunately, tracking down more information on A. Maxwell Brown or his days in Wrigleyville has proven challenging.

Where did Brown come from? What inspired his obsession with cleanliness and half-pint jars? Was there a Clipper Cleaner jar at that estate sale because… it had been A. Maxwell Brown’s house?! No, almost certainly not. That’s ridiculous. But when information is this hard to come by, the one advantage as a researcher is that it gives you free rein to just make wild claims with no substantiation whatsoever. History is fun!

If you actually want to rain on my parade by providing actual, concrete information about Max Brown, Clipper Products, or how wood polishes worked in the 1940s, leave a comment below. 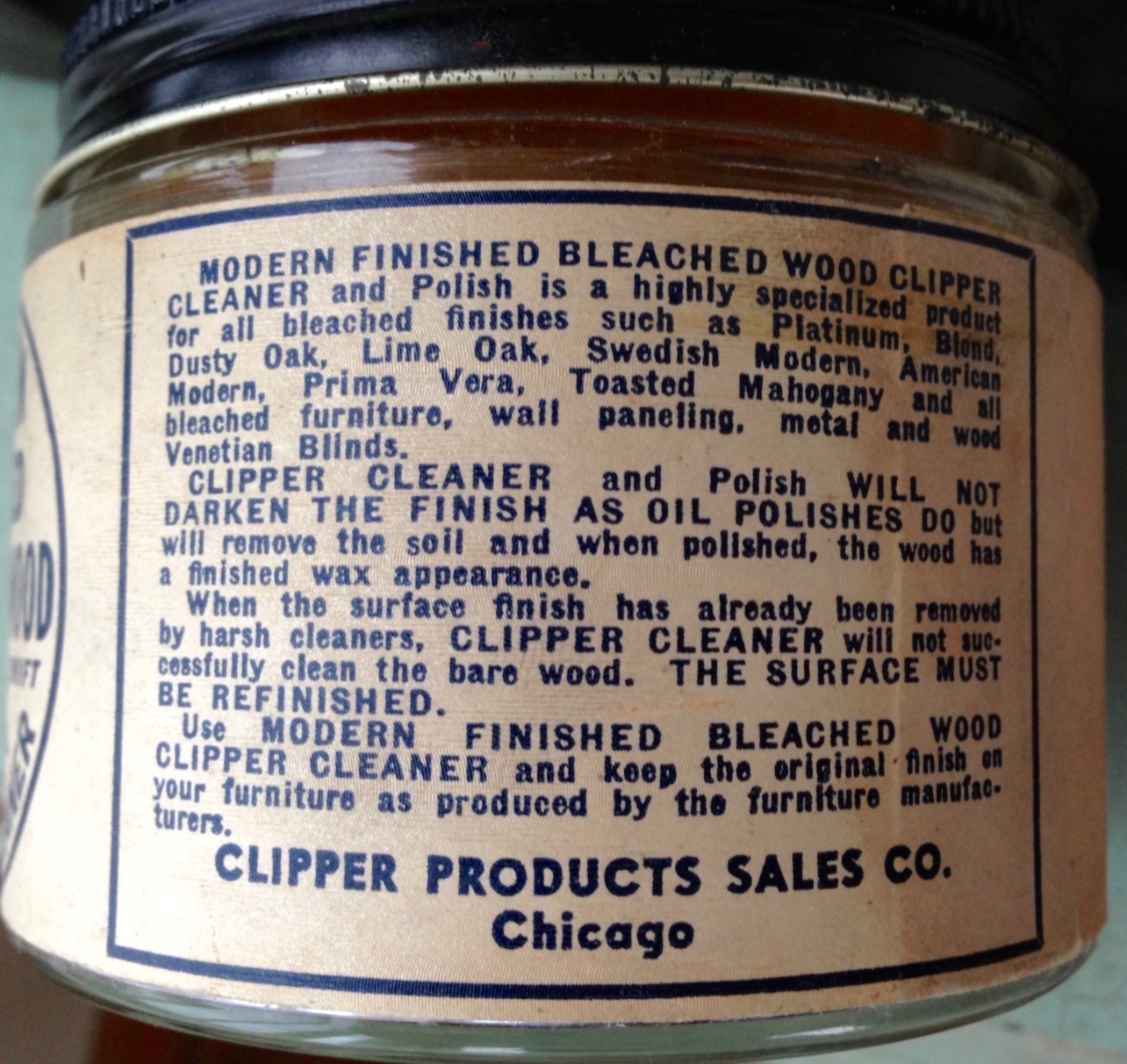 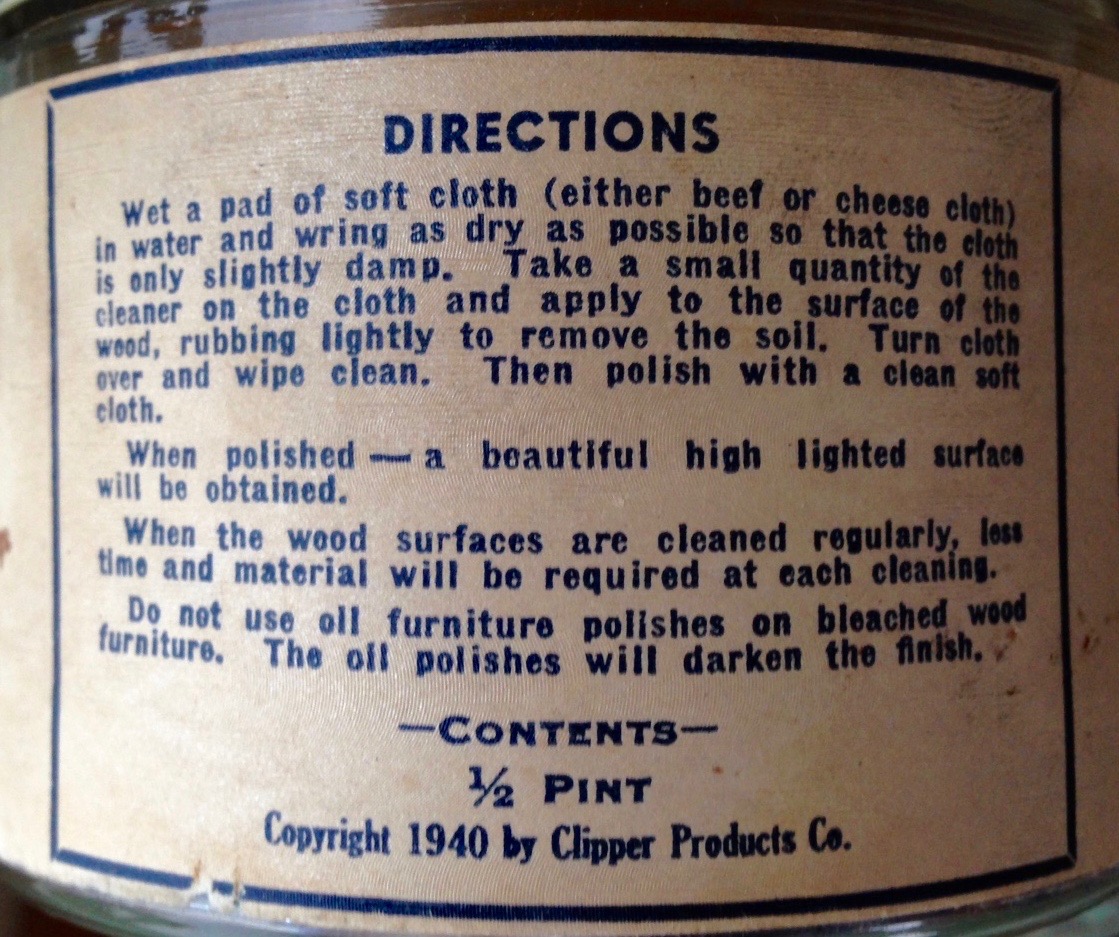