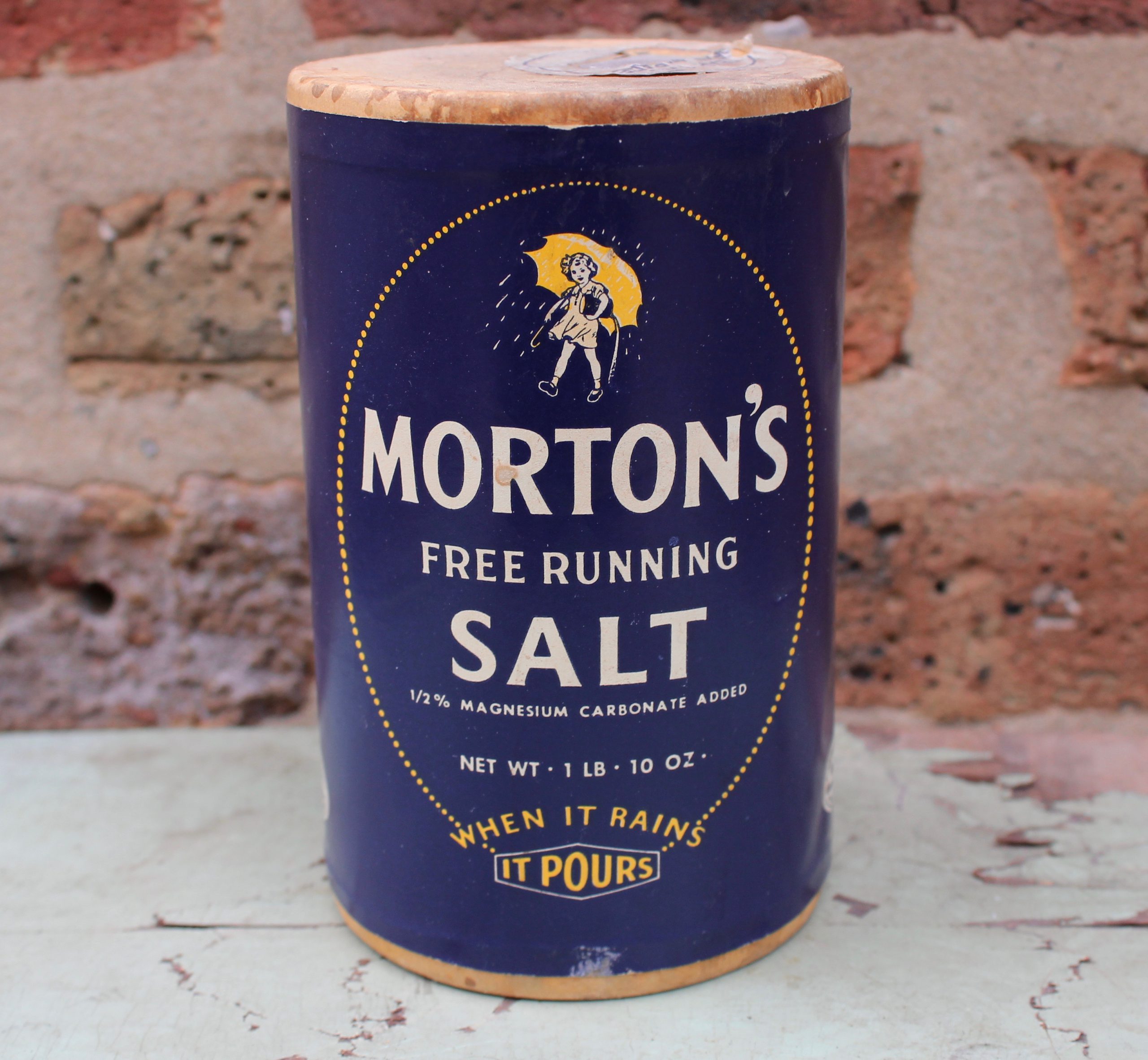 Iconic mascot though she may be, the Morton Salt Girl has actually gone through at least six distinct incarnations since making her first appearance in a series of Good Housekeeping advertisements in 1914. While the original girl wasn’t based on anyone in particular, Girl No. 3—as seen on our Depression-era Morton container—clearly gives a nod to the biggest little movie star on the planet at the time, Shirley Temple. The curly hair wasn’t an entirely new twist, however—the very first Morton Girl had sported a similar look 20 years earlier. 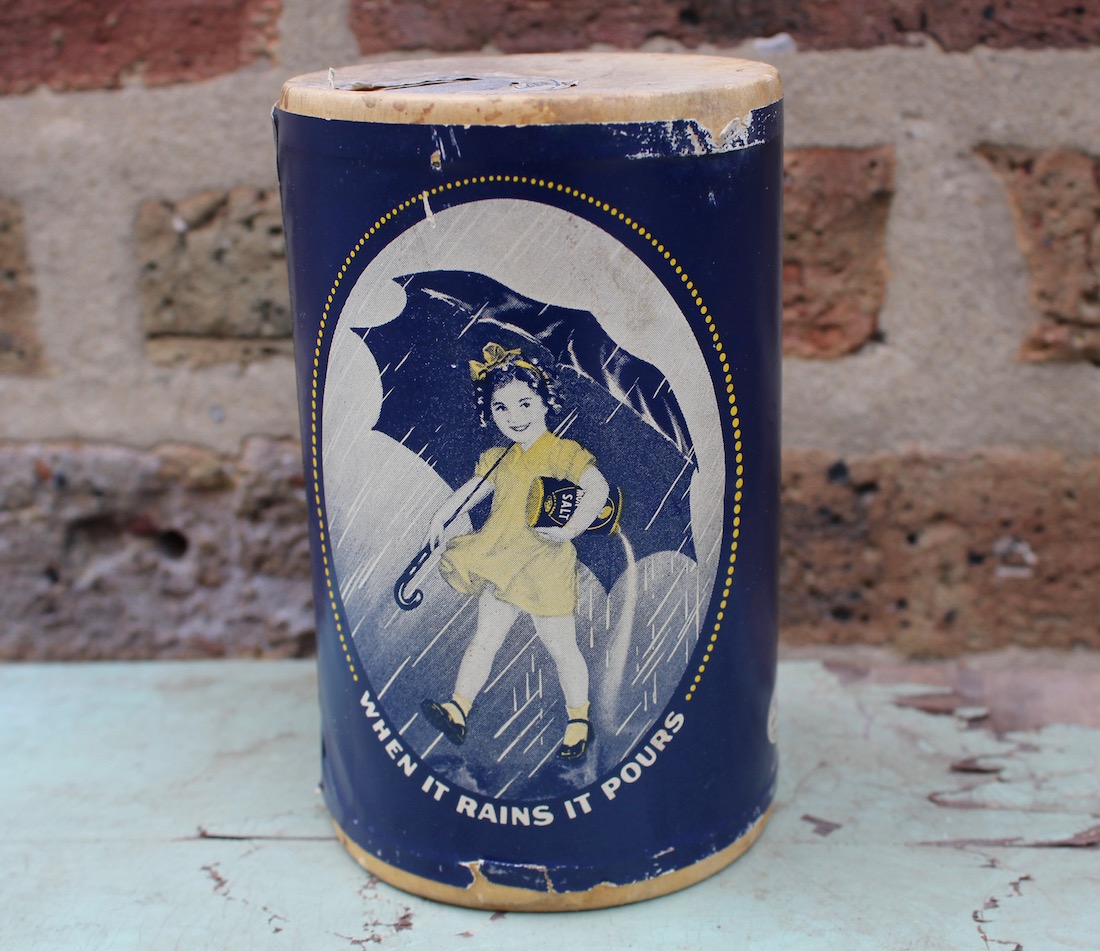 Honestly, by the 1930s, Morton Salt could have turned the umbrella-wielding lass into an orangutan and it wouldn’t have dented their reputation. The company was already the largest single salt producer in the country, and its pun-tastic “When it Rains, It Pours” slogan had slipped into the everyday American lexicon. Meanwhile, in their home base of Chicago, the Morton family itself employed hundreds of local workers and earned a sterling status among the most charitable and influential forces in the private sector. 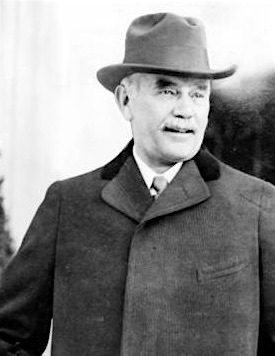 As the family patriarch and company founder, nobody did more to build that rep than Joy Morton, the dapper salt mogul who retained his position of Chairman of the Board right up until his death at the age of 78 in 1934 (one of the years, incidentally, when our vintage container was in circulation). And yes, the man’s name was spelled J-O-Y, not J-A-Y . . . it was a tribute to the maiden name of his mother, Caroline Joy. Like Johnny Cash’s “Boy Named Sue,” growing up with a girl’s name might have helped Joy Morton build some personal character. Because even as the king of salt, he managed to connect with the salt of the earth.

I. Joy to the World

Born in Nebraska Territory in 1855, Joy Morton was the son of Julius Sterling Morton—the Secretary of Agriculture under Grover Cleveland, and the guy perhaps most famous for inventing Arbor Day [he had also tried to make Nebraska a slave state before the Civil War, but that’s not a detail you tend to get as much info on in the typical corporate narrative]. Though they lived on the edge of the frontier, the Morton family wasn’t roughing it. Papa Morton earned his fortune as a newspaper publisher before getting his government gig, and he built quite the impressive estate in Nebraska City, complete with a White House look-a-like mansion and accompanying arboretum.

Joy shared his dad’s interest in plants and trees, as you’ll soon see, but he didn’t follow in his professional footsteps. Instead, he went to work in the railroad industry, starting in Omaha as a clerk in the treasurer’s office of the Burlington and Missouri River Railroad, then relocating to Aurora, Illinois, as a supply agent for the Chicago Burlington & Quincy Railroad. This career “track” eventually brought an ambitious and loaded 25 year-old Joy Morton into business in Chicago, where he bought his way into a salt firm called E.I. Wheeler & Co. He got married the same year, laid down his roots, and went to work on his empire.

[The evolution of the Morton Salt Girl over 100 years]

II. Worth Their Salt

By 1885, Joy and his brother Mark took over full financial control of Wheeler & Co. and rechristened it Joy Morton & Company. As with hundreds of other businesses, Morton benefited from a “right place / right time” element, as Chicago was the rapidly growing central hub between the big salt mines of the East and the new ones in the expanding West. But more than that, the Mortons were also genuinely savvy businessmen, always one step ahead of the competition, and two steps ahead of their own partners in the industry.

Joy Morton set up a warehouse at Randolph Street on the river, and worked out distribution deals with top salt producers from Michigan and New York all the way to Kansas and—eventually—Utah. He also wisely balanced the company’s distribution budget with manufacturing and marketing power, and aggressively invested in a wide range of other industries—railroads, corn starch, meatpacking, and oat cereals, among others. 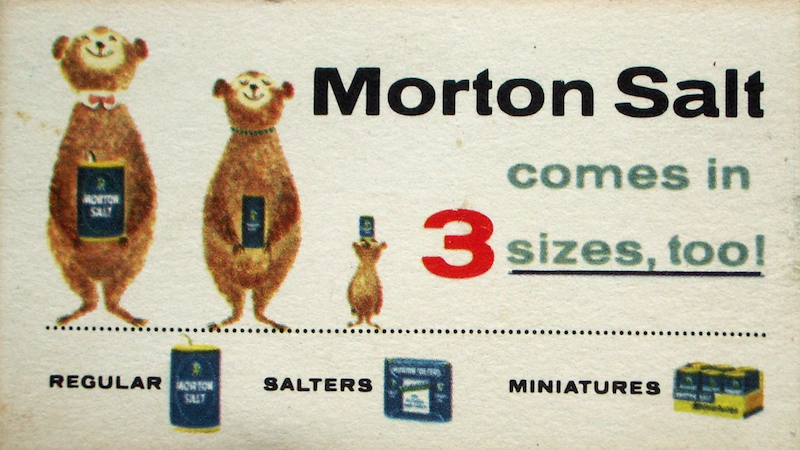 The Morton Salt Company was already the undisputed top dog of the industry by the early 20th century, as Joy Morton controlled dozens of saltworks from his fancy office in the Railway Exchange Building at Jackson and Michigan. He was one of the one-percent of Chicago’s one-percent during the formative years of Daniel Burnham’s 1909 “Plan of Chicago.” But it would still take three more big developments to truly cement the Morton Salt Company as a cultural institution. 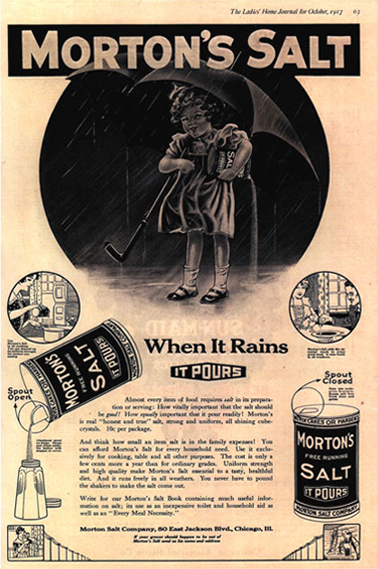 The first of those big developments was the introduction of magnesium carbonate to the Morton “recipe” in 1911. Up to that point, commercial table salt was notorious for problematically clumping together in humid conditions. As the first major manufacturer to recognize that magnesium carbonate could safely counteract this effect and enable salt to flow freely anytime, anywhere, Morton launched a revolution. They capitalized further by creating a new container with a pour spout and a blue paper label, which led to Big Development No. 2.

According to company lore, Morton rejected several pitches from the Philadelphia advertising agency N.W. Ayer & Son before jumping on a back-up idea that became the slogan “When It Rains, It Pours”—a clever reference to the aforementioned fact that Morton’s salt wouldn’t cake together when the humidity rose. From this concept, the first Morton Girl, with her yellow dress and umbrella, emerged.

Those original Good Housekeeping ads don’t really explain the science of magnesium carbonate—they just hit you with some mad lyrical flow instead:

“Never cakes or hardens in any kind of weather—it pours.
No need to shake it—No need to bake it—it pours.”

For all its mighty conveniences, though, the addition of magnesium carbonate probably did considerably less for the public good than the introduction of another new ingredient in 1924 . . . Iodine! 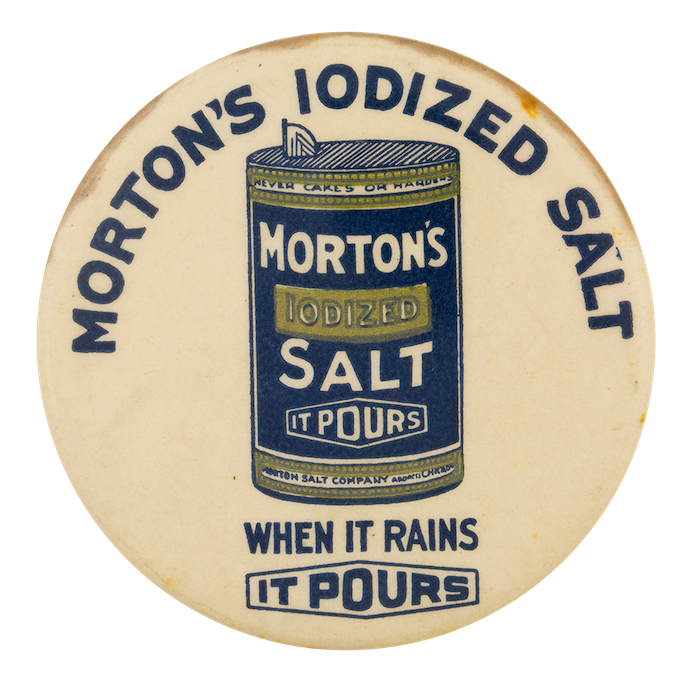 During the early 1920s, Dr. David Murray Cowie of the University of Michigan had championed a theory that adding iodine to common table salt could help combat one of the major public health problems of the time—endemic goiters. Since goiters were linked to iodine deficiencies, particularly in high-risk regions throughout the Midwest, making small doses of iodine more readily available in an affordable, everyday food additive seemed the ideal course of action. Cowie was successful in getting many of the local salt companies in Michigan to embrace the plan, but in Chicago, Morton president Sterling Morton (Joy’s son) and his team were hesitant at first. While those 10-cent pourable containers were dominating America’s kitchen pantries, domestic commercial sales still accounted for a minority of Morton’s overall business, so making a formula change aimed only at the home market sounded risky. As the promising early returns arrived on Cowie’s work in Michigan, however, Morton was quick to reverse course and join the cause. By the fall of 1924, they became the first company to sell iodized salt nationally, and it quickly emerged as a new prominent selling point.

Within a decade of its debut, iodized salt accounted for more than 90% of the table salt market, and Morton was touting not only its success in drastically reducing the goiter epidemic, but various other benefits, as well.

“Taller! Heavier! Children protected against simple goiter are found to be superior in development,” a 1934 Morton ad read. “Iodine, by protecting children from simple goiter, exerts a remarkably beneficial effect on growth. . . . If you want your children to escape being handicapped by this disorder, begin to use Morton’s Iodized Salt at once!“

IV: Legacies and Such 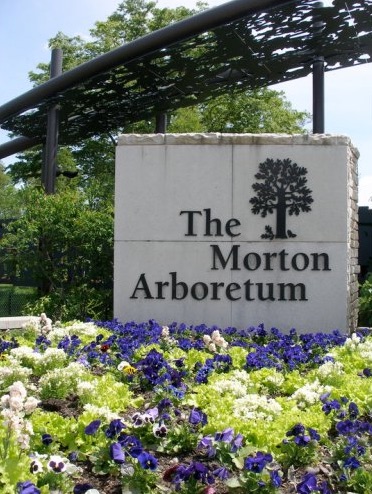 The 1920s also saw an aging Joy Morton transform his sprawling estate in Lisle, Illinois, into a public nature preserve known as the Morton Arboretum. Still open to visitors today, the Arboretum carried on the legacy started by Joy’s father, and includes 1,700 acres of carefully managed trees and plants from around the world. A library dedicated to Joy’s son Sterling Morton is also on the premises.

Morton Salt is still the number one salt producer in North America today, though they’re now a subsidiary of a German company, K+S. The company’s product packaging might be the least changed, and non-coincidentally the most recognizable, of any in America.

Back in 2014, Morton’s most iconic Chicago facility—a 1920s era Goose Island warehouse with a giant Morton Girl painted on its roof—made headlines when one of its walls collapsed, spilling tons of salt into an Acura car dealership next door. Turns out Acuras aren’t safety tested for salt baths. 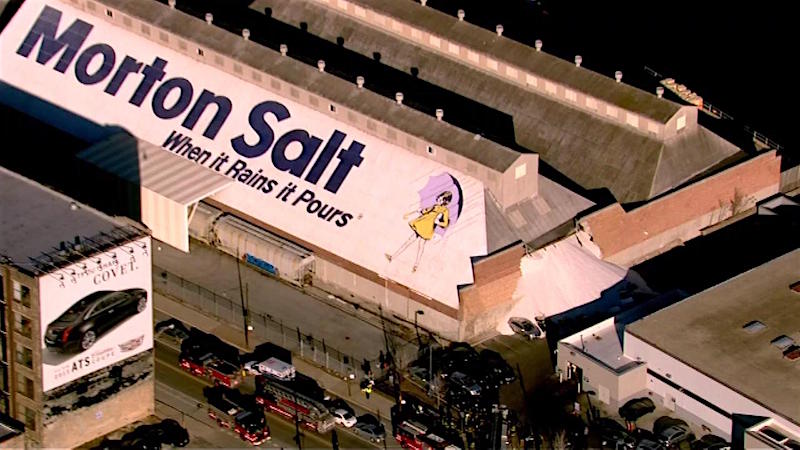 Roughly a year later, the company announced that the same storage building would be closing for good after nearly a century of service. The official Morton Salt corporate headquarters, meanwhile, which has recently been at 123 N. Wacker Drive (and 110 N. Wacker Drive before that) is slated for a brand new building at 444 W. Lake Street. 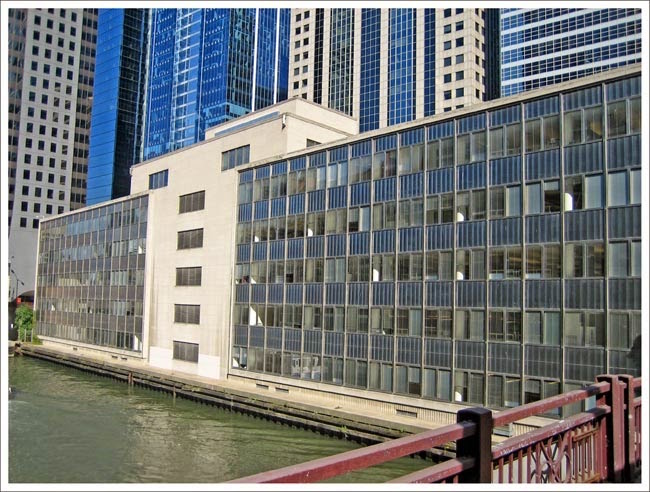 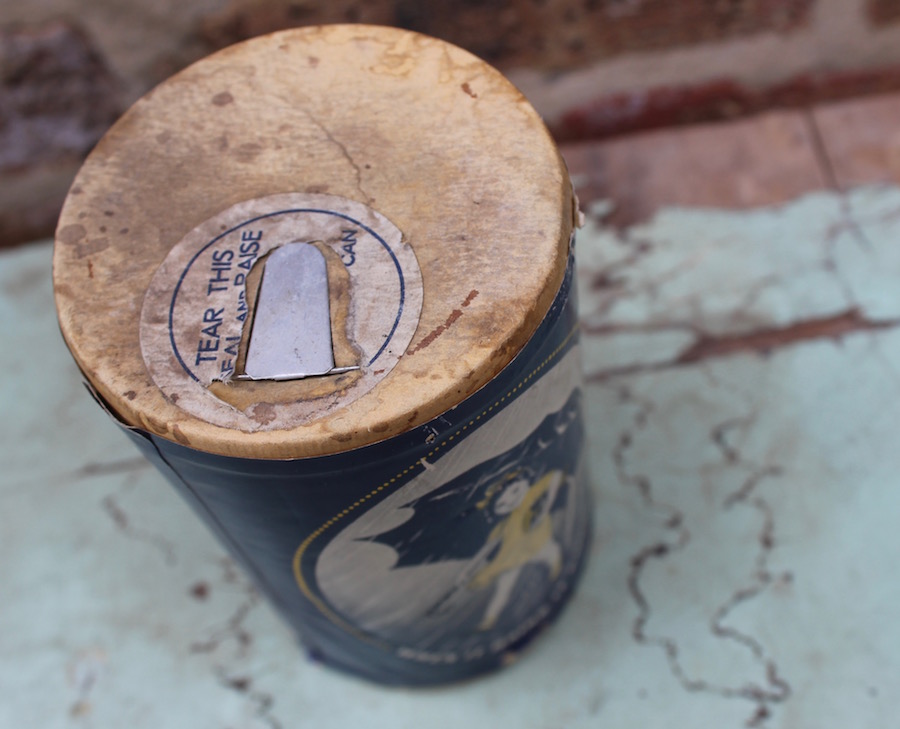 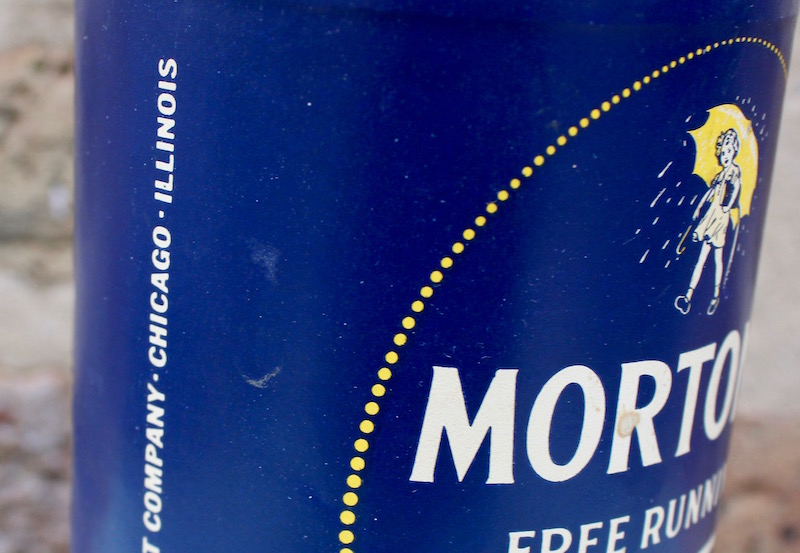 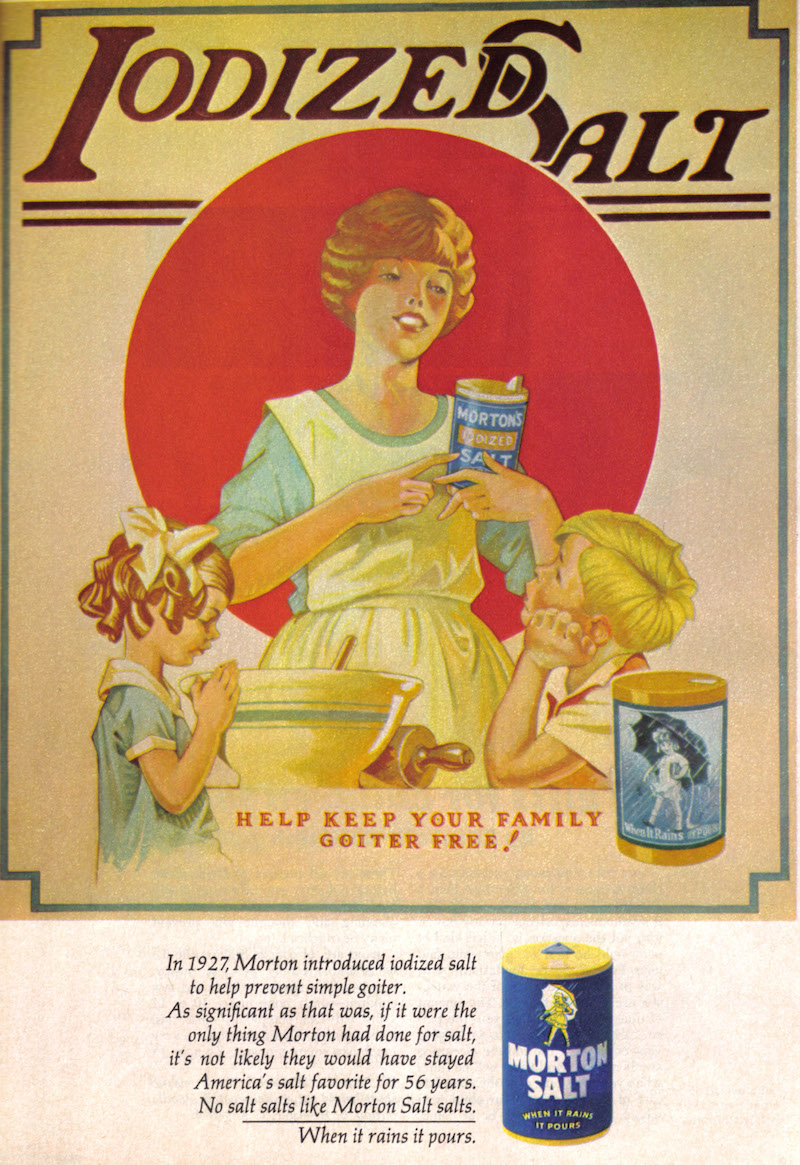