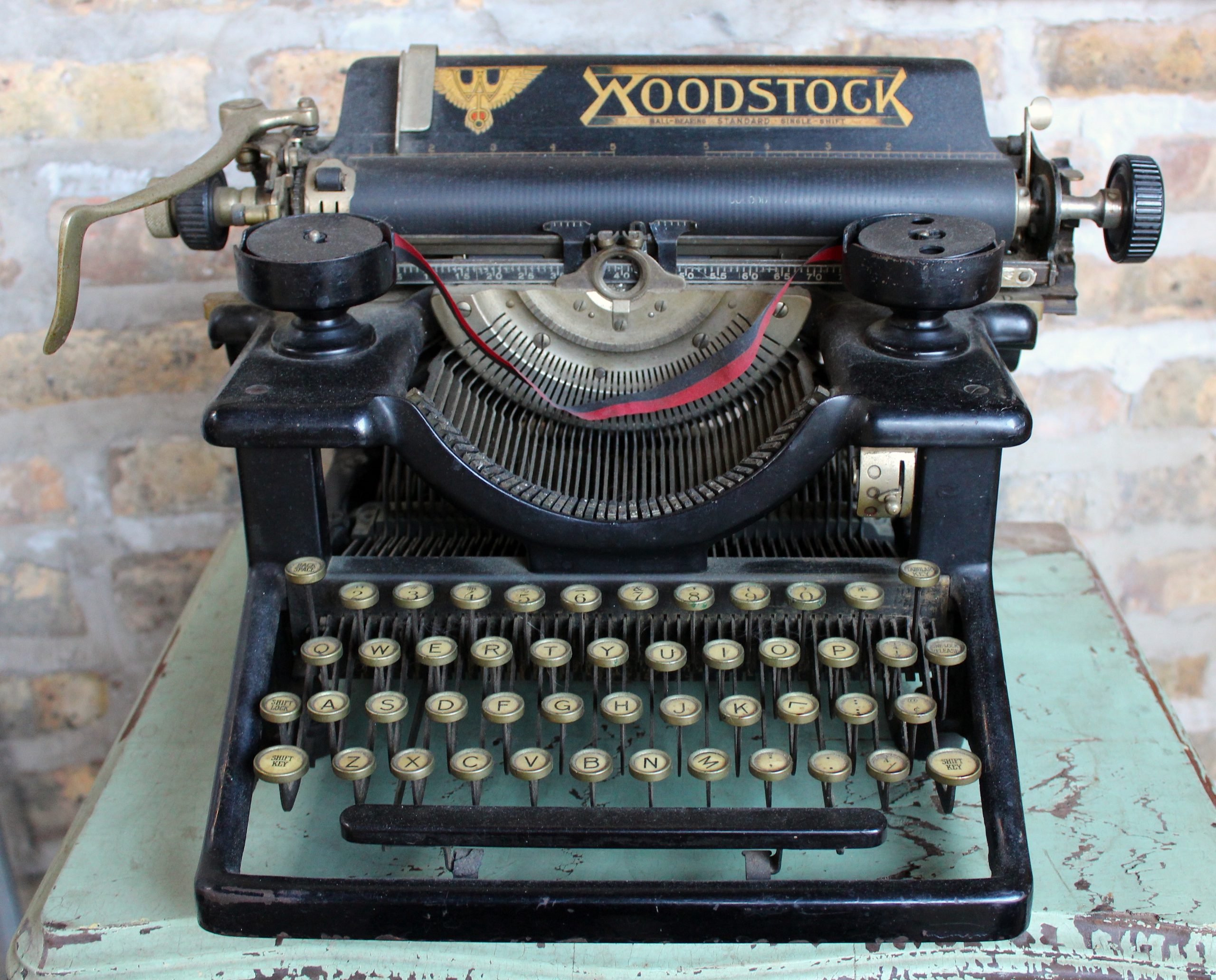 Woodstock is a sleepy, romantic little town of 25,000, accessible by the Union Pacific Northwest Metra rail line from downtown Chicago—about an hour and a half journey. If you go there, you might recognize it as the stand-in for Punxsutawney in the movie Groundhog Day. They even have an honorary shoe imprint in a block of concrete near the town square that says, “Bill Murray stood here.” A bit less memorialized these days, however, is Woodstock’s former standing as the Typewriter Capital of the World. 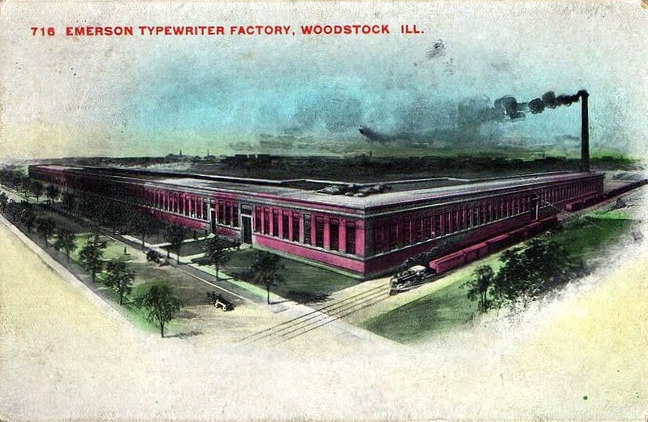 In 1909, Woodstock had already put itself on the typographical map as the home of the Oliver Typewriter Company, which set up its main factory there in 1896. Now, the town had successfully coaxed another manufacturer—the fledgling Emerson Typewriter Co.—to move its operations from Momence, IL, up to a brand new facility at 300 N. Seminary Ave. It proved to be a bit of a bumpy transition at first.

The Emerson Typewriter Co. formed in Kittery, Maine, in 1907, and moved to Chicago a year later, establishing its small Momence factory. The company had generated some buzz around the release of its inaugural 1909 model, designed by noted typewriter architect Richard W. Uhlig. It was supposedly the first and only “Standard and Visible Typewriter” selling at a budget price—a $50 machine “that compares in every particular with all the so-called $100 machines.”

Unfortunately, both the production and sales figures of the first Emerson fell short of everyone’s hopes, and even before work was complete on the company’s new $40,000 factory in Woodstock, the Emerson stock holders jumped ship, selling out to one of the best known names in the Chicago retail universe, Richard Sears. Sears, in turn, put his old pal A.C. Roebuck in charge of the Woodstock operation, which was briefly renamed the Roebuck Typewriter Co. before settling into its final iteration: The Woodstock Typewriter Company. 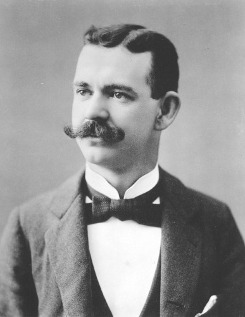 There was a time in 20th century America when a person would say; “I’m serious,” and his friend might snarkily reply, “Yeah? I’m Roebuck.” Technically speaking, the fading retail giant we know today as Sears still goes by the official name, “Sears, Roebuck & Co.”—as they have since 1886. It’s interesting to note, though, that Alvah Curtis Roebuck [pictured] actually sold his stock in the company to Sears very early on—agreeing on a $25,000 buyout in 1895. Sears decided to keep Roebuck’s name on the banner for its positive reputation, and eventually, he decided to do his best to keep Roebuck himself around, too.

In an odd turn, A.C. Roebuck went from a co-founder and owner of his company to more of a traditional salaried employee and manager, working for a number of Sears side ventures. The Woodstock Typewriter Company, it appears, was a particular passion project. Roebuck wasn’t just financially invested in its success; he put his own considerable technological savvy into carrying the Emerson Company’s original goal to fruition—making a top shelf typewriter for the everyman.

The magazine Typewriter Topics was quick to praise Roebuck’s direct contributions to this effort when the new Woodstock model rolled out to consumers in 1915: 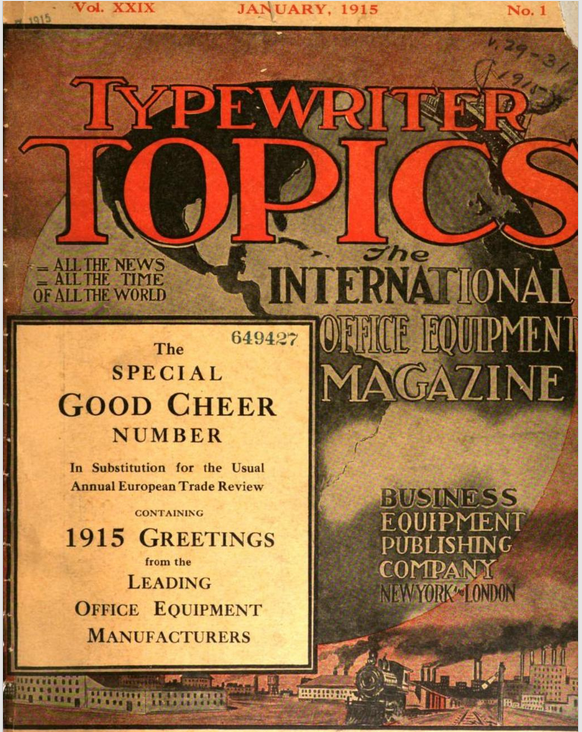 “Quietly, but with energy characteristic of the man, A.C. Roebuck, chief in the work of mechanical development in no less capacity than as inventor, and in executive charge of the company as its president, has created in a surprisingly short length of time a writing machine of the standard variety that for simplicity and effectiveness in performance ranks far above the usual result from a first effort. A most exhaustive test of a considerable number of the machines, covering a period of several months, however, has given a gratifying degree of assurance that this new product is a success in every respect.

“The appearance of new typewriters on the market is of such frequent occurrence that something out of the ordinary is now required to attract more than passing attention. And we believe that our readers will agree with us when we say that the subject of this article, namely the New Woodstock Typewriter, manufactured by the Woodstock Typewriter Co., of Woodstock, Ill., U.S.A., seems to be in a class that at first sight attracts and holds your attention.”

Where the Emerson had stumbled out of the gates, the Woodstock—backed by the wisdom of Sears and Roebuck—immediately gained ground in the highly competitive industry, stealing some market share from their next-door neighbors at Oliver, among others.

Rather than pricing the Woodstocks at $50 to undercut the competition, Roebuck came up with a better scheme. Woodstock typewriters sold for the same industry standard of $100, but buyers could get a rebate off their purchase of up to $32 if they promoted the machine to their friends and neighbors, then provided testimonial proof of having done so. This marketing strategy not only enticed budget conscious customers, it also created thousands of extra salesmen and women. 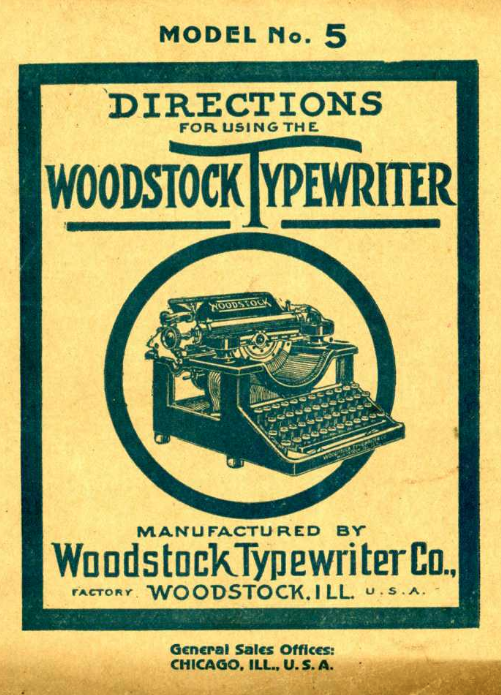 In the years after World War I, the new Woodstock No. 5 arrived (the model in our museum collection), and was touted for its quietness and ease of use. In the instructions that came with the typewriter, the company made a point of expressing that the Woodstock, sort of ironically, needed no instructions. That was what set it apart. “Simplicity is of the utmost importance in any machinery,” the manual read, “and the WOODSTOCK TYPEWRITER is the simplest, has the fewest parts, of any of the high grade typewriters. …The WOODSTOCK TYPEWRITER is so simple that no instructions are needed by one who has had any experience in operating a typewriter…”

The critics at Typewriter Topics (who may or may not have been on Roebuck’s payroll) seem to back up these claims:

“A close inspection of the New Woodstock Typewriter reveals the fact that each and every part the relationship of one part to another, and the relationship of each part to the whole, has been just as carefully studied and executed with just as much precision as has the design of the machine. While the harmonious and highly artistic appearance of the machine is the first thing that catches the eye of the casual observer, it is the extreme simplicity and splendidly balanced relationship of the various parts that immediately appeals to the critical mechanical observer. The Woodstock machine is standard in every particular; in shape, weight, equipment, design, efficiency, etc., is single shift, having 42 keys in four rows, and we were surprised to learn that the New Woodstock visible machine has approximately 20 percent less parts than other standard single shift typewriters.”

The Woodstock No. 5 in our collection has a serial number of F94926, dating it to early 1922—the heyday of typewriter mania in the town of Woodstock, when half of the world’s entire typewriter production was centered here. By the end of the decade, Oliver would shut down its local plant, and the market crash would force a happily retired, 66 year-old A.C. Roebuck to return to work at his original home, Sears, Roebuck & Co.

To the surprise of some, even against more reputable manufacturers like Underwood, Royal, and Remington, the Woodstock Typewriter Co. did survive the Depression, and eventually hit a new peak as the main typewriter supplier to the military in World War II.

Success only made the company ripe for the plucking, though, and in 1950, Woodstock Typewriter Co. was purchased by another successful wartime manufacturer, R.C. Allen Business Machines. R.C. Allen kept producing typewriters in Woodstock into the ‘60s, but eventually joined every other American typewriter in giving up the ghost by the ‘70s. The old Emerson/Woodstock factory went on to serve as the home of Woodstock Wire Works before getting converted into fancy loft apartments.

If you’re interested in how a Woodstock typewriter became the central piece of evidence in one of America’s biggest espionage trials, be sure to check out the other vintage Woodstock in our collection—the 1933 model—here. 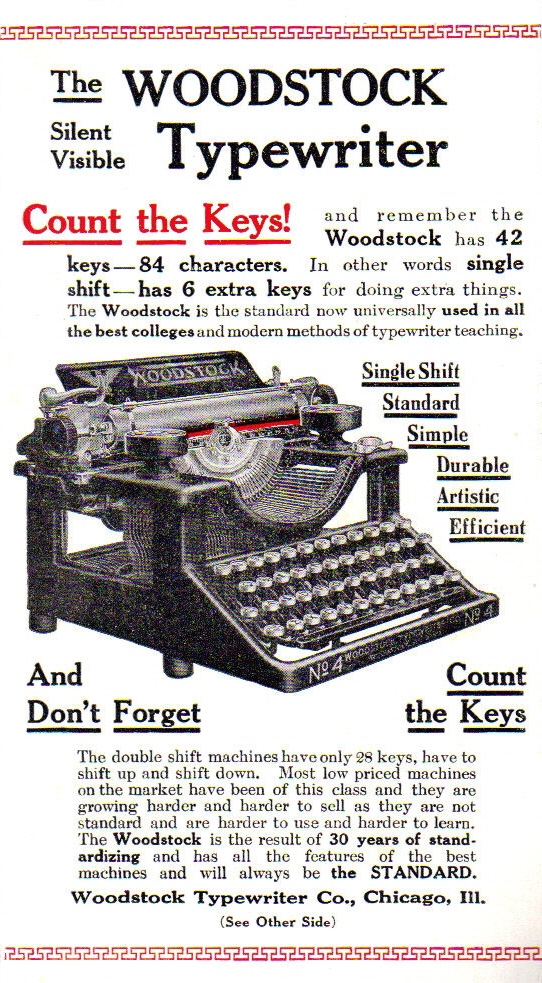 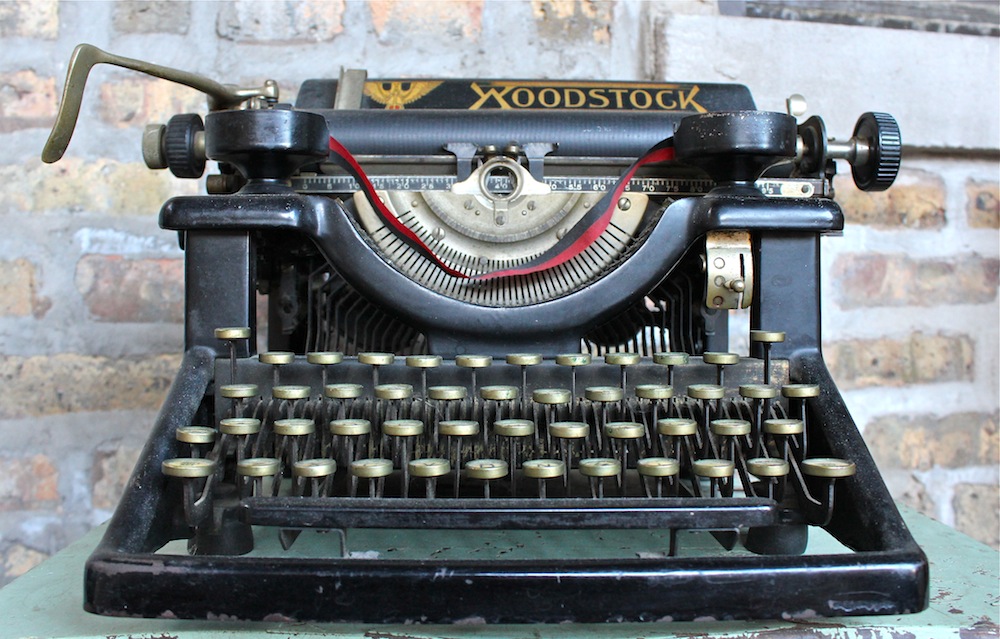 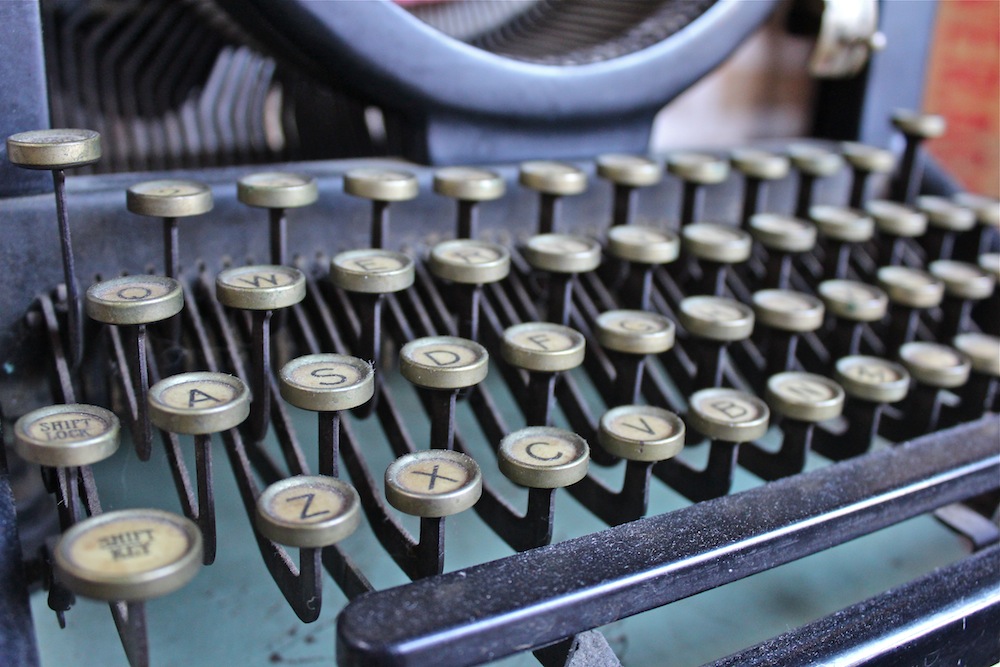 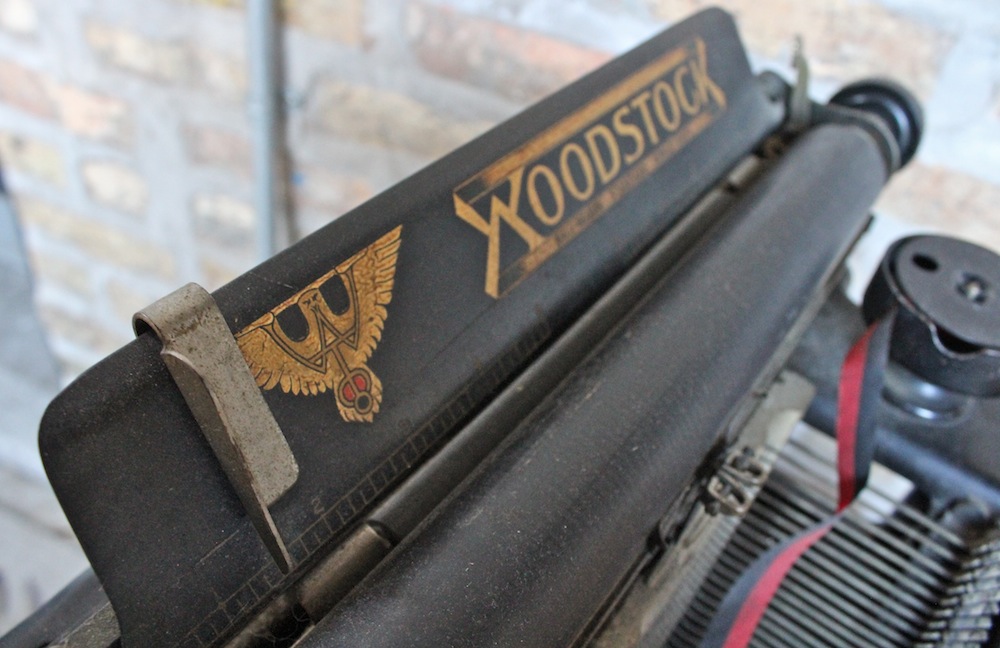 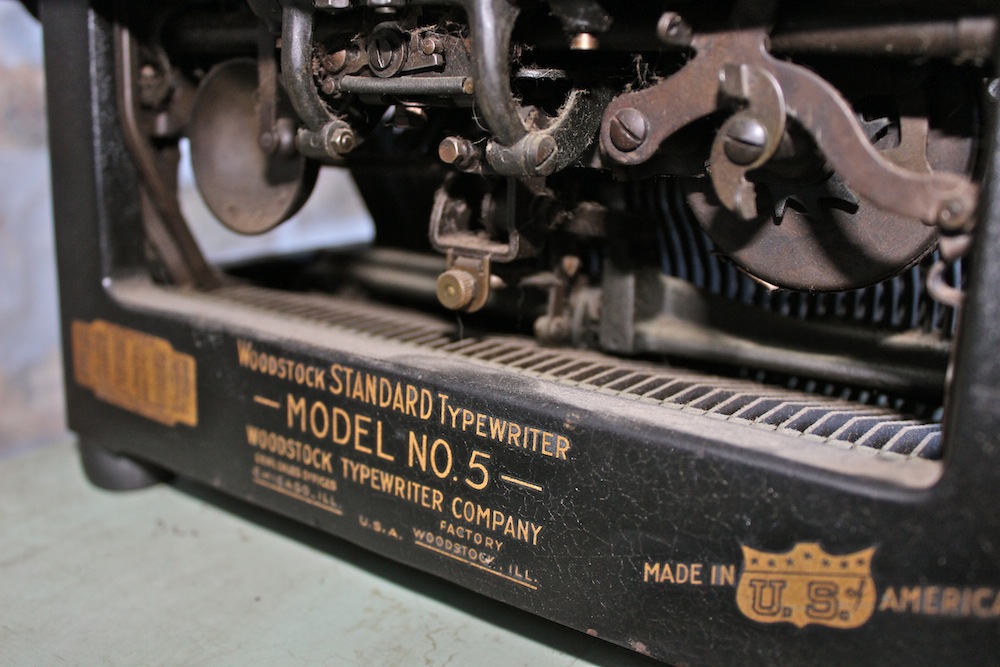 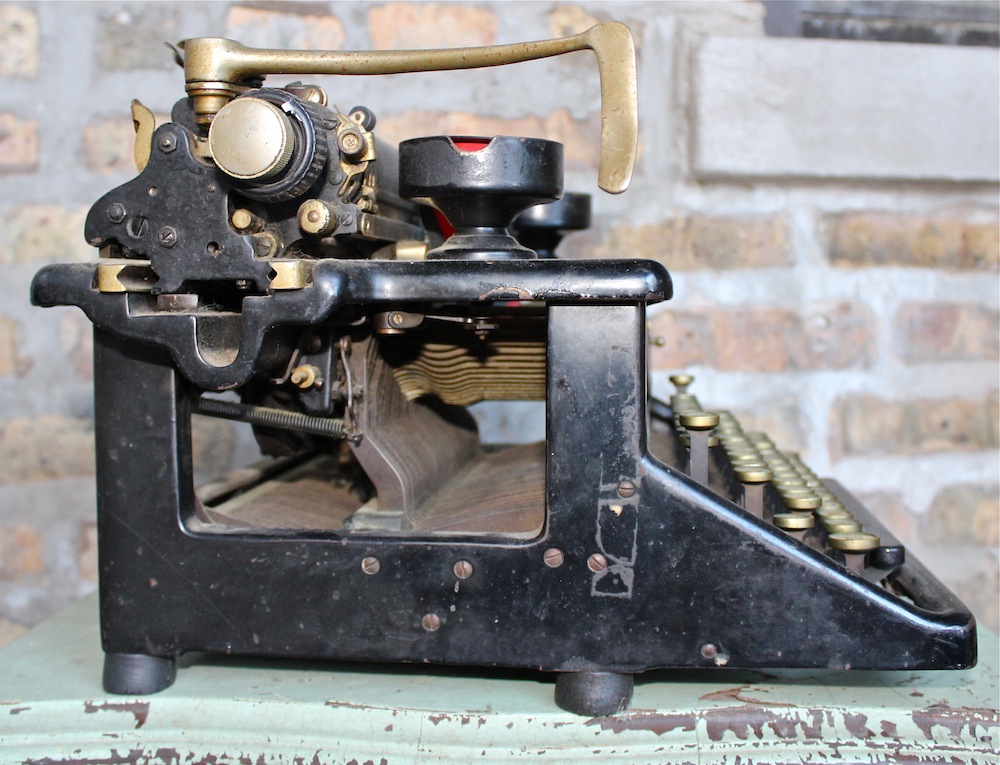 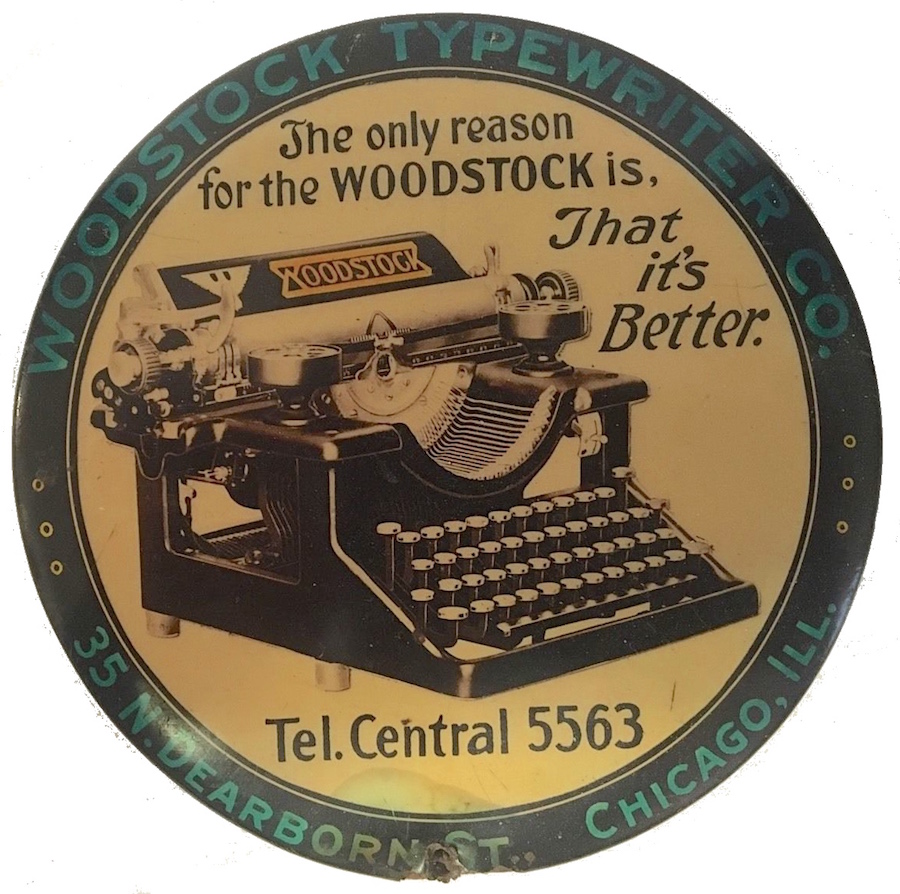 “I have A Woodstock No. 4 that was given to my mother when she was a teenager. I used it through high school and college. I liked to listen to it as my mother typed on it – the sound of the bell at the end of a line.” —Pattie, 2020

“My grandfather sold Woodstock Typewriters. On his 1918 draft card, he showed the address as 23 W. Washington in Chicago.” —thejenr, 2020