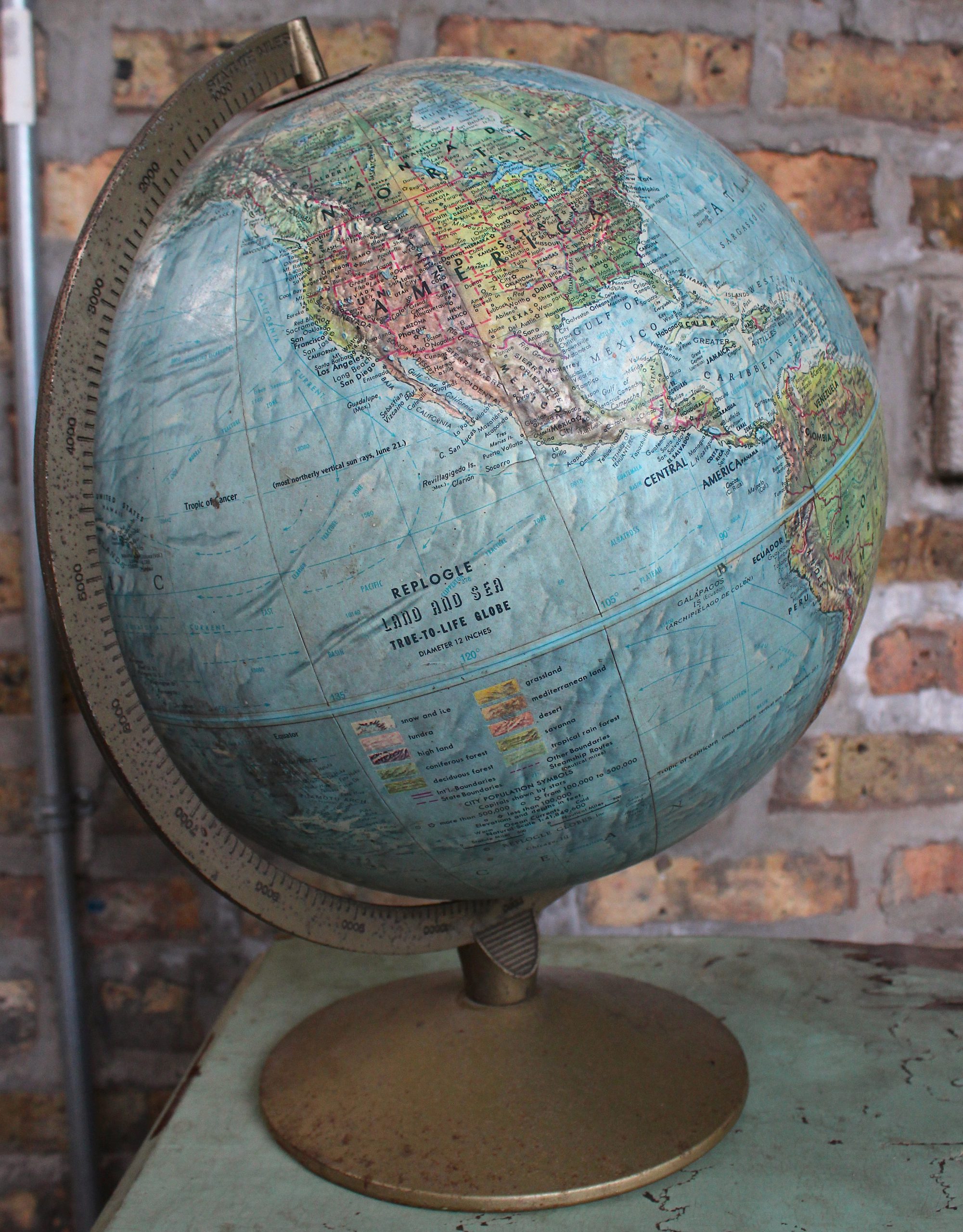 Replogle, appropriately enough, is one of Chicago’s best-traveled brand names. If you look for the trademark on any random spinning globe you encounter (it’s usually stamped a little west of the Galapagos Islands), you’ll quickly get a sense of how this former mom-and-pop enterprise grew larger than any “to-scale model” could measure.

As a kid, I used a Replogle globe to find the location of faraway cities. Now, I’m just as often visiting one of those cities, and inevitably finding Replogle globes there. Once you start noticing them, you’re hard-pressed to go far without spotting another one. There was an ornate 1950s model in a B&B in New Orleans; a utilitarian ‘80s design sitting in a bookshop window display in Dublin, Ireland; a small ‘60s bookend style in a café in Rome.

For the better part of a century, Replogle has been the world’s leading manufacturer of… the world. Even many of the ones that don’t say Replogle were still birthed in the company’s old Chicago factory. And it all started nearly 20 years before mankind had ever seen an actual photograph of the planet Earth as we know it.

Luther Replogle is the hero of this story—another example of the down-and-out salesman with a dream of something greater. He didn’t invent the globe; some Greek guy beat him to that punch about a millennium beforehand. But Replogle, a Pennsylvania Dutchman himself, saw a potential for these objects that no one before him had quite yet envisioned.

The romantic origin story of the Replogle Globes empire remains a beloved part of company folklore. In the 1920s, Luther Replogle (known to friends as “Rep”) found himself in Peoria, Illinois, selling bulk school supplies for the Weber-Costello Company. Somewhere along the line, he got to thinking that the world globes he was hawking might have a wider appeal beyond the classroom. He didn’t see them limited to rich men’s desks in stuffy libraries, either. Radio, telephones, and film were making the world feel smaller, and the average citizen wanted a tangible means of putting it all in a proper geographical context. An affordable means, too. 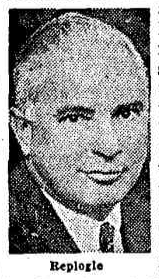 And so, in 1930, when most Americans were clinging to their jobs in desperation, Rep supposedly quit his, then started a DIY globe-making operation in his basement. An alternative, more likely version of this story is that he and his wife Elizabeth were both out of work at the dawning of the Depression, and the globe idea was their wild shot in the dark at digging their way out. They borrowed $500 (about $7,000 in modern money) to start a company out of their Chicago Heights apartment, meticulously crafting and hand-painting 12” globes from cardboard and plaster. Luther then packed the fragile spheres into his Model T and drove around Chicago selling them for $25. That was the equivalent of $350 in 1930s America. Business, predictably, was slow.

Even when Rep purchased a modest manufacturing space at 320 S. Franklin St., in the loop, he could afford only one employee, a Swedish immigrant, to work there.

Then the 1933 World’s Fair finally got the literal ball rolling. Ahead of the event, Chicago’s beloved department store Marshal Field’s recruited Replogle to make 100,000 souvenir globes for the “Century of Progress” celebration, each priced at the far more reasonable $1.75 a pop (roughly $32 in modern terms). These globes were a huge success, and Rep’s dream was officially realized at the humble age of 31 (his first wife Elizabeth sadly died just a few years later, but her role in the company’s early success should not be overlooked). 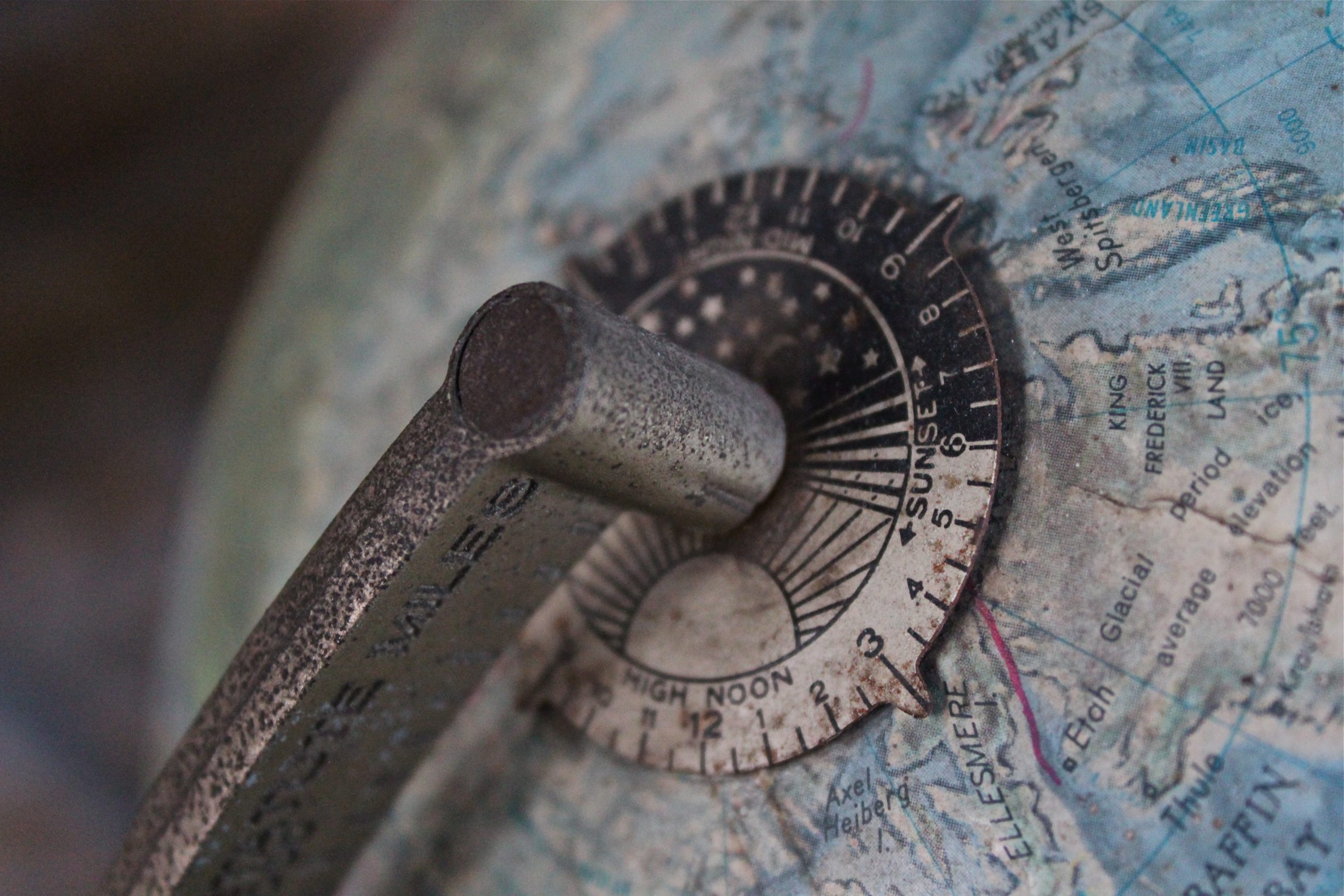 The other great coup for Replogle Globes, Inc. came from a powerful, unpaid endorsement from none other than the President of the United States, Franklin D. Roosevelt, who started encouraging families to “get out your globe” as he described complex world affairs during his “Fireside Chat” radio broadcasts. Just about every U.S. President since has had a Replogle globe in the White House.

And so, like most of the country, Replogle found itself on an economical upswing after the war. By the 1950s, the company had graduated from a 300 square foot factory space to a 60,000 sq ft. space at 325 N. Hoyne St., and finally a 75,000 sq. ft. plant at 1901 N. Narragansett Avenue in North Austin. That factory would eventually expand to nearly twice its original size, and was home to Replogle Globes for over 30 years. It’s still in use today as the home of Chicago’s Industrial Steel & Wire Company.

The globe-building process had come a long way by the ’50s, with a peak manpower of 300 employees making upwards of 2,000 globes per day. But that doesn’t mean the work had become easy. First, there was the incredibly difficult, never-ending task of staying up with political upheavals and international border disputes and name changes. You can pinpoint the age of the globe in our collection to 1964, for example, because Zambia was no longer Northern Rhodesia, but Barbados was still “Barbados (Br.).” Sometimes, getting those details accurate actually depended on whom the globe was being built for. This was still the case when Sun Times reporter Neil Steinberg visited the Replogle plant in 1998 and spoke with head cartographer LeRoy Tolman [pictured in 1987]. Here’s an excerpt from that story: 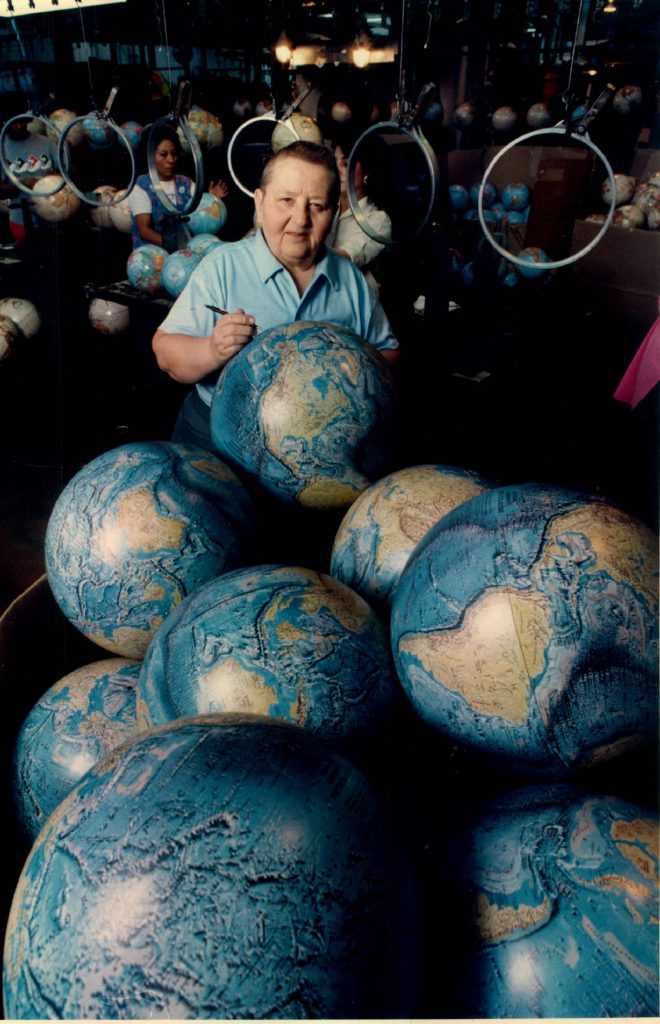 “Part of Tolman’s job is determining the accepted outline of a nation. He spreads a big map of Egypt out over his desk, responding to an irate Egyptian government complaint that its southern boundary with Sudan is shown as it actually is, and not how it exists in the fervent hopes of the Egyptians.

“Not much of a market in Egypt, so Tolman, after checking with the U.S. State Department, keeps the border where it is in actuality. That isn’t always the outcome. The company wants to sell globes and doesn’t flinch at following a customer’s interpretation of what the world looks like.

Globes going to Arab countries retained “Palestine” years after Israel was founded. Japanese globes show the country as still possessing the Kirin Islands, which the Soviets stripped away in 1945.

So if Saddam Hussein placed a big enough order, he could get globes showing the United States as a possession of Iraq? ‘All but Illinois,” said Tolman. ‘Economics is the prime factor.'”

According to a 1953 article in the Chicago Tribune, “Although most globes are made by machines on a modern assembly line, much work is done by hand and by skilled artisans. For example, it takes about two years to train a person in the globe covering technique. A skilled globe coverer can complete about ten 12-inch globes or eight 16-inch globes a day. It takes a day and a half to put the map on one of Replogle’s massive 32-inch globes.”

In that same story, Luther Replogle himself added: “If you think pasting strips of the map onto a round globe by hand is easy, just try to cover a smooth round apple sometime with a flat piece of paper without creating any tears or wrinkles in the paper.” 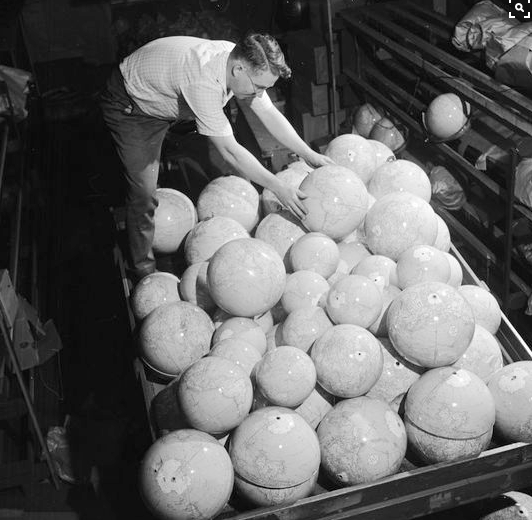 The curved steel rings and base stands of every Replogle globe were manufactured in the same plant, too, so you had workers fusing globe hemispheres together; or pressing degree markers into the steel rings; or coating the maps with hard lacquer. The workforce at the Austin plant was as diverse as it was dedicated. As former company President William C. Nickels explained in a 1977 News Journal article, “Just as it takes many different people to make up a world, it takes a variety of people to make a world.” 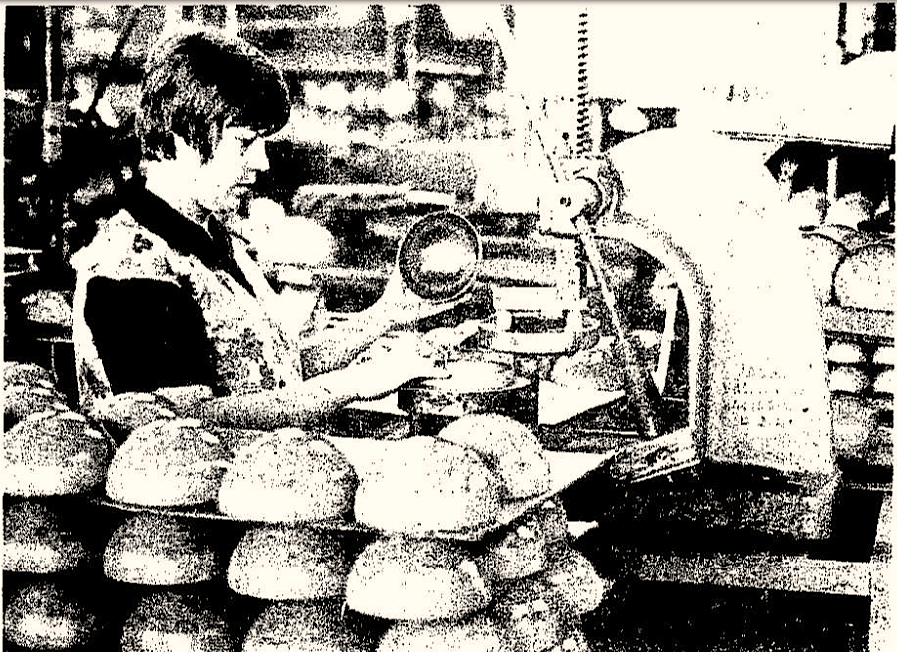 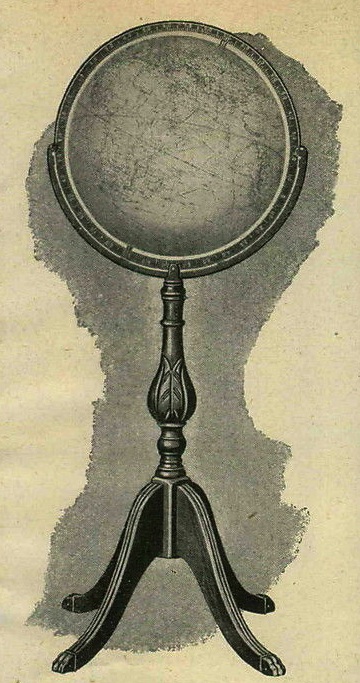 Luther Replogle sold his business to Meredith Publishing (the giant behind Better Homes and Gardens and Ladies Home Journal) in 1959, but he remained President and CEO for a while longer as Replogle Globes expanded its international business in the ‘60s. In 1969, President Nixon appointed the well-traveled Replogle, then 67, as the new U.S. Ambassador to Iceland. Sounds fairly random, but Rep was down for it.

“It was an ideal post for him,” according to a Luther Replogle bio on the Replogle Foundation website. “He worked diligently to strengthen U.S. foreign policy and defense ties with this valuable NATO [country], supported development of the national air carrier, Icelandic Air, and took a lively interest in the people and history of the country.”

When you’ve been making globes for half a century, you start to see the world differently, and Luther Replogle clearly gained a passion for seeing the places behind the names he’d learned so well.

Shortly after his death in 1981, the Replogle Globes manufacturing plant moved out of the city to Broadview, Illinois. More recently, the company landed in Indiana for a five-year stint. As of 2016, however, Replogle is an Illinois company again, with a new headquarters in Hillside. They remain the leading name in globe production after 86 years. 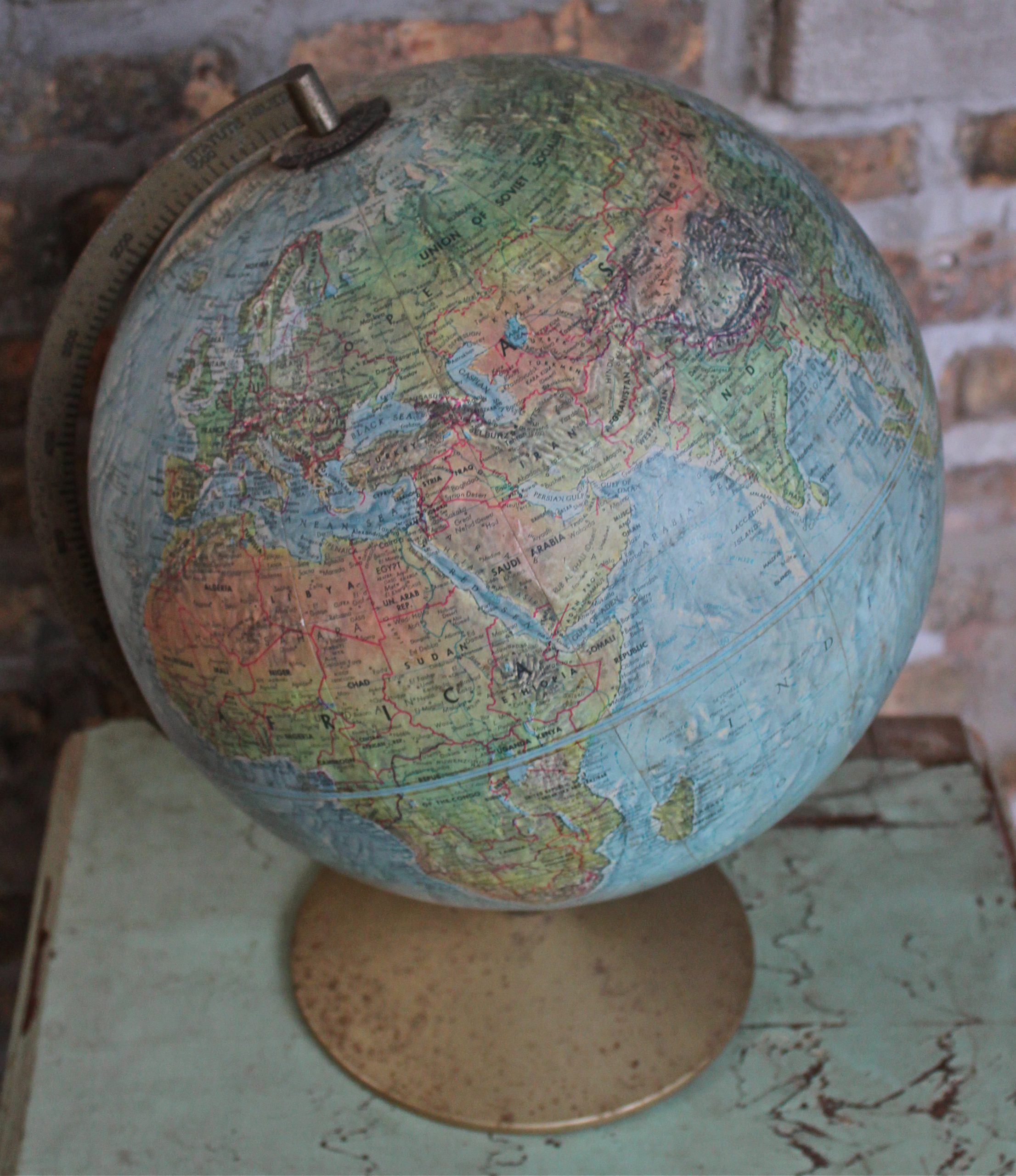 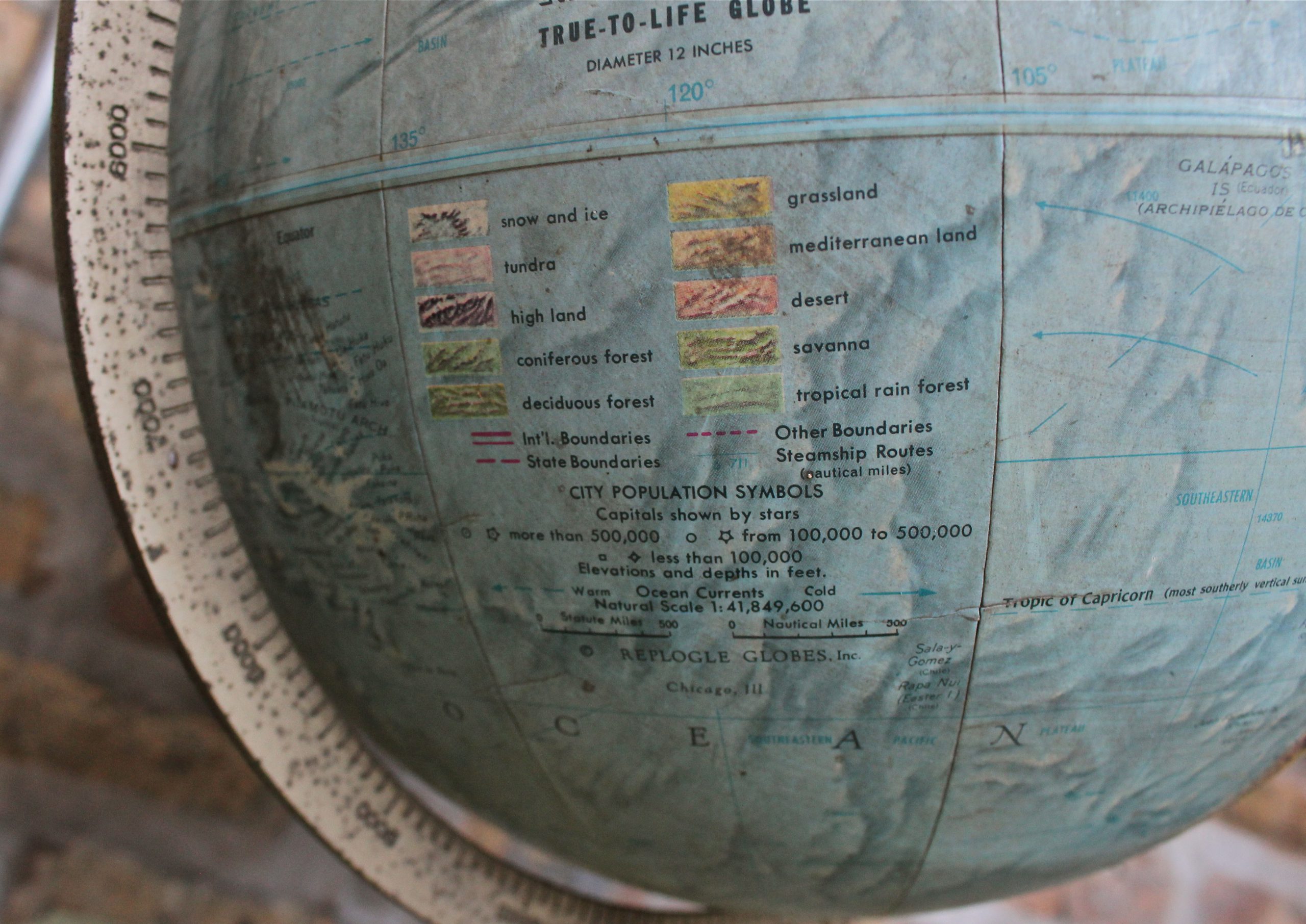 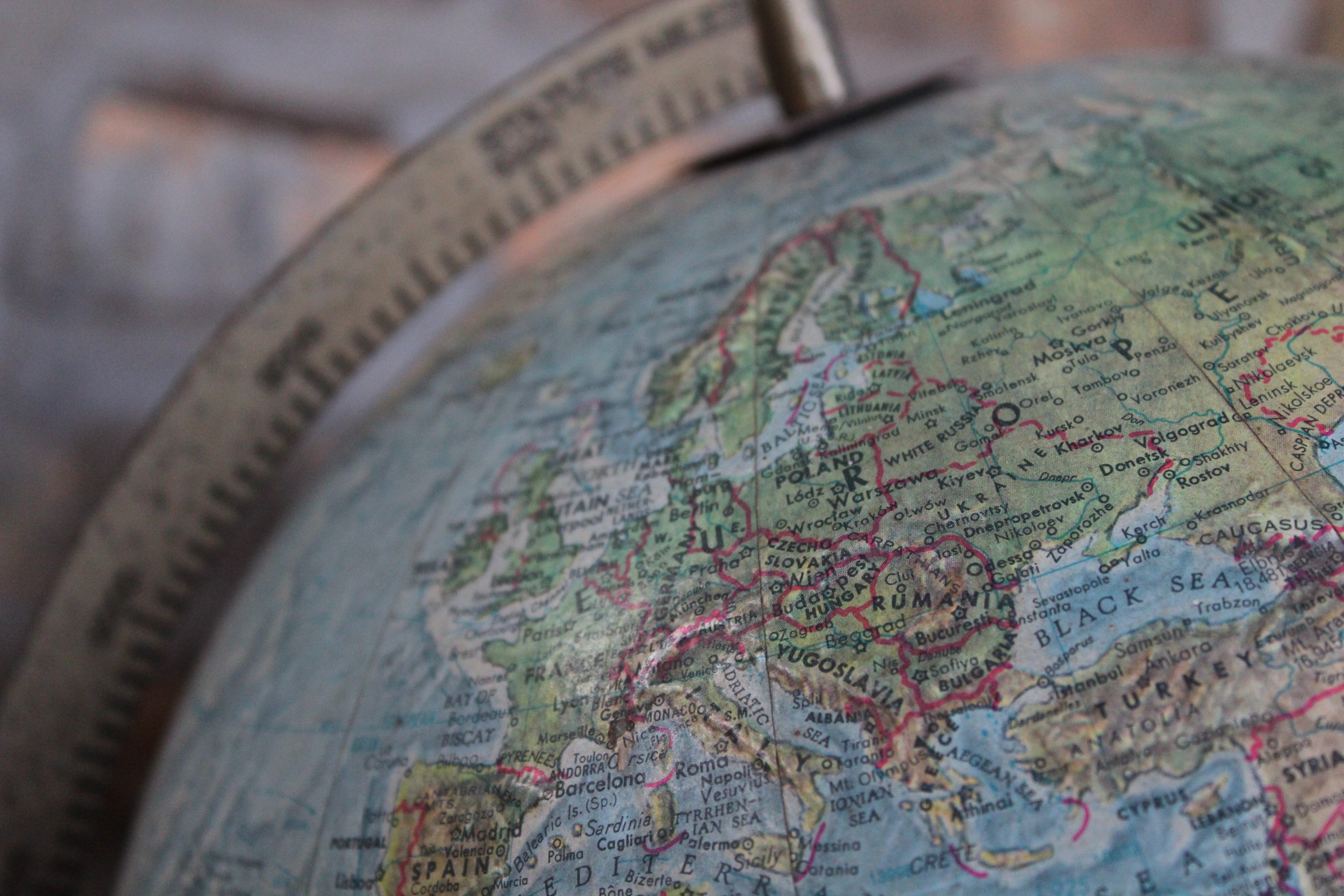 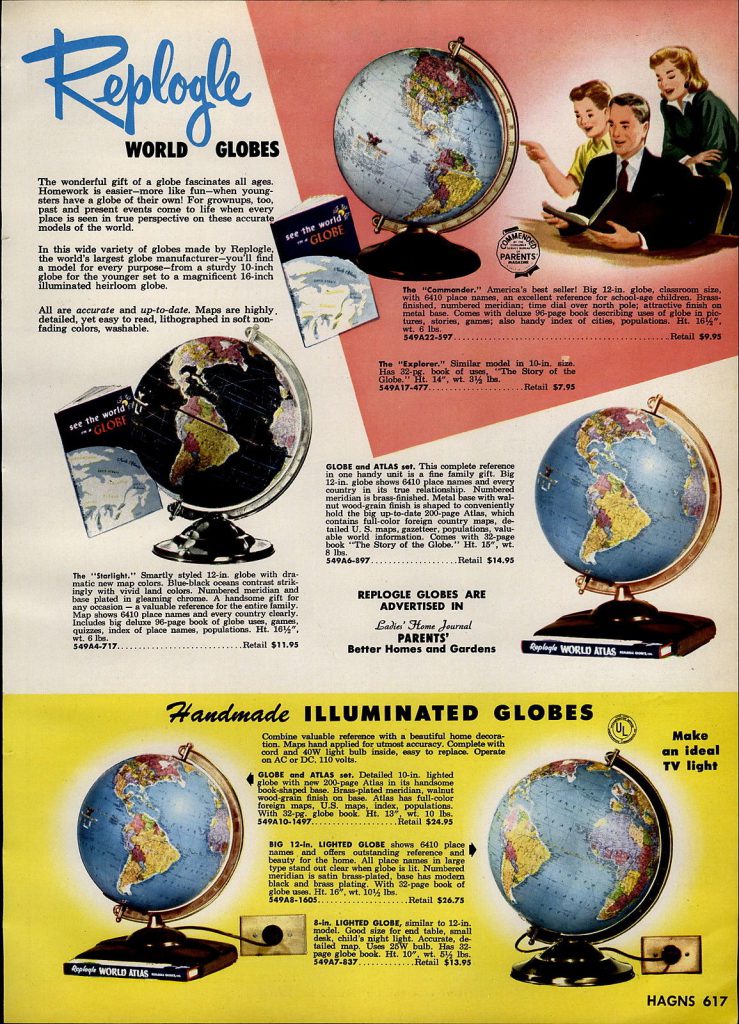 “Hi, my name is Eleanor McMullen and i worked in Replogle Globes through the summer of 1984. I spent three months in Chicago as an Irish student on a J1 visa. I have very fond memories of working in the Narrangansett plant and remember fellow American students Sam Tinaglia, Gary Reimer, and Immy White. Still talk about my time there.” —Eleanor McMullen, 2017