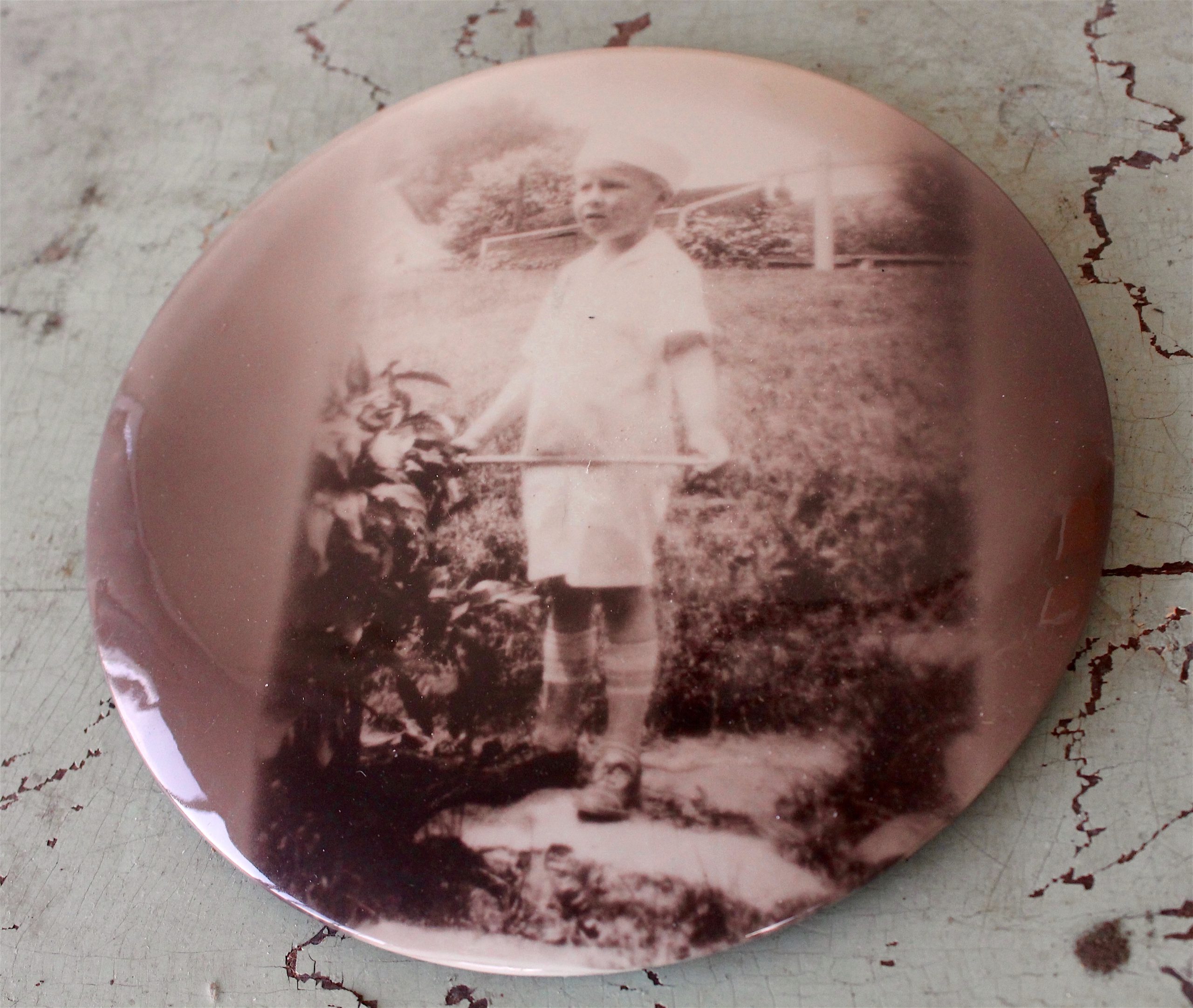 “Don’t Let Memories Grow Dim!” That tagline from a 1919 advertisement for Columbia Medallion Studios takes on a whole new context now that it’s appearing within a hazy retrospective on the memory-saving studio itself. Who preserves the preservers?!

Sadly, for all of Columbia’s noble (or opportunistic) efforts in helping people create “imperishable” copies of cherished family portraits during the early 20th century, the company had less success ensuring its own permanence. The Chicago-based operation was supposedly the world’s largest purveyor of hand-painted photo medallions for several decades—an intriguing niche. But any deeper insights into that history are few and far between. 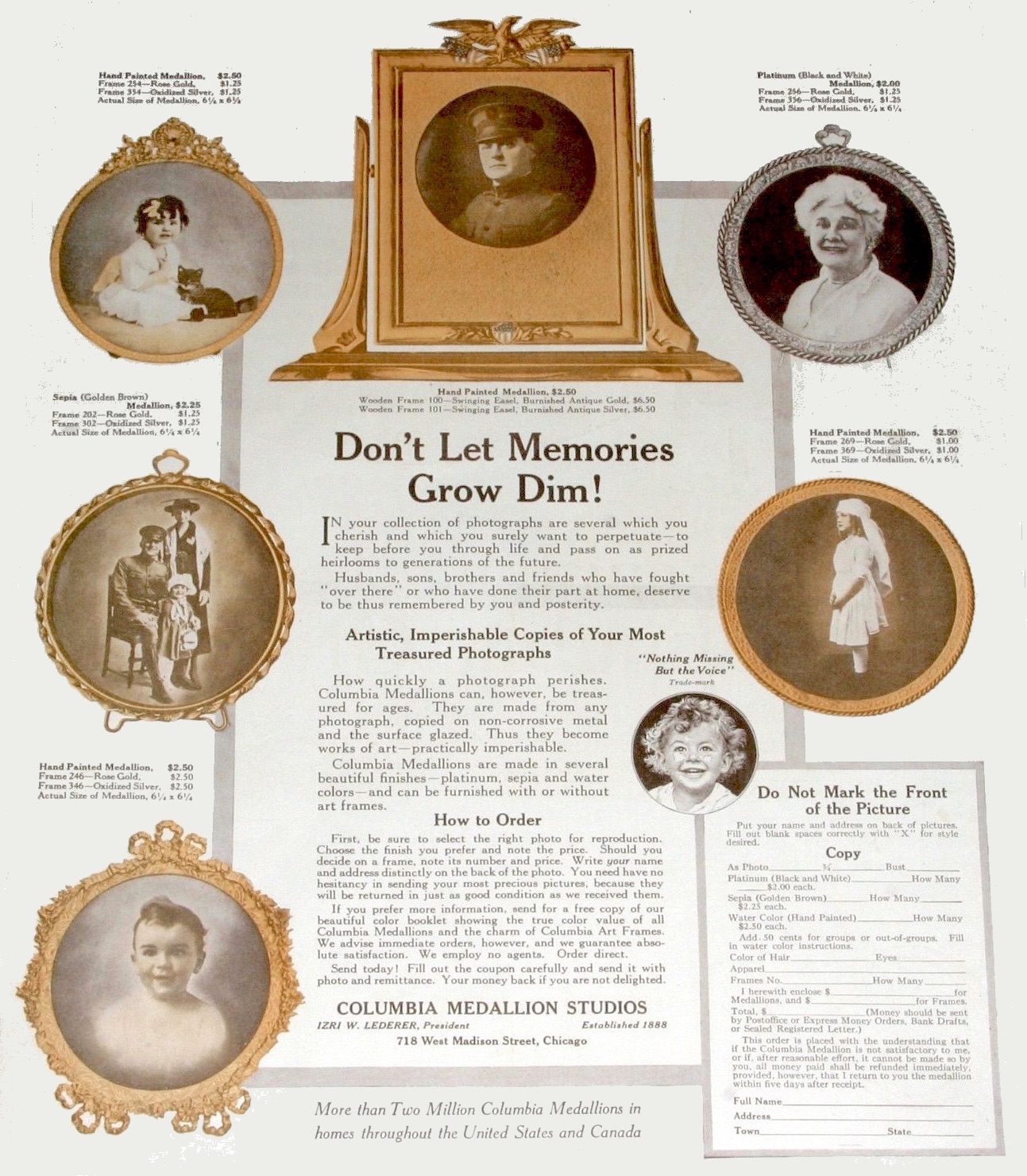 The major legacy Columbia left behind, rather morbidly, are the hundreds of 6-inch medallions now floating anonymously through America’s antique shops and eBay listings—perfectly preserved, as intended, but mostly robbed of their historical significance and emotional resonance. Since these portraits rarely included any printed descriptions of the people or places depicted, we’re left to consider the irony of the situation. The medallion was purchased to keep someone’s memory alive, but the memory itself was always dependent on the customer being around to remember it. 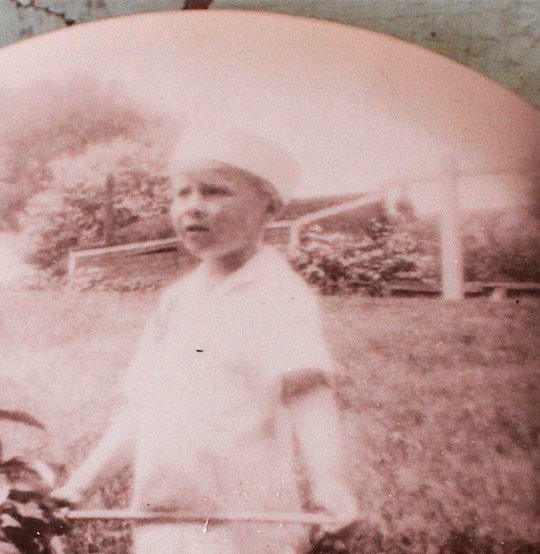 I suppose, in fairness, that this is going to be the norm for mankind going forward, now that nearly every picture we take is digitally stored in some intangible cloud, impervious to degradation. Be sure to tag all those old jpegs unless you want to be remembered some day merely as “unknown child in garden.”

Aaaanyway, as for the industrial end of things, we can track the beginnings of the medallion business back to 1888, when it was founded as the Columbia Portrait Company; a name it retained in an official capacity even after the “Columbia Medallion Studios” became more of its commercial identity during World War I.

Back in its earliest days, Columbia’s reputation wasn’t exactly stellar. In that famous World’s Fair summer of 1893, for example, company president “Frank Horn” was revealed to be a swindling con man named John Horner, and was forced to cough up $75 (a somewhat substantial sum for the time) to victims of his admitted forgeries. Somehow or another the business survived that debacle, and by the turn of the century, a new president, H. Irving Goodrich, had semi-legitimized the operation, renting out an office above the Haymarket Theater on West Madison Street.

Then, more bad press. In the fall of 1904, a chemical explosion in the Columbia Portrait Company lab started a fire that forced a panicked audience to evacuate the theater below. Six firemen were hurt. And yet . . . the medallion business soldiered on yet again. 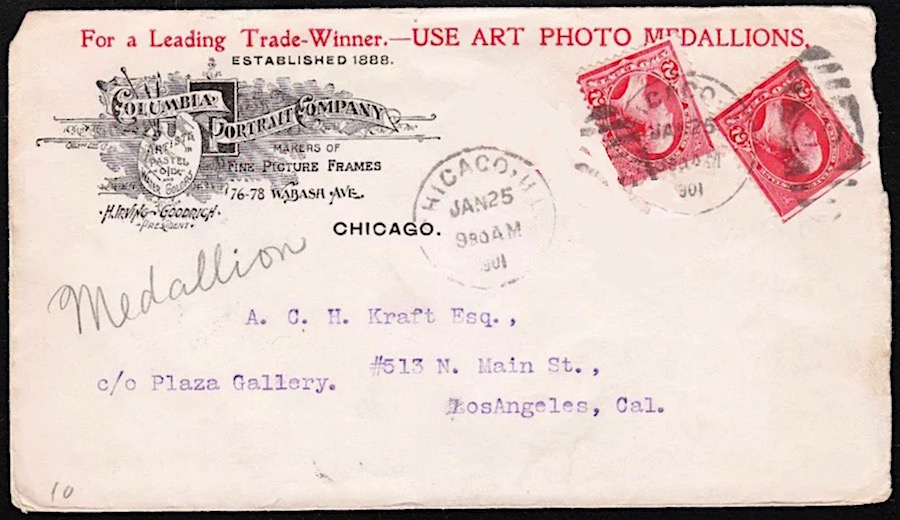 The company’s home office moved several times as its in-house workforce grew from less than 10 to more than 30 (they also had a small army of salesmen). Some confirmed addresses over the years include:

In each of these locations, the making of the medallions themselves was just one small aspect of the business, and probably the cheapest (they’re basically just oversized buttons without the pinback). Columbia made most of its profits from getting customers to upgrade to fancy frames, and likely also through special arrangements with department stores, which offered medallions as shopper enticements.

Keep in mind, in the early 1900s, you really had your first generation of Americans that could look back nostalgically at actual photographs of their parents and grandparents. And because these images were so fragile and precious, the sales pitch of seeing them transferred to a glossy bubble for posterity was understandably appealing.

Columbia used the slogan “Nothing missing but the voice,” and their ads proclaimed: “Pictures fade—Columbia Medallions last forever. … They are made from any photograph, copied on non-corrosive metal and the surface glazed. Thus they become works of art…”

By 1917, Columbia offered three main custom finishes: Steel-Tone (black and white), Sepia (golden brown), and a hand-painted option in watercolors. With the latter, customers could request the addition of detailing not even visible in the original photos, like eye and hair color. A painted medallion, with a frame, would run you $3.50, or about $66 in today’s cash. The cheapest option—steel-tone with no frame—was about half that price.

The company seemed to hit a peak in the years during and immediately after World War I. Advertisements in 1919 claimed that “more than two million Columbia Medallions” were in homes across the U.S. and Canada, and company president Izri W. Lederer (1880-1951) seized on the obvious connection between memory preservation and wartime.

“Husbands, sons, brothers and friends who have fought ‘over there’ or who have done their part at home, deserve to be thus remembered by you and posterity,” one ad read. 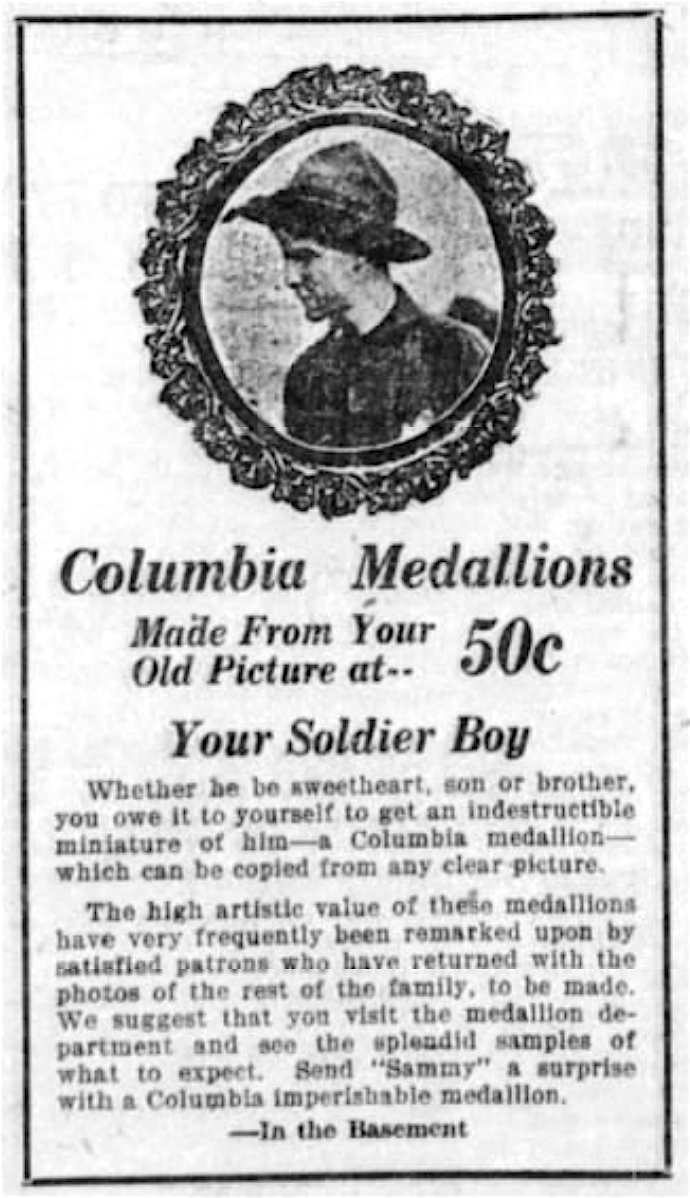 Izri Lederer certainly appears to have been an interesting character, often (mis)represented in media reports as a “movie studio head” thanks to his company’s cinematic-sounding name (in fact, the medallion business pre-dated Hollywood’s Columbia Pictures—est. 1924—by quite a few years, but there was confusion all the same).

It’s hard to say how much direct involvement Lederer [pictured] actually had with the medallion-making process, or how much artistic talent or technical skill he brought to the table. The man was certainly a good salesman, though, as evidenced by his dedication to the business (he made regular appearances at special medallion sales events across the continent) and his well stocked bank accounts.

Living out of the swanky Edgewater Beach Hotel, Lederer poured his medallion earnings into real estate and other business investments, all while playing himself off with the media as some sort of Bohemian hepcat artiste.

“People of melancholy temperament very rarely have clear blue eyes,” Lederer told a newspaper man while on a visit to Los Angeles in 1919. The brief interview, which found syndication in regional papers across the country (many of them again mistaking Lederer for a “movie studio head”) showcased a particular talent Izri supposedly had for sizing up a photographic subject—pretty L.A. girls, specifically. 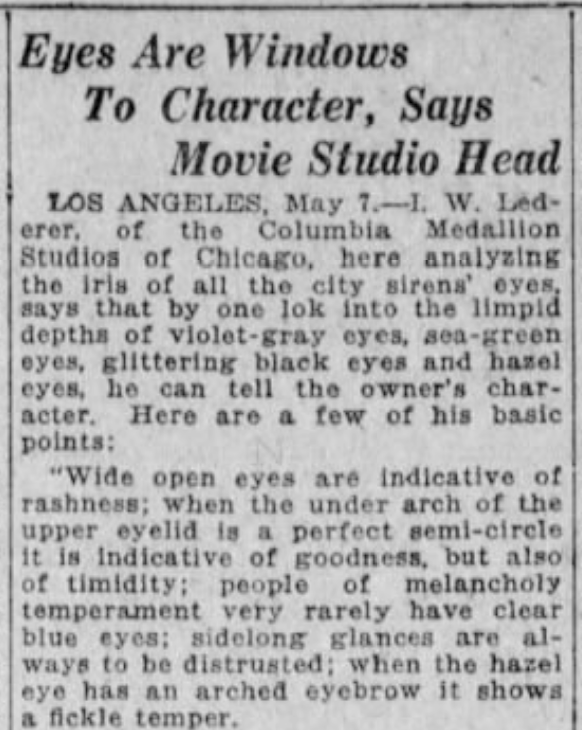 “I.W. Lederer of the Columbia Medallion Studios of Chicago,” the article began, “here analyzing the iris of all the city sirens’ eyes, says that by one look into the limpid depths of violet-grey eyes, sea-green eyes, glittering black eyes and hazel eyes, he can tell the owner’s character.”

“Violet blue eyes are loving and ardent,” Lederer proclaimed, “but impetuous and do not show a high order of intellect. A glittering black eye expresses meagre intelligence, but often physical courage. Velvety brown eyes show intense feeling and are not often to be trusted.

“. . . Gray eyes turning green in anger or excitement are signs of choleric temperament. Gray eyes are those of intellect and a well-balanced character. When the upper lid covers half or more of the pupil the indications are of a cool, deliberate character.”

We don’t know exactly what Izri Lederer’s eyeballs looked like, but a safe guess would be that they suggested the temperament of an obnoxious rich man who likes to babble about pseudo science.

In any case, by the time the next big war rolled around, things had changed pretty dramatically for the photo medallion industry, such as it was. The Depression had cut down demand, rationing during World War II likely further tripped up production, and Izri Lederer was now pre-occupied with a new enterprise as co-founder and vice president of one of America’s first fast food burger chains, Wimpy Grills. 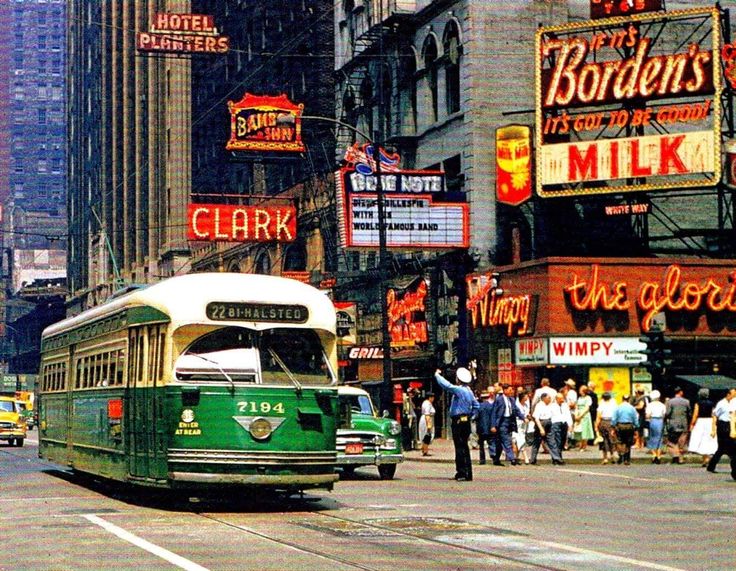 [The former Wimpy restaurant at 1 N. Clark Street. I.W. Lederer shifted from photographs to burgers in 1936, co-founding Wimpy Grills and serving as VP for many years]

Maybe even more importantly, better photographic technology now existed, giving people more confidence about the quality and longevity of the pictures they took. Plus, propping up a shiny photo medallion on a decorative easel just seemed like more of a Roaring ‘20s kind of thing to do anyway. What once brought amazement was now, ultimately, old fashioned and outdated.

The Columbia Portrait Co. and Columbia Medallion Studios faded away around this point in history, much like the name of the sailor suit kid featured on the medallion in our collection. If you recognize him, please let us know. Don’t let those memories grow dim!

[A former Columbia headquarters location at 6620 S. Cottage Grove Ave. Did they occupy that tiny building or something bigger it was once connected to?]

A sincere thank you to museum patron Ann De Cloux of Dubuque, Iowa, for donating this medallion to our collection! 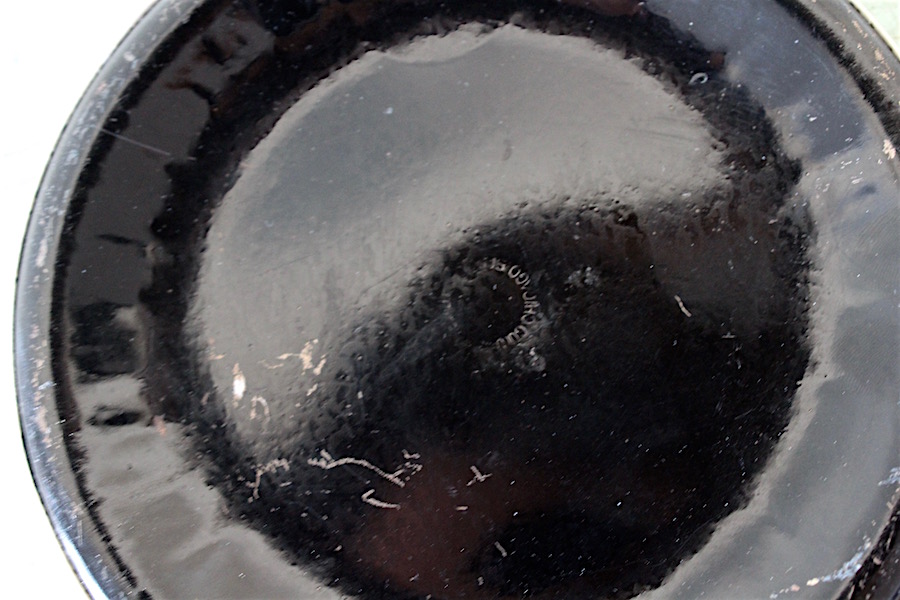 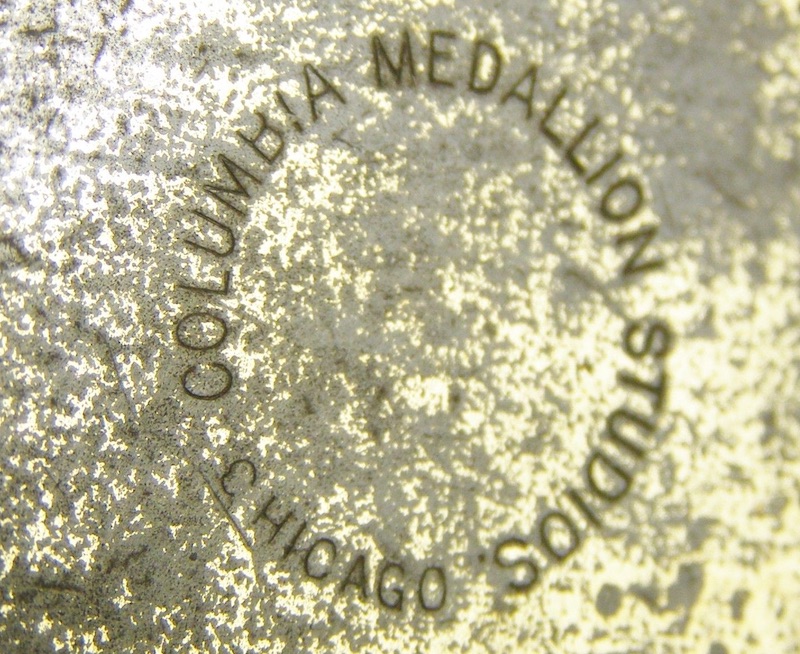 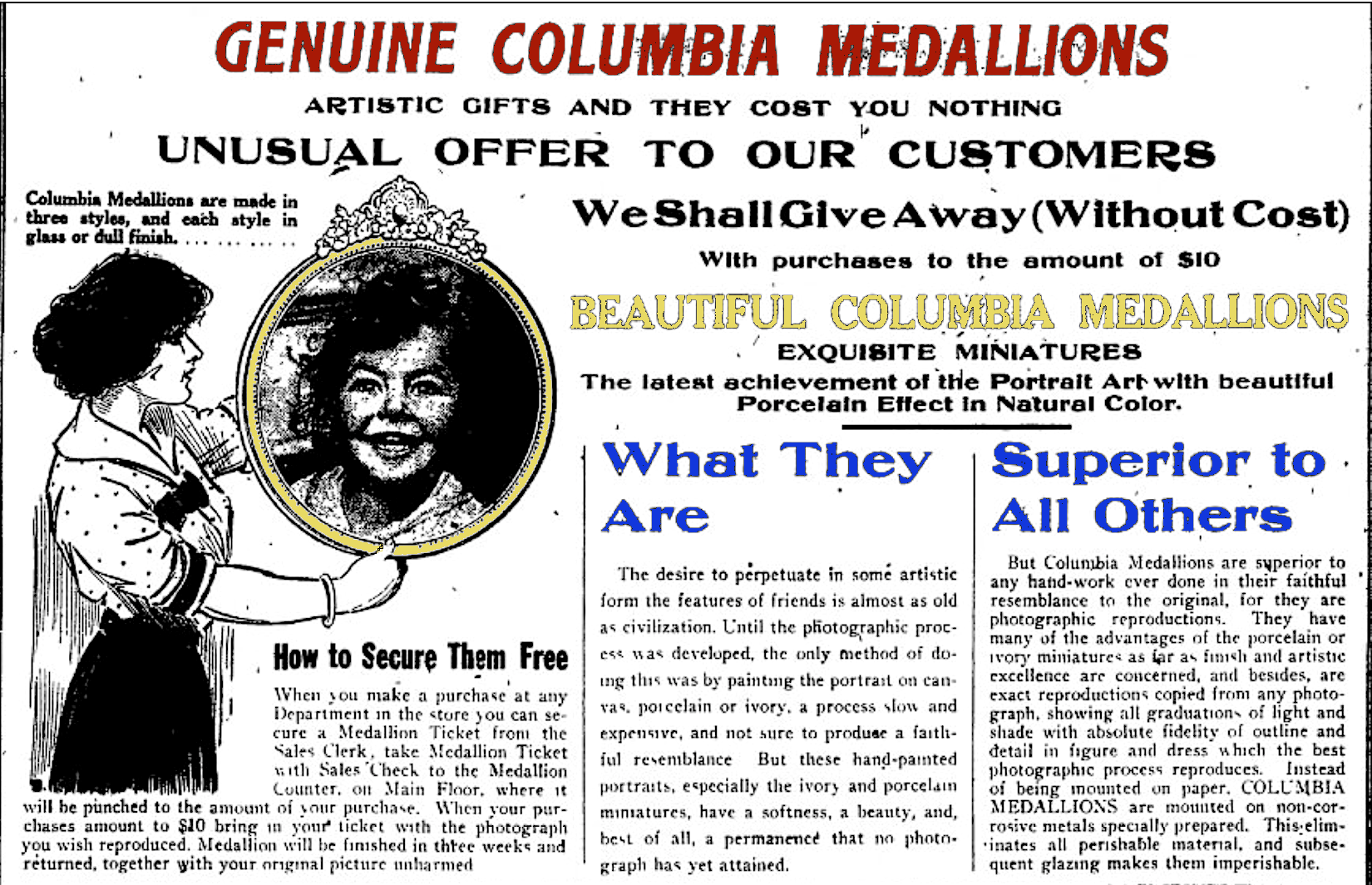 “There were other long-lived companies who made these sorts of photographic medallions for use in headstones; they are quite common in the Eastern European cemeteries on the northwest side.” —Mike Gebert, 2018